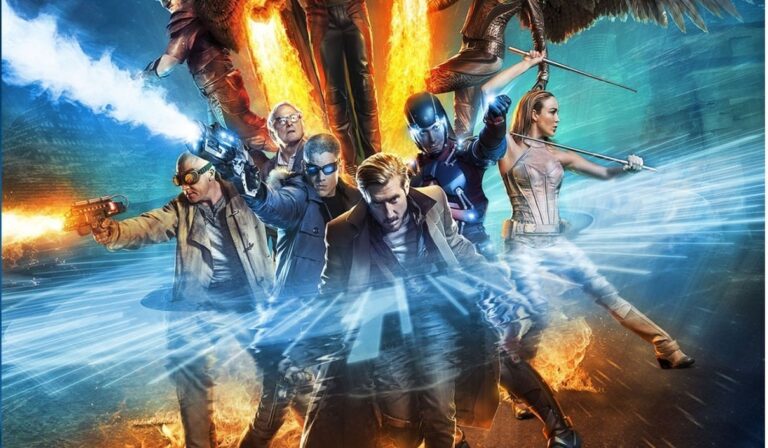 *Warner Bros. Home Entertainment provided me with a free copy of the DC’s Legends of Tomorrow Blu-ray I reviewed in this post. The opinions I share are my own.*

DC’s Legends of Tomorrow was definitely a wildcard going into the 2015 television season with its eclectic team of non-household name heroes and villains from the expanding DC Comics television universe on The CW. Season 1 ended up being quite a bumpy ride, but the highs outshone the lows in a series that never apologized for pushing the comic book limits of television.

The show consists primarily of supporting characters that have appeared on their Arrowverse counterpart shows Arrow and The Flash including The Atom (Brandon Routh), Captain Cold (Wentworth Miller), White Canary (Caity Lotz), Heatwave (Dominic Purcell), Firestorm (Victor Garber and Franz Drameh) and Hawkgirl (Ciara Renée). This team of heroes and villains is brought together by a Time Master from the future, Rip Hunter (Doctor Who‘s Arthur Darvill), to avert an apocalyptic future where the immortal Vandal Savage (Casper Crump) rules.

Legends excels at being an aggressively comic book show that pushes the limits of special effects that are possible on a television’s show’s budget – and that means a lot since The Flash airs on the same network and has done Emmy worth effects work in comparison. Everything from Rip’s spaceship, the Waverider, to the completely bonkers giant robot fight near the end of the season, everything looks impressive and is enormously fun to watch.

The overall first season consists of 16 episodes, but hits a lot of snags early on. Most of the Hawkgirl and Hawkman (Falk Hentschel) stuff fell terribly flat and in doing so watered down the season’s Big Bad, Vandal Savage. But episodes like Star City 2046 (with guest star Stephen Amell) keep things interesting and the wonderful, western episode The Magnificent Eight that introduces Jonah Hex (Johnathon Schaech) starts a fantastic run of season ending episodes.

The Legends Blu-ray special features are adequate, but also missing some key elements. The set includes all 16 episodes of the first season in pristine HD and also comes with a Digital HD UltraViolet code so you can stream the episodes on your iPads, phones and laptops without needing your discs.

Strangely though, none of the special features include interviews or conversations with the principal cast members. There are no commentaries on any episodes and – even more odd – no deleted scenes. Instead your given a handful of featurettes that are all fairly solid, but don’t feel like main supplemental features.

Those featurettes include Jonah Hex: Hex Marks the Spot that goes behind the scenes of the excellent old west episode and also features interviews with Jonah Hex himself, Johnathon Schaech. Fans also get an impressive glimpse at what went into creating the tremendous effects that brought Rip’s ship to life in A Fantastic Voyage: Touring the Waverider Set, that features interviews with producers and crew.

History in the Making is my personal favorite of the group with an exploration of the facts and fiction that went into creating the multiple eras that the team traveled to in Season 1. The blending of history and comic book storytelling makes for fascinating subject matter. Also included is the token Comic-Con Panel from 2015 and the a Gag Reel that is mostly laugh-less with the exception of a fake intro for the show as if it was made in the 80s.

Wanna support The Nerd Repository? Click the linked image below and buy DC’s Legends of Tomorrow – The Complete First Season through our Amazon Store!

The debut season is extremely uneven, but its just crazy enough at times to work as it leads up to a very promising and strong set of closing episodes. This Blu-ray set's special features are also uneven, providing some interesting content, but also missing some key extras.