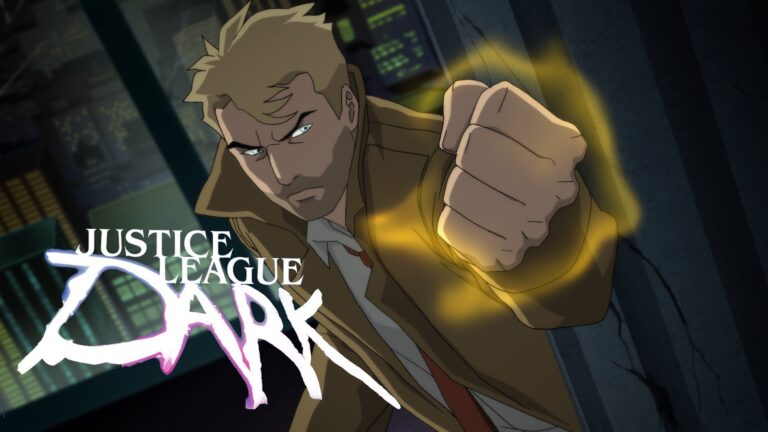 Who you gonna call when dark magical forces beyond even Batman’s understanding threaten to take over the DC Universe? No, not the Ghostbusters, but the off-shoot superhero team of Justice League Dark featured in the newest animated film within the DC Animated Universe continuity.

After an opening sequence of seriously disturbing multiple death’s involving the supernatural, a message tells Batman to look for the notorious dabbler into the mystical arts, John Constantine, played by Matt Ryan reprising his role from the live-action NBC series and appearances in the CW-verse. Batman then seeks out Zatanna (Camilla Luddington) to aid in contacting Constantine and the trio unite and slowly gather a team of heroes, including Deadman (Nicholas Turturro), Etrigan the Demon (Ray Chase) and Swamp Thing (Roger Cross), all created through various forms of dark magic, to combat the unraveling mystery threat.

Justice League Dark was a very pleasant surprise and one of the best overall films recently put out in the DCAU by Warner Bros Animation. Fans of the cancelled Constantine series get a fantastic reprisal from Matt Ryan and the added bonus of the great Jeremy Davies (LOST, Justified) reprising his role from NBC show as well. It’s a great day and age to be a comic fan, when even cancellation won’t keep a good character portrayal from existing elsewhere.

On top of these extremely satisfying character continuations, you also have a very well plotted out film. Not only do you have regular Justice League members and their respective voice actor reprisals including Batman (Jason O’Mara), Superman (Jerry O’Connell) and Wonder Woman (Rosario Dawson), Justice League Dark also introduces Green Lantern John Stewart (Roger Cross) along with the entire roster of the JLD in surprisingly smooth fashion throughout the course of the story – all without feeling overloaded or shoe-horned in to have more recognizable heroes in the film.

DCAU vet Jay Oliva also delivers some inspired fight sequences taking full of advantage of the use of superpowers alongside magic. Fans of the recent Marvel hit Doctor Strange will get a similar fix of martial arts Magic-Fu that’s a visually incredible feast and enormously fun to watch. There’s also quite a bit more humor than normal due to some snappy dialogue from Constantine and a few other quite hilarious interactions.

Justice League Dark also has going for it that it’s not really based on any particularly beloved storyline from the comics. That being so allowed for a story that actually had me guessing at a few points and legitimately surprised at others. Hopefully Warner Bros decides to do more stories with the JLD because this one was highly enjoyable – not to mention I’d love to see characters like Doctor Fate or The Spectre added to the team’s roster.

Wanna support The Nerd Repository? Click the linked image below and buy Justice League Dark through our Amazon Store!

A twisting, sometimes violent story is told through the eyes of great new characters and returning fan favorite reprisals to make this release an action-packed, wholly satisfying dive into the darker realms of the DC Animated Universe.