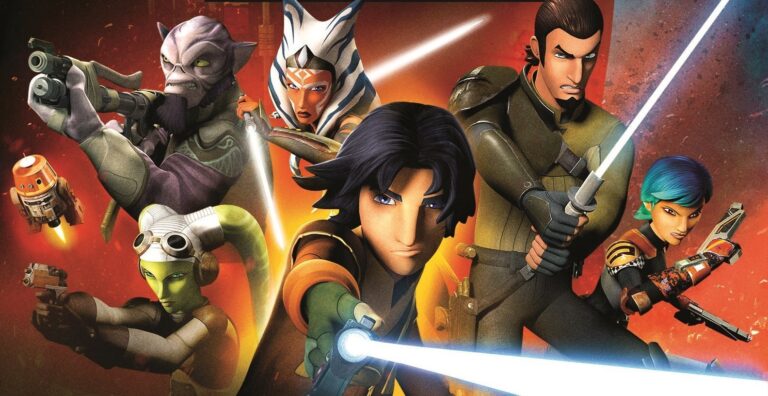 Star Wars Rebels Season 2 has a little something for every type of Star Wars fan out there. The 22 episodes are near perfection in how they balance both the Original and Prequel Trilogy storytelling and aesthetics, while hitting that second season sweet-spot with its own characters and creatures created for the show.

Star Wars Rebels Season 2 sees the Empire’s shadow continue to grow as Kanan (Freddie Prinze Jr.) and the crew of the Ghost leave Lothal and get swept into an even greater Rebellion they didn’t even know they were already a part of. Now that we’ve gotten to know these characters in Season 1 in the smaller setting, Season 2 really allowed the creators to come out, blasters blazing, to give the fans a heaping of everything they’ve always wanted on the show.

The biggest of which was a new cast addition in the surprise return of Star Wars: The Clone Wars fan-favorite Ahsoka Tano (Ashley Eckstein), helping lead the Ghost crew into the bigger Rebellion. Season 2 also opens with the episodes The Seige of Lothal and closes with Twilight of the Apprentice – both featuring Darth Vader (voiced by James Earl Jones!) stepping into the fray with a portrayal that, for once, depicts him as the extremely powerful monolith that instills fear in even the most powerful, as was alluded to in the Original Trilogy films, but never really seen before.

Besides numerous other appearances by beloved characters from the Original and Prequel Trilogy (Leia, Lando and more!), Season 2 also sees characters like Ezra (Taylor Gray) make large steps forward in character growth – specifically Ezra from the plucky kid, to a conflicted powerful adult with an impressive connection to The Force.

There’s so much to like in Season 2 that even the slower, smaller episodes are still quite good and provide some of the better stories ever told in the Star Wars universe. Rebels also happens to still look gorgeous, and the HD quality on the Blu-ray really brings out the beauty in the character and vehicle aesthetics, including all of the Ralph McQuarrie-inspired color schemes and designs used in the show.

The Star Wars Rebels Blu-ray has some most impressive special features, although is missing a few things that I think should be mandatory for all releases these days. From Apprentice to Adversary: Vader vs. Ahsoka is an excellent Blu-ray exclusive feature with Dave Filoni, the genius mind behind Star Wars: The Clone Wars and Star Wars Rebels. The title itself is a mild spoiler, but Filoni gives fans some fascinating insight into how he approached this emotional, monumental battle between these two characters with such rich history together.

Connecting the Galaxy: Rebels Season Two is a fun little feature, especially for the less hardcore Star Wars fans out there pointing out the wealth of Easter eggs and references to the greater Star Wars universe that were carefully planted throughout Season 2. I consider myself a Star Wars aficionado, but even I missed some of them during the season.

While the provided special features are all great in their own ways, the collection of extras still seems a bit slim and is sorely lacking a Digital HD option to view on your mobile device or laptop, since people rarely have Blu-ray players on them outside of their homes these days. Also, while you can’t really do a Gag Reel from an animated series, surely there were some extra animatics or deleted scenes that could have been shared as a separate feature.

Wanna support The Nerd Repository? Click the linked image below and buy Star Wars Rebels – The Complete Second Season through our Amazon Store!

Season 2 on Blu-ray is a must own for Star Wars fans, if only for the episodes featuring long-awaited appearances by fan-favorites Darth Vader, Princess Leia and more - not to mention some fantastic character growth and nuanced storytelling featuring Kanan, Ezra and the rest of the crew of The Ghost. The special features provided are minimal, but excellent - although the lack of a Digital HD streaming option hurts the purchase value for fans.