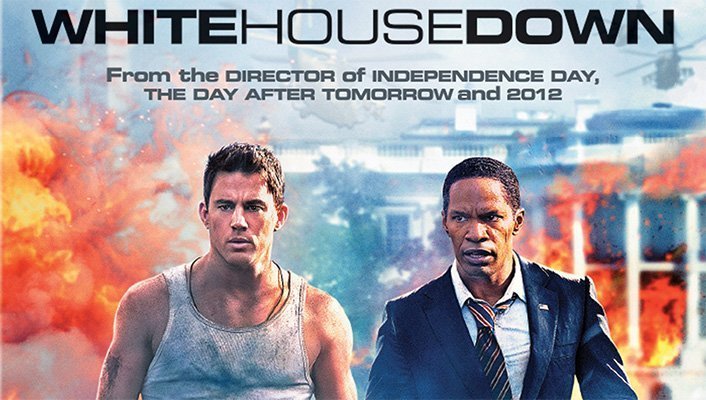 The first trailers painted this film as a grim, melancholy tale of America in its darkest hour, and serves as a shining example of the complete disconnect between filmmakers and marketing teams. White House Down is stuffed to the gills with explosions, shootouts, and wisecracks, and feels reminiscent of 80s action fare like Die Hard or Lethal Weapon, complete with scenery-chomping villains and a seemingly indestructible hero that continually defies impossible odds.

If you’re in the mood for an exciting and humorous caper with a pair of likeable stars and plenty of gunfire, you could do a lot worse than White House Down. It’s a great throwback to the sort of action films that Hollywood seems to have forgotten about, and further cements Tatum’s status as a bankable leading man.

No surprise here, but Sony delivers another top-notch video transfer with White House Down. Emmerich is known for breathtaking visuals in his directorial efforts, and his work has never looked better. Colors are bold and vibrant, and whether in the dimly lit catacombs beneath the White House or on the front lawn of the compound, nothing looks artificial, with details remaining crystal clear even in the most hectic action sequence.

When it comes to supplements, White House Down is positively loaded, with plenty of featurettes that take fans behind the scenes of some of the film’s biggest action sequences, including the destruction of the Oval Office and the creation of the Presidential limousine. While there’s plenty to sift through, it’s worth noting that there are no deleted scenes, and a commentary track is noticeably absent, as well.

Consumers that pick up their copy from Target stores will also benefit from All Access with Channing and Jamie, an extended featurette that delves into the fantastic chemistry between the two stars, and features exclusive interviews with Emmerich, Tatum, and Foxx. It’s humorous and informative, and if you’re planning on picking this one up anyway, you might as well spring for the extra content on the Target release.

White House Down may not have been the best film of the summer, but it was certainly one of the most fun, and this Blu-Ray release knocks it out of the park with a gorgeous video transfer and a plethora of bonus features. Action fans should be relishing an opportunity to add this one to their collection.