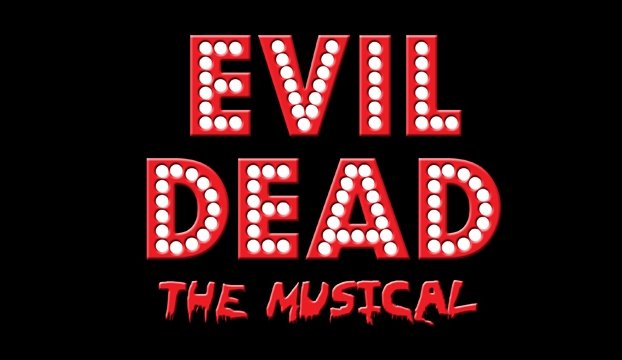 Evil Dead: The Musical is finishing up it’s run at the Mesa Arts Center this weekend and its a show Deadites can’t afford to miss. I caught up with director/co-creator Christopher Bond to talk all things S-Mart and get into what it took to create the cult classic in musical form. Check out the highlights below:
For you personally was Evil Dead: The Musical something you wanted to make?
Chris Bond: Well, you know, I am a bit of a Deadite myself, I think one of the first horror movies I ever saw was Evil Dead 2 and I loved it. When you kinda get into the [original Evil Dead] trilogy, it’s stuff I kind of can’t factor, it’s kinda cheesy, so some of the gore came off as comedic. So I think Sam Rami just kinda went with it in Evil Dead 2, kind of just did the whole movie over again, made it more slap stick and comedic and way over-the-top with the gore. The third one, Army of Darkness is this crazy ass adventure.
So, I don‘t know, the next logical step is to make Evil Dead into a musical. I want to go see zombies sing and dance. I get it. I seemed to sink back and I thought, I should make a show. I had just been a part of a production of The Rocky Horror Picture Show. So I saw this, not just as a show but an experience. Having the audience participation, it was more of a party than it was just going to see a musical. I really wanted to recreate that, but make something new even crazier and over the top.
And I remember Evil Dead 2 and thinking you have this hero who is battling this cabin, these evil forces and the cabin comes to life. To me it said, ‘It’s like a guy against a set, you know! This whole world around him is attacking him and everyone is going crazy, but then we sing and dance, and it’s done comedically. It just seemed to make a lot of sense, you know. It just seemed like a really good idea.
I remember telling my Mom I am going to make an Evil Dead musical and she said, “That’s crazy!” There were a lot of people I knew out there who enjoyed marrying musical theater and horror stories. [Laughs] And it just kind of worked out, you know.

‘Evil Dead: The Musical’ – Photos Do Not Represent Current Touring Cast
What went into creating the scares and the gore, and the Deadites in this production, because surely it had to take some production design and some know how?
Chris Bond: Yeah, sure! Well fortunately, we have been doing this for a long time. We wrote the show back in 2002, and it was very small in the beginning and then it kind of exploded. We did an off-Broadway production in 2006. And just to be completely clear, THE SHOW IS NOT SCARY! It’s a comedy. It’s a musical comedy done with lots of gore, but done in a kind of comedic, over the top, silly way.
So, there are some eerie moments, we like to set up the fun with some chilling, and brooding and a little spookiness, but if you are coming to the show and worried about being scared? I wouldn’t worry about that. This is just a fun, party, crazy, hilarious night out. Nothing to be afraid of.
As far as the effects go, there are a lot of stage effects. There is stage blood. We have pretty fancy zombie make-up, latex painted masks that are formed to everyone’s face. There are all kinds of stage effects, in all the different ways we fire the blood. We have a whole blood system. Some are done with really campy delivery systems and others are pretty fancy and pretty technical with our pneumatic air pressure system.
We are making blood comedy magic happen before your eyes, so there are some expensive and fancy parts and there are cheap and easy parts, and I think that’s what makes the show so much fun!

‘Evil Dead: The Musical’ – Ash, Jake and Linda – Photos Do Not Represent Current Touring Cast
What do you find is the most talked about thing right after seeing the show? Is it the blood? Is it the songs?

Chris Bond: It’s tough to say. The blood effects are so cool and I think people are surprised what we can do on the stage and it’s so much fun. Hardcore fans of the films, I think they are just impressed with us paying justice to the films. Obviously there are some liberties taken, but it is all done in the spirit, and lovingly done so of the films. All the iconic moments, all the iconic imagery, those moments you loved, are all in the show. And even from lines and beats, to just things on the stage like our set deck and they’re all little bits and things you’ll recognize from the cabin and films.

The characters, the costumes, these obviously are amped up a little bit, and we play on things a little bit, but it’s all there. So if you’re a fan of the films, you literally get everything. All the lines, all the characters, we mirror the characters of Evil Dead 1 and Evil Dead 2 in one show. There was no Jake in Evil Dead 1, but you know he’s in our story, along with all of the original cabin kids. And we have all the cheese ball lines that Ash says from Army of Darkness.

So I think fans come out of [the show] not being pissed off that we screwed with their favorite movie. But meanwhile people who are not fans of the film – and we stress this a lot, you don’t have to love Evil Dead to love this show. It’s a great, hilarious comedy on it’s own. People not knowing a thing about Evil Dead or horror movies, come out laughing like crazy because it’s a fun, party-like atmosphere. The songs are catchy and fun. It’s all lyrical comedy driven. It’s all funny lines and crazy stuff. Comedy is number one. You don’t have to be a genre or zombie fan or anything like that to love this thing. It really is for everybody.

What do you think has changed most from the original production to the current show that is being put out today?

Chris Bond: You know, when we first did it, we did it at a bar in like 2003. Obviously there was some development and changes made in the show. Since then, for the New York production off-Broadway we rewrote the ending and added a new song at the end. And I think there was another song added to the show, but you know, I think the show has changed the most in blood. Just more and more blood.

And more effects, and crazier fights and dancing. The show just gets bigger and bigger. We just keep amping it up, you know, cause it’s so much fun, and we just discover more fun things. And then someone says, “Hey you know what would be cool? If the blood exploded out of this?” And then we just make it happen. So it’s been too fun. We’ve even had fans that have been like, “You know what would be awesome? If this happened.” And we’ll be like, “Hmm, can we do that?”  We’ve worked with some pretty great blood people and effects people that make these dreams a reality.

Not withstanding, the show on its own is great. It’s not just slinging blood everywhere. It’s hilarious, beautiful music. Fancy choreography. It’s big lights, sounds, effects, it’s all there. Great acting, great performances. So there literally is a little of everything. There are puppets, and stage combat. It’s a very hard show to execute but it’s so silly and fun, you don’t feel like it is. If you’re in the audience you think those guys are having so much fun up there, but it’s a hell of a lot of work.

In this day when everything has tie-ins and licensing issues, did you have any roadblocks trying to get the rights from Evil Dead?

Chris Bond: I’m sure if we tried to do this today, we would have all kinds of problems. Fortunately it was 2002 and we literally found Bruce Campbell’s email on the internet, and just sent him an email. So we’re like, “Hey! We’re just a bunch of guys, a bunch of kids who graduated school and got this idea to do an Evil Dead musical and I’m sure you guys remember when you just got out of film school and you shot Evil Dead up in the cabin. We can see you guys didn’t have any money, and that’s us! We’d love to put this on in a bar. Would you let us do it?” And you know Bruce was really cool, he said, “That’s the stupidest thing I’ve ever heard of. Sounds great.” Bruce Campbell is exactly as he is on TV. He’s like that fun and kinda kooky and he’s great. Super supporter of the show.

And he basically pointed us in the direction of the film studios that own the rights to the film, and we told them what we wanted to do. We were very small potatoes at the time and they just said, go ahead. Go ahead and we’ll see how it goes. We were fortunate, not a lot of films being made into musicals back then. Since Evil Dead, there has been Re-Animator, and Toxic Avenger and everybody kinda doing what we did first. And we’re proud that we kind of pioneered this. We were dealing with a time in early 2000s, a property that definitely had a cult audience but it wasn’t  as in the main stream as much as it is now.

I don’t wanna say we had a part in reinvigorating the brand, but it certainly didn’t hurt that all of a sudden this cult movie that no one has heard from since the late 80’s, early 90’s is being built into a musical. And then all of a sudden there’s a remake and a TV series (Ash vs Evil Dead). So we are proud to be a part of the canon, you know, part of the Evil Dead legacy.

Bruce has been a big champion of the show. He’s come to openings, signings and Q&A’s for the show, and he’s supported us. We couldn’t be happier. And to be honest, we are thrilled about the TV show. The remake was fun (Evil Dead 2013), but totally different and outside of the canon of what I think the show is, or Evil Dead was, and I think fans enjoyed it, but I think it’s different.

This is the Evil Dead that the fans know and have wanted. It’s great to have Bruce Campbell back, and doing his thing and just giving the brand even more awareness. And hopefully people will discover Evil Dead just like you and I have, and maybe they’ll check out the musical and have a blast.

Evil Dead: The Musical is playing nightly at the Mesa Arts Center through Nov 15th. Tickets are still available here.

Negan, Do You Kiss Your Mother With That Mouth?