Interview: Vivek Tiwary on Taking ‘The Fifth Beatle’ From Page to Screen 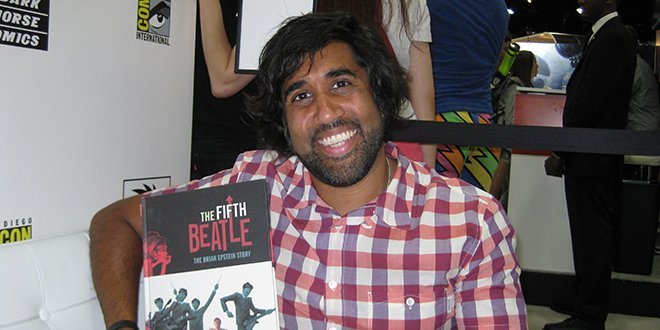 If you’re a fan of The Beatles or you just enjoy a really great story, and you haven’t read The Fifth Beatle yet, you’re officially missing out. During this year’s San Diego Comic Con, and just days before he received the Will Eisner Award for Best Graphic Novel (Reality Based),  I had the opportunity to sit down with author Vivek Tiwary to talk about the inspiration behind the graphic novel, and the process of adapting it for a feature film.

The story centers on the man behind The Beatles, Brian Epstein, often referred to as “the fifth Beatle.” As Tiwary put it, “Brian was my historical mentor and a source of inspiration for me when I was in business school.”  To be a gay Jewish man in the sixties in Britain, where homosexuality was against the law, must have been an incredibly difficult existence. But Brian rose above much of that to chase the whimsy and help make four boys from Liverpool the greatest musical act in the world. Inspiration, indeed!  After 20 years of research and another 10 years perfecting the story, Tiwary feels that he has successfully “sung the unsung story of Brian “Eppy” Epstein.”  Next stop: Hollywood.

Having written the screenplay himself, I asked Tiwary for a bit more insight into what we can expect from the film adaptation. “It’s an expansion rather than adaptation,” he told me.  “There are entire sequences in the film that don’t exist in the book, and some in the book that aren’t in the film.”  There were two main reasons for this that he shared with me. “I love film and comics, and I feel they both have different strengths. So there are certain things that work on the page that won’t work on the screen, and vice versa. Plus there is only so much story you can tell in 128 pages of a graphic novel.”

The second reason is the one that should have any fan of The Beatles excited. For the first time ever, with permission from Paul McCartney, Ringo Starr, Olivia Harrison, and Yoko Ono, a film has exclusive rights to use the entire Beatles catalog. So naturally,” there are a lot more music sequences in the film!”  Not even Back Beat or Nowhere Boy got that opportunity.

With lots of enthusiasm surrounding The Fifth Beatle in Hollywood, I asked if there were casting news he could share with us. “We do have a list, and we’re in some conversations, but unfortunately I can’t tell you. But I will say we’re at a very exciting place with the film.” So I asked the next obvious question, any chance we will get a Paul or Ringo cameo?  He said that neither have been approached, but if the opportunity presents itself…

As with the graphic novel, he said this is about doing justice to the story but hopes to have it ready for release either at the end of 2015 or early 2016.  In the meantime, if you want to follow all the news about the project, you can find it on Facebook or Twitter (@thefifthbeatle).