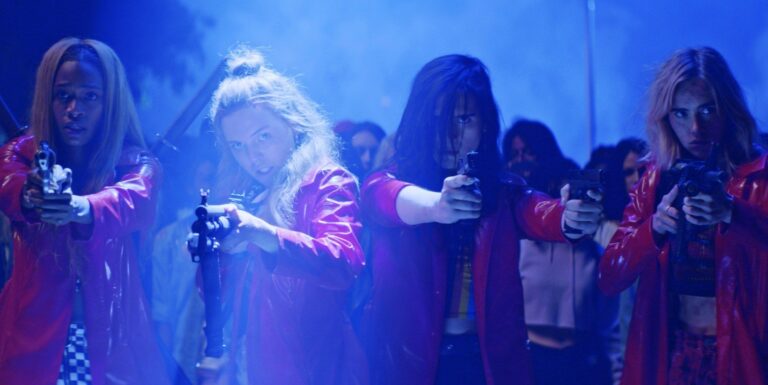 The opening moments of Assassination Nation, director Sam Levinson’s no-holds-barred indictment of the toxicity that permeates so much of our modern culture, warns viewers precisely what they’re in for. “This is the story of how my town, Salem, lost its motherfucking mind,” narrates one member of the film’s quarter of heroines, before supplying a helpful “trigger warning” of the content audiences are about to experience, running the gamut from drug use to nationalism to sexuality, homophobia, and transphobia, among plenty of other choices.

Lily (a fierce and fiery Odessa Young) and her three best friends – Em (Atlanta based musician Abra), Sarah (The Bad Batch‘s Suki Waterhouse), and Bex (Transparent‘s Hari Nef, continuing to impress) – may not exactly be the Queen Bees of their suburban high school, but they’re definitely among the upper crust, as evidenced by their frequent attendance at the coolest parties and their ever growing number of social media followers. Like the rest of their classmates, the girls quickly become obsessed when a trove of documents from the mayor’s cell phone reveal the anti-LGBT politician to be a closeted cross-dresser who frequently trolled Craigslist in search of same-sex companionship. It’s particularly vindicating for Bex, whose identity as a transgender woman is frequently threatened by those of the mayor’s ilk.

But the anonymous hacker responsible for the mayor’s downfall is just getting warmed up, with the school principal (a criminally underutilized Colman Domingo) the next target – although his alleged “sins” are much more ambiguous and open to a particular interpretation. The principal’s decision to publicly address the townsfolk is a shining example of how perception and mob mentality can easily overrule the tenets of logic and reason, and also lays the foundation for the fallout that ensues when the hacker strikes again, this time exposing the secrets of more than half the town.

It’s bad enough that a well-liked husband and father is revealed to be carrying on an illicit digital relationship with a teenage girl, frequently trading in nude selfies and explicit text messaging, but when Lily’s longtime boyfriend Mark (Bill Skarsgard) discovers that his sweetheart is the lingerie-clad vixen on the other end of the cell phone, he exacts revenge for his perceived “humiliation” by exposing her identity to the world. Soon, Lily becomes another type of target altogether, plagued by whispers and furtive glances as she walks the hallways of her school, and stalked by men who feel that her willingness to take naked photos of herself somehow entitles them to her body, or drives them into a rage (in a particularly pointed bit of voiceover, Lily marvels over the phenomenon that a male’s response to a naked woman might be “I need to kill this bitch”).

Mere days after the secrets of Salem are available for public consumption, the town has worked itself into a frenzy searching for the culprit. Scores of people brandishing makeshift weapons and concealing their faces behind masks and bandannas – all deemed “good people” by the local sheriff, in an obvious jab at President Trump’s comments after the Charlottesville rally – roam the streets and terrorize citizens in their quest for information, until fingers are pointed squarely at Lily as the mastermind. The fact that her own life was irrevocably devastated by the information dump doesn’t register with the vigilantes, who are just as keen to inflict “punishment” on Lily’s circle of friends as they are the alleged perpetrator.

It’s no coincidence that Levinson chose Salem as the name of the town in which this tale unfolds, as the frenzied citizens are eager to blame a group of teenage girls for their woes, rather than accept responsibility for their own choices. And while Levinson’s film and its bloody, hyper-violent final act are ultimately meant to be satirical (I think), so much of it rings true that it may be difficult for certain viewers to stomach. Take, for example, a scene where the football team discovers their star quarterback (Danny Ramirez) hooked up with Bex during a party: their rage is so palpable that not only do they make plans to visit the QB’s house and beat him to a pulp, but subsequently force him to participate in a group effort to assault Bex. It’s a series of events that had my stomach churning, made all the more horrifying by the knowledge that these sort of actions are carried out on a daily basis in this country.

Levinson attempts to balance the scales by crafting a finale that draws influence from the sukeban films that became popular staples of Japanese cinema in the 70s and 80s – at one point, the girls are even glimpsed watching one such genre entry – and there’s an undeniable satisfaction that comes from watching our heroines fight back, marching down the street in glossy red PVC jackets and armed to the teeth will swords, knives, and automatic weapons. But even more powerful than this image is Lily’s venomous monologue about the real sickness: the hypocrisy that comes from giving young women an impossible set of standards to live up to, then simultaneously refusing to abide by those same rules and feigning outrage when girls opt to carve their own path.

It’s this kind of dissimulation that allows men to spend hours pleasuring themselves to pornographic websites, and then immediately castigate a woman for showing too much skin or sleeping with multiple partners. It affords men the opportunity to blame a teenage girl for the collapse of their marriage, while taking no responsibility for initiating and then maintaining the inappropriate relationship that led to its demise. It’s the same kind of thinking that blames a young woman for sexual assault because she was “dressed like a slut,” while dismissing the actions of the male who committed the assault with the old adage “boys will be boys.”

Men caught in any sort of scandal are often cast as the picture of righteousness while the woman is painted as some hedonistic devil, a temptress who somehow corrupted this otherwise upstanding member of society. It’s this notion that Levinson’s film rails against, while also taking shots at toxic internet culture wherein lives can be ruined with a few clicks of a mouse button, done strictly “for the lolz.” Well, guess what, boys? The fiercely feminine protagonists of Assassination Nation are fed up with this shit: they’re not gonna take it anymore, and woe to anyone stupid enough to get in their way.