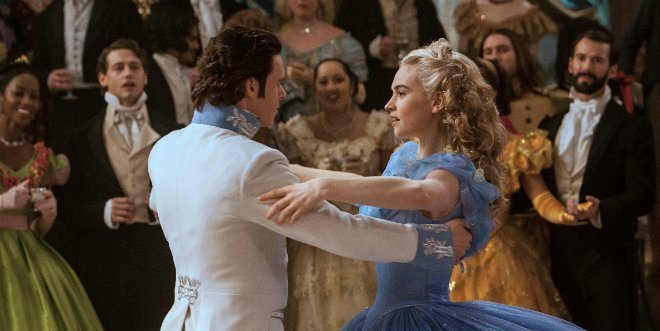 The latest installment in what promises to be a long parade of live-action updates to classic Disney stories, Cinderella revisits the beloved fairy tale with a few minor changes to spruce things up a bit. We all know the story of the kind young girl, abused and mistreated by her cruel stepmother and her equally vicious offspring, but screenwriter Chris Weitz introduces a few new twists along the way.

This time around, we actually get to spend some time with the girl’s mother (Hayley Atwell), who instills young Ella with the belief that one should always be kind and courageous. There’s also her doting father (Ben Chaplin), a merchant whose brilliant smile masks a sorrow the likes of which many of us can never know. As he continues to grow older, and his daughter (Lily James) blossoms into womanhood, he decides to remarry.

The new addition to the household is Lady Tremaine (Cate Blanchett), who arrives along with her dim-witted daughters Drisella (Sophia McShera) and Anastasia (Holliday Grainger). The trio scoffs at the simple country dwelling that Ella and her father call home – their tastes are much more refined, you see – and it doesn’t take long before Lady Tremaine is throwing lavish parties and rubbing elbows with all manner of noble folk.

When Ella’s father succumbs to illness on a business trip, the young girl is devastated. So is Lady Tremaine, albeit for different reasons entirely. “We’re ruined,” she tells her daughters, storming off while Ella weeps in the foyer after receiving the news. Soon, the household staff are dismissed and Ella finds herself cooking, cleaning, and sewing, resigned to living in the attic, while her new relatives continue to squander what little money the family has left.

Most of this probably sounds familiar, and indeed, the film hews closely to the 1950s animated version, but another significant revision occurs when Cinderella – a moniker bestowed upon her by one of her stepsisters – encounters the Prince (Richard Madden) while riding in the forest. Captivated by her beauty and impressed by her spirit, he convinces his father (Ben Jacobi) to extend invitations to the upcoming Royal Ball to commoners and nobles alike, hoping for another meeting with the mysterious woman from the forest.

You can probably guess where things go from here: a pumpkin turns into a carriage, mice are transformed into horses, and Cinderella gets a pair of glass slippers. All of this comes courtesy of her fairy godmother (Helena Bonham Carter in a delightfully silly appearance), and Cinderella is off to the ball with a spell to mask her identity, enjoying a lovely evening with her handsome Prince before racing out of the palace as the magic begin to wear off.

While the narrative may not have undergone the same sort of bold – and ultimately flawed – retelling as last year’s Maleficent, director Kenneth Branagh makes old feel new again with spectacular costumes and dazzling production design. Nearly every frame of Cinderella is stunningly gorgeous, and the special effects – of which there are many – bring to life the magic of the animated classic in breathtaking detail.

Likewise, the performances are every bit as strong as the visuals. James approaches her role with a plucky, spirited confidence, while Madden dials up the charm to full volume, but it’s Blanchett who really stands out here. Malice seems to drip from her pores and emanate from every fiber of her being, and her abject cruelty toward Cinderella is both terrifying and heartbreaking.

But this is Disney, after all, and audiences should know they’re in for a happy ending. In fact, you shouldn’t be too surprised to learn that the film’s final act also bears a striking resemblance to its animated counterpart. This new Cinderella certainly won’t be taking home any awards for originality, but what it lacks in new ideas it more than makes up for in the sheer quality of presentation.

This new Cinderella certainly won't be taking home any awards for originality, but what it lacks in new ideas it more than makes up for in the sheer quality of presentation.