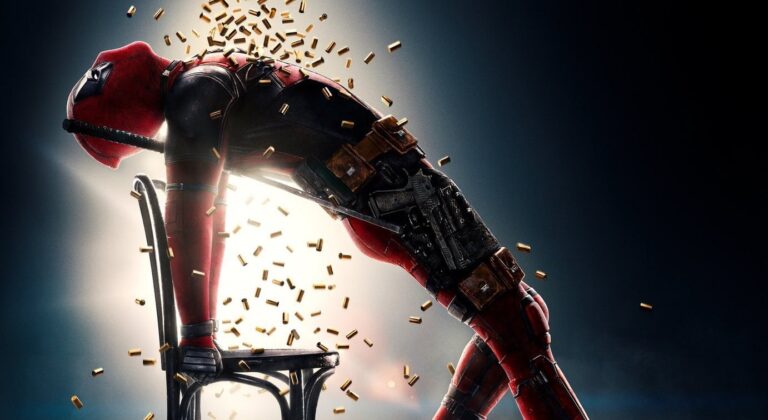 Maximum Effort is an understatement for what would be required in order for Deadpool 2 to live up to the expectations set by the surprise smash hit original. The irreverent mix of raunchy, violent humor and Ryan Reynolds’ dry sarcasm in Deadpool caught audiences off-guard and destroyed their expectations. Once again defying the odds, the franchise breaks the story mold of the original and crafts something wholly new for Deadpool 2 that succeeds with bloody style in nearly all ways comedy (or superhero) sequels normally fail.

Obviously, Reynolds reprises the role of Wade Wilson aka Deadpool, the hideously scarred mercenary with the Weapon X healing factor. While the first film was primarily a romance/revenge story, this sequel is an unapologetic family tale (I know!) with Wade and Vanessa (Morena Baccarin) discussing the possibility of having a child. From there… well, things escalate quickly, but we won’t give away the actual plot details of the film – that would do a great disservice to Deadpool 2 effectively ruining one of the strongest assets of the sequel: its legit surprises and unspoiled laughs.

While the marketing is purposely a bit misleading, it’s still safe to say the core of the film revolves around Deadpool’s decision to protect the life of young wayward mutant Russell (Hunt for the Wilderpeople’s Julian Dennison) from various threats including the time-traveler from the future, Cable, played by Josh Brolin.

The new lead cast members are used with great success in bringing out different character facets of Deadpool’s personality and playing off his larger than life persona. Dennison is still doing his petulant child with a love of hip-hop culture from Wilderpeople, but it works in this film and the character goes off into some interesting directions that the young actor tackles with his usual offbeat charm. The dynamic between these core characters create a narrative that actually gives Deadpool 2 something the original was a bit short on, the much dreaded “E” word: emotion!

Brolin, on the other hand, is taking his Marvel victory lap after his tremendous performance as Thanos in mega-blockbuster Avengers: Infinity War by bringing to life another 90’s comic favorite, Cable, with the appropriate grumpiness and badassery. The extra bulked up actor looks visually fantastic as the half cyborg and goes back to the deadpan comedic foil role that he did so well as one of the lone bright spots in Men in Black 3.

Not to be left out, Atlanta actress Zazie Beetz debuts as Domino, the luck-manipulating mutant with comic ties to X-Force, Deadpool and Cable. Beetz is great in her limited screen time as she listlessly wanders into action without a worry, giving the manic Deadpool a calm, nonchalant antithesis that brings a cool factor to the team.

The returning supporting cast all maintain roughly the same screen time, showing unexpectedly wise restraint as with many of the decisions within the film. The X-Men Colossus (Stefan Kapičić) and Negasonic Teenage Warhead (Brianna Hildebrand) continue to try to provide a positive path for Deadpool in their own unique ways. The duo have plenty of moments to flex their immense powers during the action, while eliciting laughs with their diverse personalities.

Oh, and since I mentioned X-Force, Deadpool is indeed forming the team this time out including the previously mentioned Domino, Terry Crews as Bedlam, Lewis Tan as Shatterstar, Bill Skarsgård as Zeitgeist, Rob Delaney as Peter, and the mysterious Vanisher! Just wait until you see all of them in action… it’s worth the price of admission.

Putting fandom aside and focusing on the sheer entertainment factor of Deadpool 2, it’s nothing short of massive. The laughs start immediately with the insanely brilliant intro/opening credits sequence and never stop until the equally insane mid-credits stingers. Meanwhile the action is just as inventive and gory as the first film – it may never actually top the set-pieces of that film, but Deadpool 2 is at least on par with its predecessor.

The only aspect of the film that occasionally misses are the numerous fourth-wall breaking humor and meta jokes that are the character’s trademark. Deadpool 2 unleashes rapid fire laughs at the audiences in furious degrees and succeeds an impressively high percentage of the time, but as with any comedic film there are going to be clunker jokes and the film is no exception – although it’s tough to really pick at the humor in this otherwise incredibly funny sequel.

Despite being very skeptical this film could live up to expectations, I walked out of the screening with the immediate urge to ride this wacky, gory sugar rush of a movie again as soon as possible. Deadpool 2‘s story is better, the laughs are original and gut-busting, and the action is over-the-top and brutal providing the many ingredients to fill out this delicious chimichanga of a sequel.

The story is arguably better, the laughs are original and gut-busting, and the action is over-the-top and brutal providing the many ingredients to fill out this satisfyingly delicious chimichanga of a sequel.