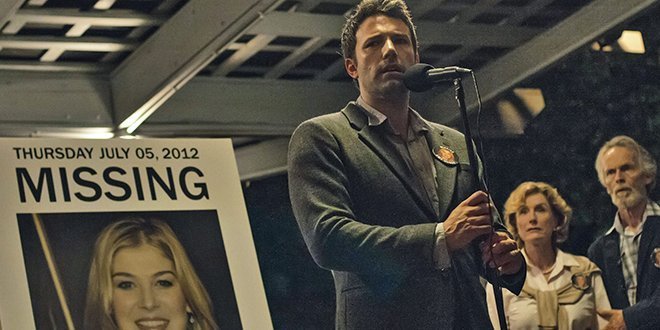 My first exposure to Gone Girl came when I devoured Gillian Flynn’s critically acclaimed novel in less than two days, frequently succumbing to thoughts of “just one more chapter” and finding myself still engrossed some 30 minutes later. With its captivating characters and painstakingly constructed mystery, Flynn’s complex, multi-layered thriller was the very definition of “page turner,” and when news broke that David Fincher was interested in bringing the novel to life, I couldn’t think of a better pairing.

On the morning of his fifth wedding anniversary, Nick Dunne (Ben Affleck) comes home to find the front door open, the glass coffee table in the living room destroyed, and his wife, Amy (Rosamund Pike), nowhere to be found. Detective Rhonda Boney (Kim Dickens) and Officer Jim Gilpin (Patrick Fugit) are the first responders, and they immediately get the sense that Nick isn’t telling them everything – for example, if the living room was the scene of a struggle, then why aren’t any of the photos on the mantel turned over?

That’s just one of several unanswered questions that begin popping up as Nick is scrutinized, first by the police, and then by the media as Amy’s disappearance quickly becomes headline news. Nick certainly doesn’t seem like a guy distressed about his missing wife, and as Amy’s diary entries (presented as flashbacks) begin filling in some of the blanks, we start to wonder just what else Nick might be hiding, and if he knows more about Amy’s whereabouts than he’s letting on.

In a wise move that pays dividends in the finished product, Flynn herself was tapped to write the adaptation, stripping the story down to its most important elements while still maintaining the frequent juxtaposition between Nick and Amy’s conflicting points of view. While some purists will complain that the film lacks much of the novel’s nuance and subtleties, it’s hard to find fault with a screenplay that was written by the author of the source material, particularly when the results are so impressive.

Fincher’s involvement is another necessary cog in the machine, as even with Flynn’s screenplay this film could easily have fallen apart in the hands of a lesser talent. Never one to shy away from the darker side of humanity, Fincher obviously feels right at home playing in this sandbox and exploring the terrible things that a once-loving couple can do to each other in times of duress. This also marks Fincher’s third collaboration with Trent Reznor and Atticus Ross, whose original score once again perfectly complements the visuals by accentuating, but never overpowering, the onscreen proceedings.

But even with all these elements in place, Gone Girl still wouldn’t work without being anchored by absolutely stellar performances across the board. Pike is at her career best, particularly in the film’s second half, and should find herself positioned as a major contender for this year’s award season. Affleck is no slouch either, being tasked with a lot of the weightier moments and nailing them like a seasoned pro. Affleck expertly plays up Nick’s winning smile and boyish charm, but there’s also an almost uncontrollable rage bubbling just beneath the surface, and his portrayal should give those Batman v Superman detractors plenty to reconsider.

Some audiences may balk at Gone Girl‘s 149-minute running time, but the film is so meticulously paced that it never really slows down long enough for moviegoers to glance at their watches. Each scene is allowed just enough time to breathe before we’re rushing onward, and every single component is so incredibly, undeniably good that you won’t want to miss a single second. Pound for pound, Gone Girl is 2014’s best offering thus far, and should prove to be stiff competition for the rest of the year.