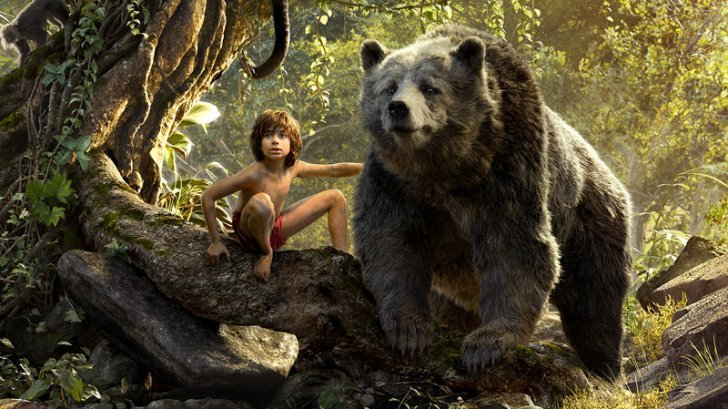 Disney’s ongoing quest to recycle their classic animated properties and turn them into live-action blockbusters is currently in full swing, and while the results have been somewhat mixed – I loved Cinderella, but was underwhelmed by Maleficent – the box office returns are more than enough reason to continue this trend until the entire Disney library has been exhausted. Which brings us to the studio’s latest offering, Jon Favreau’s stunningly beautiful rendition of The Jungle Book.

A “man cub” abandoned at a young age, Mowgli (energetic and endearing newcomer Neel Sethi) was rescued from certain death and given to a pair of wolves, Akela (Giancarlo Esposito) and Raksha (Lupita N’yongo), who raised the boy as if he were one of their own. Mowgli learns how to run and hunt with the rest of his pack, but is never averse to using his humanity to gain an advantage, a habit which frequently earns him the admonishment of Bagheera (Ben Kingsley), the panther who found him when he was still an infant.

With a severe drought threatening the jungle, the predators and prey gather to form a temporary truce aimed at securing everyone’s survival. But when Mowgli is spotted by the vicious and vindictive tiger Shere Khan (Idris Elba), he reminds the other creatures that “Man is forbidden,” demanding the boy’s life as retribution for an earlier encounter with Man that left him scarred and blind in one eye.

Despite Raksha’s defiant promise to protect her son at all costs, the wolves know that Shere Khan will eventually come for the boy, and even their superior numbers won’t be enough to combat his strength and brutality. At Bagheera’s insistence, Mowgli agrees to leave the jungle and return to the Man Village, but his escape is thwarted when he and the old panther are ambushed, sending Mowgli further into the jungle on his own.

While most of the events leading up to this point in the film are decidedly more mature than typical Disney fare, Mowgli’s encounter with a honey-obsessed bear named Baloo (Bill Murray) considerably lightens the mood. The tonal shift could easily have been a jarring one, but Favreau smoothly handles the transition so that it feels like a natural progression. Mowgli is still keenly aware that he’s in danger, but his reluctance to leave his home and the addition of a powerful – if lazy and manipulative – new ally is enough motivation to stick around, particularly since the two companions are having so much fun together.

But Shere Khan isn’t the only danger lurking in the shadows: there’s also Kaa (Scarlett Johansson), an enormous python with a soothingly seductive voice and a knack for hypnotism, and King Louie (Christopher Walken), a towering gigantopithecus that commands his legion of followers from the ruins of an ancient city, and wants Mowgli to teach him the secret of Man’s deadly red flower, fire. Audiences familiar with the original animated film might raise an eyebrow at these two casting choices, but in context they’re every bit as strong as the rest of the film – especially Walken, whose scheming orangutan has been recharacterized as more of an underworld boss than a smooth-talking song-and-dance man.

Filmed entirely on a soundstage in downtown Los Angeles, Favreau and Disney have crafted one of the most incredible technical achievements I’ve ever seen in a film. Not only have the incredibly lifelike animals been rendered through computer wizardry, but so have the environments themselves. From the trees to the grass to the waterfalls, everything you see in The Jungle Book has been manufactured by the most talented digital animators in the industry, and the results are nothing short of breathtaking. There isn’t a single moment that feels fabricated, thanks largely in part to Sethi’s commitment – as a first-time actor performing against a green screen, he completely sells the audience on the idea that everything around him is real. Even though some of his line readings may lack the emotional heft that could have been conveyed by a more seasoned talent, we never question that his friends and their surroundings actually exist.

The Jungle Book may not be a beat-for-beat remake, but the 1967 animated classic – which was the last film personally supervised by Walt Disney himself – is clearly the biggest source of inspiration for Favreau and screenwriter Justin Marks, although they wisely mine material from some of author Rudyard Kipling’s other works. Favreau also borrows several moments from The Lion King, including a wildebeest stampede through a ravine and another iconic shot that we won’t spoil here. Even Shere Khan himself is eerily reminiscent of Scar, though Elba’s performance is admittedly much more sinister and terrifying – so much that parents may want to consider leaving younger children at home, as the villainous tiger might be a bit too frightening for some youngsters.

Despite crafting a remarkably beautiful and emotional film, Favreau’s biggest mistake is the decision to include two beloved songs from the original film. I’ll freely admit to smiling at the image of Mowgli and Baloo floating down the river singing The Bare Necessities, but the tune’s inclusion doesn’t make The Jungle Book a better film – it just feels like pandering. Even more grievous is Walken’s rendition of I Wan’na Be Like You, with slightly altered lyrics to reflect that this King Louie is a different species – it not only feels out of character for Louie himself, but for the film as a whole.

Minor stumbles aside, The Jungle Book still packs plenty of emotional wallop, with action sequences that will set heartbeats racing and quieter moments that will have audiences reaching for the nearest tissue. Mowgli’s journey to find his place in the world serves as an allegory – thinly veiled though it may be – about the true nature of family, a message that should come across loud and clear to parents and kids alike. And it certainly doesn’t hurt that Favreau delivers that message in such an astonishingly gorgeous package.

Favreau's rendition of this Disney classic is a breathtaking, remarkable technical achievement, featuring some of the most lifelike and believable creatures - and environments - ever rendered by a computer. Luckily, the film is every bit as good as the technology behind it, and should easily become the definitive version of Rudyard Kipling's time-honored tale.