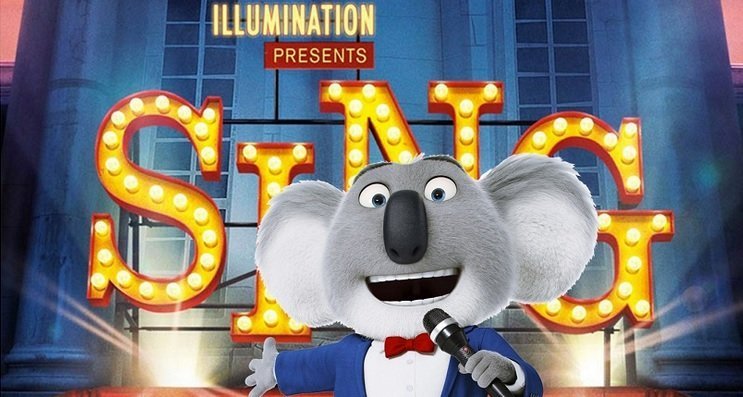 Sing is the latest animated extravaganza from Illumination Entertainment, the studio that brought you The Secret Life of Pets, and is yet another disappointment for their films that don’t star Minions. It’s clear that Illumination has good ideas and can get a hell of a group of promo trailers together for their films, they just have trouble backing them up with a captivating story.

Matthew McConaughey stars as Buster Moon, a koala with a can-do attitude, whose love of the stage has him running his very own theater – which unfortunately is failing. Buster is then inspired to put on a singing competition in hopes that the attention will be just what he and his aging theater needs to keep his beloved business afloat.

The premise is solid enough and the film easily connects the story dots in order to fill out the cast with other animal contestant roles voiced by famous celebrity actors. Reese Witherspoon is an overwhelmed housewife pig looking for appreciation, Seth MacFarlane does what he does best as a smarmy, Sinatra-style mouse, Scarlett Johansson is a punk rock porcupine, and Taron Egerton is a cockney Gorilla with a crook for a father that wants him to focus on the family crime business.

It all sounds cute enough, but much like The Secret Life of Pets, the best moments in Sing are spoiled in the trailers, in this case within the ones that showcased the auditions. This film doesn’t go nearly as off the rails as The Secret Life of Pets, but up until the last act of the film, Sing just moseys along with few instances of dazzle or even a laugh out loud moment – it’s just “fine,” and never crosses the line into bad territory or anything all that fun.

Sing has a little bit of fun with its massive catalog of pop culture songs and how the animals choose to make the hits their own. These types of jokes and scenes will please the little ones, but they feel cheap/lazy and a few of the songs licensed don’t seem to have any purpose in the context of the story, and are merely there because the song is popular.

The cast isn’t to blame and many of them have quite impressive voices to go along with their acting talent. Reese Witherspoon was particularly cute and Scarlett Johansson has a surprisingly strong rock voice. McConaughey also plays against type as Buster and drop his trademark brooding drawl for an upbeat, bursting-with-optimism performance.

Unfortunately when it call comes down to it, Sing is passable entertainment but frustratingly lacking a real pop. If it weren’t for the last second save with the rousing third act, I would have been writing an even more scathing review for a film that I really wanted to love, but walked away from disappointed by Illumination Entertainment once again.

The film would've been better suited as a group of short films spotlighting the auditions rather than stretching the premise into a full-length movie. What the audience gets is a lazy story that relies too much on its collection of licensed pop songs to coax out any of the comedy or excitement.