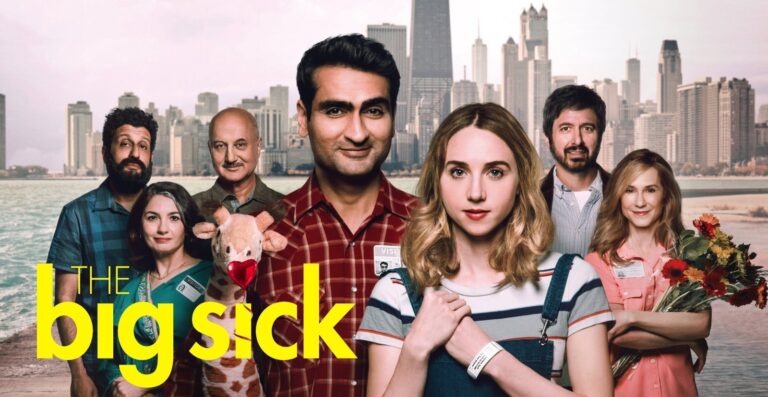 Kumail Nanjiani is one of the funnier names working in comedy, but yet many probably don’t recognize his face aside from his wonderfully dry character on HBO’s Silicon Valley. The show’s role is fitting since much of his early comedy career specialized in the “nerd” or “geek” realms of entertainment. Now with the somewhat autobiographical indie flick The Big Sick hitting theaters nationwide, Nanjiani is making the leap to a starring role in a possibly career-defining turn for his sweet (and sometimes bitter) story of love and family.

The life of a stand-up comedian is commonly rife with drama and tragedy that in turn inspires that person’s resulting humor and wit. Projects like Judd Apatow’s Funny People or more recently the Jim Carrey-produced I’m Dying Up Here have shined an interesting light behind the scenes of that culture. The Big Sick takes place in that world and peels back the curtain a bit, but is more about the burgeoning relationship between stand-up comedian Kumail (Kumail Nanjiani) and the adorable Emily (Zoe Kazan).

Not only does Kumail have to continually justify his career choice to his family, he stays busy spurning the advances of multiple women his parents want him to accept for an arranged marriage per their cultural beliefs. His decision to keep this a secret from Emily explodes in his face as the two begin to come closer. The relationship disintegrates before Kumail’s eyes until without warning Emily becomes unexpectedly ill with a condition that puts her into a coma, baffling everyone – including her doctors.

Kumail is the only local available point of contact for Emily and sees no other choice but to head to the hospital when he gets the call to be there for Emily before her family arrives, despite their awkward separation. When Emily’s mother (Holly Hunter) and father (Ray Romano) arive, fully aware of the intimate details of their daughter’s relationship and break-up with Kumail, things become increasingly more awkward.

Since the film is loosely based on the real relationship between Kumail and The Big Sick co-writer Emily V. Gordon, the sincerity and genuine way that scenes and conversations play out are undeniably authentic. The amount of emotion and personality put into every nuance of the characters could only come from real life experience, and Nanjiani and Gordon found the comedy and absurdity in their story.

While Nunjiani makes a solid effort with his dry comedic delivery and loving personality to anchor the film, it’s his co-stars that really shine. Zoe Kazan is just fantastic as Emily and you never once doubt their onscreen relationship is anything but real love. Her performance lingers over the film while she’s in the coma and bursts with life and personality during any scene in which she’s awake and on camera.

Emily’s parents are played with wonderful quirk by Hunter and Romano, with neither actor going too far out of their comfort zone. Hunt is reliably excellent as always and Romano nails a role that fit his talents well. But Kumail’s onscreen family also brings some huge laughs to the table, led by Bollywood legend Anupam Kher as Kumail’s father. On the other hand, Kumail struggles a bit with some of the heavier scenes – his strengths don’t lie in dramatic acting, but the talented cast help pick up the slack.

The Big Sick clocks in at just over two hours, which is far too long for the film to stretch out the story it’s trying to tell. A slimmer edit could have streamlined the humor and dramatic moments for a more enjoyable film that doesn’t hit all the common indie dramedy formula beats. The Big Sick also employs the annoying crutch of having its characters not communicate or do obvious actions that would avoid disasters in a situation, instead leaves the audience to bang their heads on the wall while watching a character lambaste themselves with mistake after mistake.

But negatives aside, what it all boils down to is that The Big Sick is still a very well-crafted and enjoyable effort. Zoe Kazan is amazing and the rest of the ensemble turn in great performances. The Big Sick is a heartfelt, funny experience that hits just about all the right notes.

This very sweet and unique approach to the standard indie dramedy benefits from a superb performance by Zoe Kazan and the film's supporting cast, providing a nice mix of laugh and heart - but occasionally buckles a bit under Kumail Nanjiani's dramatic acting abilities and the script's formulaic trappings.