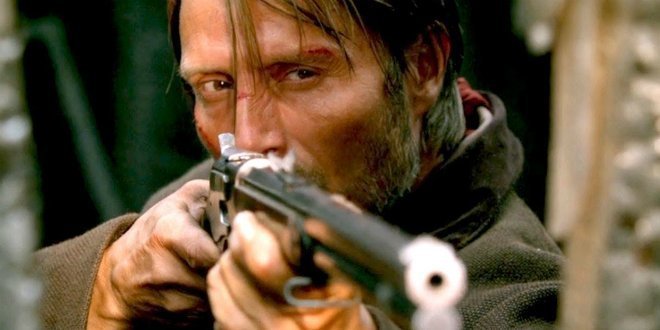 The year is 1871, and Dutch immigrant Jon (Mads Mikkelsen) is anxious for his wife and son to finally arrive in America. His joy is short-lived, however, when a stagecoach journey ends in a horrifying tragedy. Jon seeks out the men responsible, dispensing justice in the manner demanded by the lawlessness of the Old West – but things go from bad to worse when one of the dead men turns out to be the younger brother of notorious outlaw Henry Delarue (Jeffrey Dean Morgan).

Delarue promises to reign terror on the struggling town of Black Creek until his brother’s murderer is brought to justice, and the townspeople – led by a weak-kneed sheriff and a crooked mayor who moonlights as an undertaker – have little choice but to turn Jon over to Delarue’s men. But Jon has a brother of his own (Mikael Persbrandt), who isn’t afraid of Delarue, and isn’t ready to watch his brother perish at the hands of an outlaw.

The Salvation boasts solid performances from Mikkelsen and Morgan, the latter of whom seems to have been born to play this sort of role, but the true standout here is Eva Green. As the mute widow of Delarue’s brother, Green smolders and scowls from scene to scene, conveying pain and rage and sorrow without uttering a single word. She’s the most interesting character in this tale, and the film could have benefited from devoting more screen time to her.

The Salvation is a competent film, but everything about it feels generic. The narrative is basic Western 101, and the characters, action, and production design are all things we’ve seen before, in better movies. With the exception of a few laughable CG effects, there really isn’t anything bad about this film – but there’s not really anything good, either. It’s decidedly, unapologetically average – the sort of film that you shouldn’t rush out to see, but that you likewise shouldn’t go out of your way to avoid.

A competent film that is decidedly, unapologetically average. There really isn't anything bad about this film - but there's not really anything good, either.