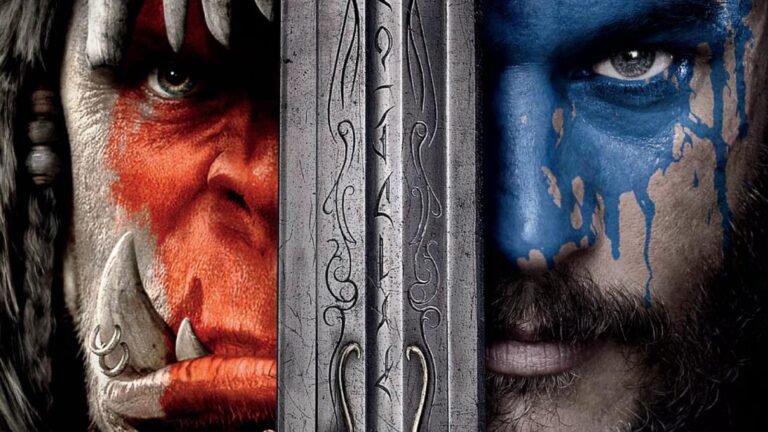 World of Warcraft is a bit of a holy grail for gamers, having captured the imaginations of fanboys for decades – so naturally a movie had to happen at some point. Legendary and Blizzard Entertainment sought some inspired choices to lead their Warcraft film with Duncan Jones, the director of the brilliant Moon, and the man with the craziest eyes in show business, rising star Travis Fimmel from History’s Vikings.

But despite the talent involved, Warcraft delivers some dazzling visuals and sadly not much else. The video game curse has still yet to be lifted on the silver screen and fans will now be left turning their hopes towards Fassbender’s Assasin’s Creed. Don’t hold your breath, guys.

Fimmel stars as Sir Anduin Lothar, a charismatic, unrivaled warrior who leads the Alliance’s (the human population) investigation into reports of giant monsters slaughtering their people. These monsters are the Horde, Orcs from another dying dimension that are led by the wicked warlock Gul’dan (Daniel Wu) who has more in mind than just conquering the Alliance.

Meanhwile, Orc chieftain Durotan (Toby Kebbell) and his wife Draka (Anna Galvin) have their first child, a son, almost immediately after traveling to the Alliance dimension. As Durotan begins to see the malevolent intentions of their warlock leader, he must figure out a way to save his clan and unite with the Alliance in order to stop Gul’dan and save the very world they came to make their own.

I’ll admit that I knew very little of Warcraft and its characters and mythology prior to seeing the film, but I do love a good fantasy epic so I went in hoping for the best despite the early bad buzz. I found the film to be more entertaining than I expected, but also knew walking out of the theater I had not seen a great film.

The Orcs, especially Durotan, are all absolutely stunning technical achievements in CG. The designs are insanely detailed and are interesting both visually and in characterization. The amount of detail and personality in every single Orc onscreen is staggering. Toby Kebbell as Durotan is one of the best fully-realized CG characters ever on film, hands down. His eyes have the soul and knowledge that so often are missing in these characters. I would’ve gladly spent the whole film just with the Horde clan.

Unfortunately, the rest of the film is pretty terrible. The human Alliance scenes generally look awful and have shockingly bad green screen environments akin to something from ABC’s Once Upon a Time – in stark contrast to the beyond impressive Orc scenes.

The human acting is almost as bad as the CG environments and may be the first time on film that all the CG characters outperform the real life actors. Fimmel tries hardest and comes across the best, but his performance doesn’t hold a candle to any of his work on History’s Vikings. In fact, many times Lothar feels like a watered-down version of King Ragnar from that show, with Fimmel certainly using a lot of the same eccentricities.

Dominic Cooper (Preacher, Agent Carter) and Ben Foster are also particularly bad. Cooper plays King Llane Wrynn like a directionless wet blanket that feels neither heroic or kingly. Foster embodies the powerful mage Medivh, working to stop the sinister green magic of Gul’dan, but for a fine actor he somehow never feels like he has any gravitas in the role. He has a completely different tone to his performance in almost every scene, and occasionally even looks downright bored.

There’s also plenty of fantasy nonsense to explain away everyone’s motives and actions for convenience and exposition, but it’s a mixed bag. Certain things are over-explained, and other major elements, like powerful dark magic The Fel, get a mild mention in passing and then proceed to dominate the film with little explanation. Don’t even get me started on the half-human, half-Orc Garona (Paula Patton) and her sub-plot romance with Lothar.

Lastly in the negative department, I hope you like franchise setup – because there’s a lot of it here. In fact, the whole thing feels a bit like a prequel to a movie we haven’t seen yet. So much of the film felt like the filmmakers saying through subtext, “Don’t worry, this will make sense in the sequel.”

There has been talk that director Duncan Jones’ original cut of the film was close to three hours, but Warcraft clocks in at just over two. The good news is that the film is briskly paced and the two hours do go by quite fast. There aren’t too many slow moments to let you digest all the goofy goings on, which works to the film’s favor. I bet the three-hour cut would make the film more coherent, but would it make the film better? I doubt it.

Lastly, I do want to praise the effects and choreography of the epic fantasy fight sequences. They are extremely satisfying and definitely achieve that aspect of what the film wanted to accomplish. Cinematographer Simon Duggan uses sweeping overhead long shots to weave through these massive battles and achieves two things: allowing viewers to appreciate the scale of these battles in “real time” like shots, and giving a little wink and a nod to the overhead view of video games, namely World of Warcraft itself.

Besides the fantastic characterization of the Orc clans, Warcraft just doesn’t come through with any other element of its adaptation. The actors are off, the dialogue is sloppy, and there’s just far too much franchise setup to make this anything more than an occasionally very entertaining, but ultimately mediocre fantasy film.

The Orcs are an absolutely stunning achievement in CG/mo-cap character creation - unfortunately the rest of the film isn't anywhere near as good. The entertaining action sequences are the only relief to the uncomfortably awkward acting, bad dialogue, loads of exposition and non-stop franchise setups.