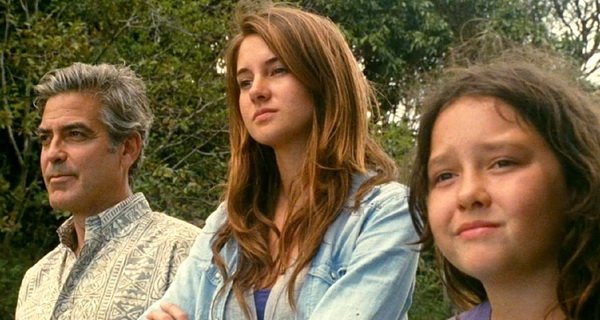 Alexander Payne hasn’t directed a feature-length film since 2004’s Sideways, but if you’re concerned that his seven-year absence might have dulled his storytelling skills, you can go ahead and put those fears to rest. The Descendants is the best film Payne has created yet, and features two career-defining performances, one from arguably the biggest movie star in Hollywood, and the other from an up-and-coming young actress that you’ll be hearing plenty of great things about.

George Clooney stars as Matt King, a Hawaiian native whose family is heir to a massive stretch of undeveloped beachfront property on the island of Kauai. As sole trustee, Matt must ultimately decide whether to sell that land to investors and make himself and his greedy, overbearing relatives rich beyond their wildest dreams.  In the midst of this conflict arises another issue of a much more personal nature: Matt’s wife, Elizabeth, is lying comatose after a boating accident, and she’s not expected to wake up.

Not only must Matt find a way to cope with this tragedy, he must also find a way to reconnect with his two daughters, the bratty but well-meaning Scottie (Amara Miller) and the angry, troubled Alexandra (Shailene Woodley).  When Matt finally breaks the news to Alex that her mother’s living will requests that she be removed from life support, she drops another bombshell: it seems that Elizabeth was having an affair.

Clooney expertly navigates the myriad of troubles that Matt is presented with, doing some of the most complex work of his career as he inhabits this disheveled, defeated man who tries so hard to do the right thing for everyone without having the slightest clue what the “right thing” is.  Clooney’s performance is buoyed by a terrific supporting cast, including Beau Bridges as a greedy cousin pressuring Matt to sell the land, and Robert Forster as Matt’s surly, tough-as-nails father-in-law.

While we spend most of our time focused on Matt, it often feels like the centerpiece of the film is Alex, magnificently portrayed by Shailene Woodley (in her film début) as the perfect embodiment of adolescent rage. The moment when she spitefully reveals her mother’s secret feels so authentic that the audience feels like they’re intruding on a real-life conversation between a parent and their angsty teen, but despite the character’s bratty nature, the bond she begins to develop with her estranged father as they embark on a darkly comedic quest for answers becomes the driving force of the film.

There’s not a single character in The Descendants that doesn’t have some sort of flaw, and the film makes no effort to paint them as anything but dysfunctional. We invest ourselves in the lives of these characters because there’s something about each of them that we can recognize and relate to. Nobody in this film is perfect, and that’s precisely what makes this a perfect film.