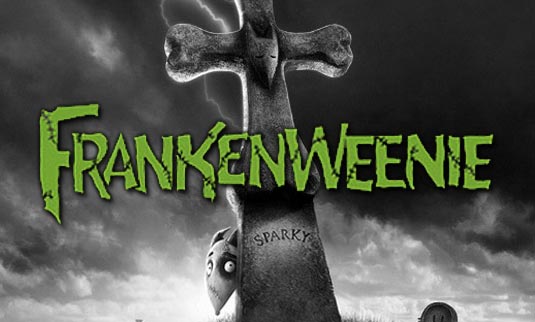 Halloween movie season is upon us, and while the box office is normally flooded with adult-oriented R-rated horror/thriller films, the kids are getting their fair share of seasonal themed goodness with ParaNorman, Hotel Transylvania, and (arguably) the most anticipated: Tim Burton’s Frankenweenie, based on Burton’s 1984 live-action short film that paid light-hearted homage to the classic Frankenstein tale. This time around, the story is presented in the director’s now trademark stop-motion animation, and while Frankenweenie hits darker notes than expected, it still manages to keep things light enough to be a delightful and gorgeous film for both young and old, and possibly a new seasonal classic.

Let’s be honest here, this one had the potential to be a dark, macabre affair. The premise revolves around a friggin’ dog dying for crying out loud, and Burton’s last foray into stop-motion animation was the far-too-goth, far-too-boring Corpse Bride, but this time around the final result takes great care to avoid having the dark moments overtake the wonder and fun of the film.

The cast is filled with some of the usual Tim Burton suspects and a few new additions. Martin Short is warm and comforting as Ben Frankenstein, the father to young scientist Victor, voiced by newcomer Charlie Tahan. Winona Ryder fits perfectly into the film while basically reprising her role of Lydia from Beetlejuice to bring Elsa van Helsing to life as the goth young love interest for Victor. Martin Landau is a scene stealer as the wise but intimidatingly scary new foreign science teacher Mr. Rzykruski (when pronounced, sounds like “Rice Krispie” whether intentional or not). And the always fantastic Catherine O’Hara plays Victor’s mom Susan, in addition to my personal favorite, the hilariously disturbed character “Weird Girl.” But surely the most common audience favorite will be Atticus Shafer as the appropriately named Edgar “E” Gore as the goofily evil hunchback classmate of Victor.  The young actor’s line deliveries are nothing short of riotous in every scene, pulling off the portrayal as troublesome, adorable and scary all at once.

There’s great love poured into the story and injected into the characters that inhabit the town of New Holland, where everything seems to have roots in classic horror history. The final act is a creature-feature blast that plays as a love letter to classic monster films and really gives the indication that Burton was having the most fun he’s had in a while, and the non-stop Easter eggs and references to the great literary and film horror creations alone are worth spending multiple viewings trying to spot.

Themes of this film are extremely complex for a kid’s movie and might be a bit off-putting for some, but in my opinion elevate this film to a higher level of complexity for adult viewers, while most likely going right over the heads of younger audience members. There are some strong points made about the ignorance of remaining uninformed on things as crucial to life as science and the downfalls of not seeking answers to big questions, not to mention the overall theme of the very definition of death itself. Yowza, that’s heavy stuff for a family film. But thankfully, Frankenweenie touches on these points but doesn’t spend the whole movie getting too preachy, and instead subtly weaves these themes into the overall dark fairy tale.

All that and I barely even mentioned the film’s visuals!  Oh the visuals! This is a remarkably beautiful piece of cinema, shot entirely in black and white and animated with mind-boggling smoothness. It oozes style. The talented animators involved are obviously at the top of their game here and never once do the visuals get that jerky stop-motion feel that would sometimes show up in movies that use this style. I love the character looks and set designs and really believe that in this medium the art style of Burton’s visual creations work best hands down.

Full of colorful characters (no pun intended) supported by strong voice acting and the ghoulish brilliance of the film’s look and design, Frankenweenie is a truly fun and imaginative modern Grimm fairy tale that harkens back to the director’s more beloved early career, and fits nicely with the spooky seasonal vibe of this time of the year.