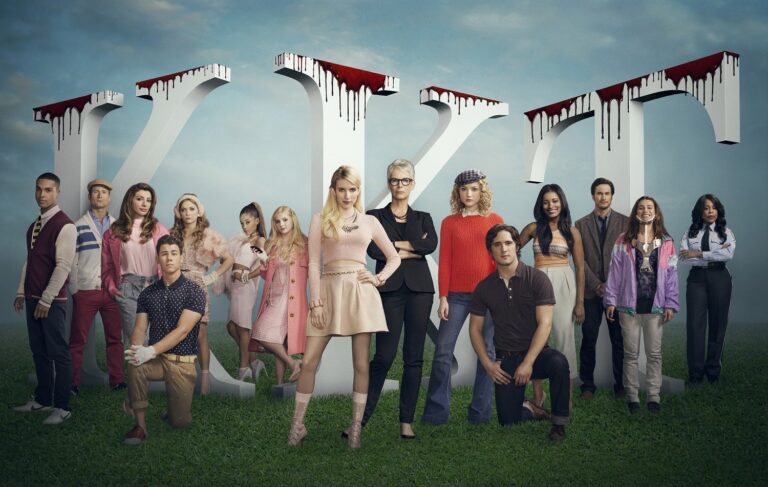 Fox’s Scream Queens is the latest offering from American Horror Story and Glee mastermind Ryan Murphy, and is an excellent blend of both show’s sensibilities. The series centers around a string of serial murders, committed by a killer dressed in a devil costume, that are aimed at Kappa House, a high-end sorority at Wallace University with a tragic past.

Scream Queens plays like a comedic mix of Mean Girls meets the original Scream, with a dash of American Psycho thrown in for good measure. The large ensemble cast features lots of characters to explore and undeniably many secrets to uncover. The mystery of the killer’s identity will be kept secret until the season finale and this two-part premiere (titled Pilot and Hell Week) sets everyone up as a potential suspect – at least everyone that survives.

Emma Roberts (American Horror Story) stars as Chanel Oberlin, president of Kappa House, and she’s a raging, narcissistic bitch. Roberts is absolutely hysterical in a role she seems born to play, walking the line brilliantly between vapid and darkly driven, like some sort of evil Elle Woods from Legally Blonde.

When Kappa House crosses the line one too many times, Kappa hater Dean Cathy Munsch decides to intervene and forces the sorority to open pledging to all students, even the uncool non-elite. Jamie Lee Curtis brings her scream queen Halloween cred as the Dean and hasn’t been this funny or unexpected in awhile. As the two-part premiere unfolds, the initial impressions given of the Dean start to slip away and you realize she is just as unhinged as the rest of the gals on the show.

Chanel also has her stable of sorority minions that cater to her every whim, hilariously dubbed Chanel #2 (Ariana Grande), Chanel #3 (Billie Lourd), and Chanel #5 (Little Miss Sunshine‘s Abigail Breslin) because she doesn’t care enough to remember their names. The Chanels are amusing, but the real laughs come from the Kappa pledges, including Glee alum Lea Michelle as the hilarious and overeager Hester.

Scream Queens features lots of standout side characters as well, and it’s not all just the girls. I can honestly say I’ve never heard a Jonas Brothers song or seen any of their movies or shows, but Nick Jonas plays sidekick to cool guy douchebag Chad Radwell (Glen Powell) in a laugh-out-loud role. Powell is no slouch either, and is really entertaining as a self-obsessed “bro,” creating the perfect male counterpart to Chanel.

The one aspect that really didn’t work for me was the second lead character of Grace Gardener (Skyler Samuels) and her dad Wes Gardner (Oliver Hudson). They’re meant to be the “normal” ones (even though they look more like a couple than father/daughter) surrounded by all these kooks, but end up just feeling like a tacked on B-plot for the first two hours. It’s pretty clear their story is going somewhere and the actors are likable enough, but they’re generally a bore in the premiere.

As the mystery continues to unfold, people start to die in gory, hilarious ways – unsurprisingly, there’s a fun twist to end the premiere, that surely will bring back viewers for the subsequent episode. Scream Queens is a dark, absurd good time that makes great use of its ensemble cast and packs in a quite a few laughs – and there’s a pretty good mystery to boot.