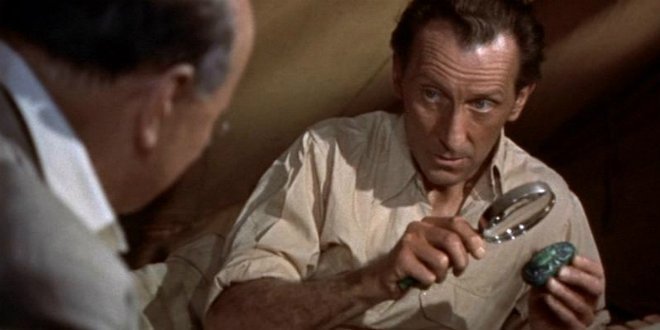 It’s the best time of year for tricks, treats, and terror, and we at the Nerd Repository wanted to help you with the toughest decision of the season: what to watch! Once the first wave of horror films died out in the forties it would be nearly ten years before a little British studio decided it was time to try to reinvent the genre, and not only were they successful in filling that void for almost thirty years, they provided us with some of the best acting and script writing during that time in the film industry. For those unfamiliar with Hammer Horror films, take the great ideas of the Universal classics, add some British stage acting, beautiful sexy starlets, lush scenery, and a splash of vivid color and you have it. So let the British invasion begin!

10. The Vampire Lovers (1970). Based on the controversial 1871 novel Carmilla, The Vampire Lovers tells the story of a female vampire named Carmilla Karnstein who has a desire for young beautiful girls. While it may not have the greatest acting, it is a worthwhile film to watch for several reasons. One, the film is carried by actress Ingrid Pitt playing the leading role, at a time when female villains were still something of a rarity. Two, the entire film is about lesbianism, a very rare and taboo subject for that time. Throw in a small Peter Cushing role as one of those hunting the vampiress, and you have a great way to spend 93 minutes of pure seductive horror. Why Hollywood has not invested time in revisiting this tale is beyond me.

9.  The Revenge of Frankenstein (1958). Unlike its Universal predecessor, the Hammer Frankenstein films based themselves on the tales of Baron Frankenstein, not the monster. This, the first of many sequels, finds the Baron after cheating death, running a medical practice under the name Victor Stein. His practice attracts the attention of a fellow doctor that recognizes Victor.  The two decide to join forces to help give Stein’s hunchbacked assistant a brand new perfect body of their creating.  As predictable, things go awry once the assistant is placed in the body.  The real reason to watch this film is the way Peter Cushing as completely embodied his portrayal of Victor Frankenstein.

8.  Paranoiac (1963). One of the best suspense thrillers released by the studio, this is a twisted tale of three siblings left in the care of their Aunt Harriet following the death of their wealthy parents. A few years later the eldest son, Tony, commits suicide by jumping off a cliff. Next oldest Simon has grown to be a sadistic cruel brother to younger sister Eleanor, so much so that he’s trying to drive her crazy in an effort to get all of the family inheritance.  Next twist, Tony returns to the family…or has he? Played full of twists and shocks that never let the viewer quite figure everything out until the end, and directed in the same vein as a Hitchcock film, Oliver Reed’s Simon is played as a true dark and disturbed soul.

7.  The Phantom of the Opera (1962). I feel there is some unwritten law that states every studio that fancies itself a horror studio must take a shot at Gaston Leroux’s seminal classic tale, and Hammer was no different. This time the phantom would be played by Herbert Lom and helmed by Hammer’s top director at the time, Terence Fisher. Far from perfect, largely due to the editing down to basically a PG rating, the film does have a true sense of grand gothic horror. You feel for the phantom while you struggle with the lengths he goes to for revenge. I recommend making it a triple feature with the two Universal versions and see for yourself which one captures the heart of the novel.

6.  The Hound of the Baskervilles (1959). With absolutely no disrespect to Robert Downey Jr. and Basil Rathbone, no one has played the British sleuth better than Peter Cushing. Anytime I read some of Sir Arthur Conan Doyle’s work, it is always Cushing’s voice and face in my imagination. Eccentric, overly dramatic, and a bit stand-off-ish, this is the definitive Holmes.The story has a few darker elements added for suspense and horror, but is otherwise pretty faithful to the source material. Eerie sets, great supporting cast, and if you enjoyed the most recent re-imagining of Holmes you owe it to yourself to watch this gem.

5.  The Curse of the Werewolf (1961). Many people don’t realize that the story of the wolfman from Universal’s marvelous film had its entire mythos made up for the movie. Hammer made a similar attempt to put their own spin on their werewolf by using elements from the novel The Werewolf of Paris. This made for quite a different story unfolding on the big screen. Conceived through the raping of a deaf servant woman by a wolf-esque man, the eventually birthed boy named Leon grows up suffering from bizarre episodes attributed by the church to be symptoms of lycanthropy. Starring Oliver Reed as the adult Leon, he steals every scene with his passion and sincerity. This is also the version of the half-man half-wolf creature that truly looks believable. Filmed on sets designed for a different movie, there is a true sense of a time period that the story unfolds in.

4.  Horror of Dracula (1958). The threesome of director Terence Fisher, and stars Peter Cushing as Van Helsing and Christopher Lee as the count deliver in one of Hammer’s biggest moneymakers – and for good reason. This Dracula was certainly not the charming version portrayed by Bela Lugosi, this Dracula was dark, sinister and not very talkative. Once again Cushing is the scene stealer of this film, but there is something Lee brings to Dracula that is unsettling. The scenes carry a very strong old country European vibe that sticks with the viewer. Some will argue a few of the sequels were superior films, but this is the one you think of when using the words Hammer and Dracula in the same sentence!

3.  Captain Clegg and the Night Creatures (1962). This is one of the timeless Hammer films that you can watch over and over and still find things to keep your interest. Dymchurch is a peaceful community governed by a vicar named Dr. Blyss in 1792. A Captain Collier and his men come to town to investigate reports of illegal smuggling and producing of brandy. While there, they also discover the nearby marsh is haunted by phantoms. This little town is also the grave site of the legendary pirate Captain Clegg… could all of these things be tied together? Cushing stars as Dr. Blyss and the great supporting cast also includes Oliver Reed. Told at a fast pace following several twist and turns, this is adventure-horror-action-suspense all wrapped up in one!

2.  The Mummy (1959). Hammer’s triplets of Fisher, Cushing, and Lee borrow lots of elements from Universal’s vault to weave together perhaps the best of all the Mummy films. Lee plays Kharis, the revived mummy out to bring back his love Ananka, whose tomb was raided by John Banning (Cushing) and his crew. Lavish sets with a very deliberate pace makes this film feel more menacing than other Mummy films. Throw in more gore and a stronger feel for atmosphere and color, and you have a true classic tale of horror and suspense.

1.  The Curse of Frankenstein (1957). This is the film that started it all for Hammer studios: Fisher, Cushing and Lee. And it also stands as the best Hammer picture of them all. Using a slightly different formula than that of Universal’s Frankenstein, this one focuses on the descent into madness that the doctor takes over his obsession with reanimating dead tissue. While telling the doctor’s tale, your anticipation for seeing the monster really starts to build as the story progresses. What a payoff the giant disfigured monster the imposing Christopher Lee makes! This is the brooding dark adventure of a mad scientist driven by obsession, brought to you the only way Peter Cushing could deliver it: perfectly! While Boris Karloff will always be the face of the monster, Cushing will always be the face of the mad Victor Frankenstein.

So this Halloween, instead of watching some of the second-rate slasher films or highly edited television versions, spend some time terrorized by hauntingly good acting, beautiful leading ladies, sharp directing, and spellbinding scenery, all brought to you by a little British studio from the fifties!