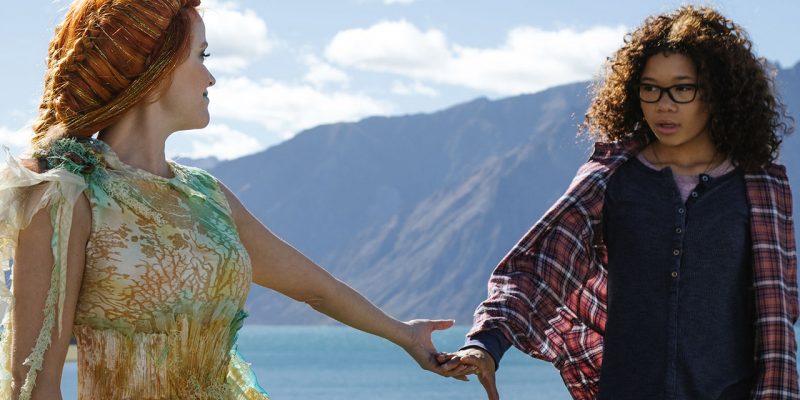 After helming the somber civil rights drama Selma and the harrowing prison documentary 13th, Ava DuVernay is shifting gears in a big way, making the leap to tentpole studio filmmaking – and becoming the first female director of color to helm a film with a budget more than $100 million – with an adaptation of Madeline L’Engle’s beloved sci-fi novel A Wrinkle in Time. The results are something of a mixed bag, with incredible visuals that often mask an underwhelming script, but DuVernay’s filmmaking prowess is at the forefront of Disney’s latest family adventure.
Four years ago, brilliant NASA scientist Alexander Murry (Chris Pine) vanished without a trace, not long after publicly revealing a hypothesis that man could travel vast distances across the universe with only the power of their mind – a theory met with ridicule by the scientific community. Dr. Murry’s disappearance leaves daughter Meg (Storm Reid) with a chip on her shoulder, a once-promising student whose grades are slipping and whose attitude often lands her in the principal’s office. “If your father walked through that door, what would happen?” an educator asks her pointedly, but he’s not prepared for Meg’s melancholy reply: “The world would make sense again.”

Meanwhile, Meg’s adopted brother Charles Wallace (Deric McCabe) has made contact with a mysterious stranger who calls herself Mrs. Whatsit (Reese Witherspoon), and who hints that Meg’s father may still be alive. She introduces the children to her companions: Mrs. Who (Mindy Kaling), clad in flowing gowns and speaking only in famous quotes from the likes of Shakespeare and Ghandi, and Mrs. Which (Oprah Winfrey), an ethereal being who manifests as a graceful, towering goddess. While the vision of a 50-foot Oprah with golden hair and a dress seemingly made of diamonds, looming over her companions atop a grassy knoll, might sound like a striking image, it’s barely a blip on the radar in a film stuffed to the brim with visual splendor.

After a lengthy bout of exposition, much of it delivered in uncharacteristically wooden fashion by Winfrey, the Mrs. Ws spirit the children away to Uriel, a distant planet with lush green hills and sapphire-hued seas, and it’s here where the film’s production and costume design are elevated to a new level entirely. Winfrey, Kaling and Witherspoon go through numerous costume changes, each more extravagant than the last, and the exotic locales include a labyrinthine cave that glows with an amber hue, and an uber-creepy Stepford Wives version of suburbia, where the houses, children and mothers not only look the same, but speak and act in unison. L’Engle’s novel has long been described as impossible to adapt, and while some elements may not translate to the visual medium, DuVernay and her team have done amazing work in creating a universe full of wonder and whimsy, from an army of sentient flowers who “speak in color” to a character that transforms into an elegant dragon-like being made entirely of leaves (and that bears more than a passing resemblance to a flying lettuce wrap – trust me, it comes off much better than it sounds).

At the center of the film’s adventure, Reid does a tremendous job of shouldering the film’s considerable emotional weight, and Disney execs should be thanking their lucky stars for such a fortuitous find in this talented young actress. McCabe is also strong, but with an uneven performance that finds him sickly saccharine during the film’s first half, and gleefully menacing for the climax, the latter of which helps tip the scales but never quite balances out. That being said, if anyone in Hollywood is plotting an update of Stephen King’s Pet Semetary, McCabe would be absolutely perfect. Elsewhere, Pan‘s Levi Miller shows up as a mostly forgettable romantic interest for Meg, complete with his own set of complications at home that never get resolved, and a bearded, bedraggled Chris Pine makes superb use of his limited screentime, especially in a few heartbreaking scenes opposite Reid.

The screenplay from Jennifer Lee and Jeff Stockwell is easily A Wrinkle in Time‘s biggest shortcoming, chock full of stilted dialogue and an endless series of contrivances that enable the characters to move from scene to scene with little regard for pacing or congruity. But DuVernay’s indie-film sensibilities allow us to accept the film’s flaws and still appreciate its strengths, in much the same way Meg learns that her own perceived imperfections are not the barrier to happiness that she believes them to be. In one particularly crucial moment, Mrs. Whatsit bestows upon Meg the “gift” of her own faults, encouraging her to embrace them rather than rail against them, and applying a similar strategy to the film will serve audiences well.

There’s an undeniable earnestness to DuVernay’s approach, and to A Wrinkle in Time‘s central message of finding the light within ourselves and using it to combat the ever-encroaching darkness of the universe (represented here by a nebulous, inky black creature known as “The It”). This full-bodied embrace of sentimentality may not work for the more cynical moviegoer, but the young adult audience at which the film is squarely aimed will surely spark to Meg, the awkward outcast who becomes a hero not because of a magic spell or a mystical artifact, but rather because she learns to believe in herself and her own potential. It’s a critical message that arrives at a critical moment, and the sincerity with which these themes are presented far outweighs the various hurdles the film encounters along the way.

A Wrinkle in Time arrives with a gorgeous 1080p transfer whose colors really pop off the screen, and the film’s digital photography provides for an incredibly sharp image. The extras are also solid, with a 30-minute featurette that explores everything from casting to costume design to shooting locations, and a director’s commentary with DuVernay and several members of her team, including screenwriter Jennifer Lee and visual effects supervisor Richard McBride, among others – it’s well worth a listen.

A Wrinkle in Time is a commendable effort from DuVernay as she tackles her first big studio project, and the film should resonate particularly with younger viewers, who will no doubt be entranced by the lavish production design, intricate costumes and bright colors. It may not be the instant classic Disney was hoping for, but it’s another enjoyable addition to the studio’s ever-expanding library.