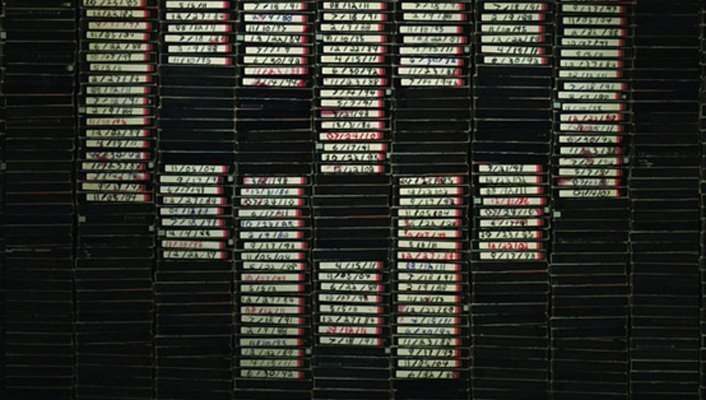 After wowing audiences during its midnight debut at the 2012 Sundance Film Festival, V/H/S is coming to smaller screens this week with a Blu-Ray release, allowing horror fans that missed out on its limited theatrical run an opportunity to experience the thrills and chills in the comfort of their own living room.  It’s no secret that found-footage horror flicks are all the rage these days, but the creative minds behind V/H/S earn points for trying something a little different with the genre.

The story of three thugs breaking into a seemingly deserted house to steal a rare VHS tape is the framework around which the rest of the film is built, with the increasingly bizarre and terrifying footage on each tape directed by rising stars in the horror genre. Some of the segments are quite clever, such as The Sick Thing That Happened To Emily When She Was Younger, whose footage is culled entirely from a long-distance Skype chat between a young lady and her boyfriend. Other clips, such as Amateur Night or Tuesday the 17th, are poorly executed and offer little in the way of originality or effectiveness.

Video quality is about as good as can be expected from a low-budget indie shot entirely on video. Much of the footage is grainy, with more than its fair share of blurring and artifacting, but one could argue that this is part of the film’s charm. Audio is a mixed bag as well, with distortion and clipping during many of the louder sequences – but again, this could be considered intentional.

V/H/S is an interesting experiment with some genuine scares, and each director involved with the project deserves credit for operating on a shoestring budget. It’s a shame that the experience comes across as a bit uneven, as sharper editing and a bit more polish could’ve made this something truly special.