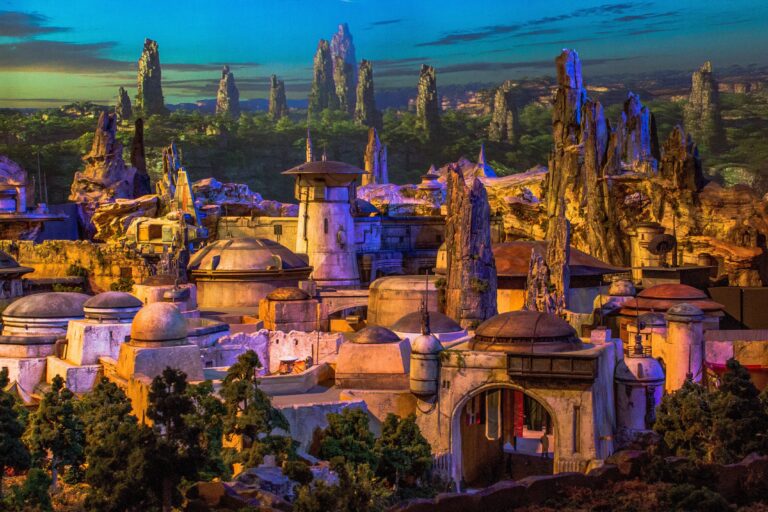 Last weekend, Disney fans from across the globe descended on Anaheim, California for the 2017 D23 Expo, and one of the biggest attractions was the promise of more news about the Star Wars-themed expansions to the Disney parks, currently under construction in California and Florida.

Fans may not be able to enter the galaxy far, far away until 2018, but D23 attendees got their first glimpse of what lies in store thanks to an enormous scale model of the new expansion, officially dubbed “Star Wars: Galaxy’s Edge.” The immersive creation is set in a remote trading post, where the conflict between the First Order and the Resistance continues to rage.

The west side of Galaxy’s Edge features lush forests, a collection of ships (including the X-Wing piloted by Poe Dameron in The Force Awakens), and the entrance to a secret Resistance base where one of the two cornerstone attractions will be located.

The east section of Galaxy’s Edge is a bustling trading post, where park visitors will no doubt find numerous shops and eateries (including a cantina location where original Star Tours pilot RX-24 serves as the resident DJ), as well as the Millennium Falcon itself – featuring an interactive ride simulator were guests will be tasked with piloting the fastest ship in the galaxy.

An interesting component of Galaxy’s Edge is the ability to “earn a reputation” that will follow you across the various activities and events. For example, flight crews that perform poorly and damage the Millennium Falcon may find themselves being pursued by a bounty hunter elsewhere in the park – details on these experiences are still vague, but it sounds like Disney is aiming for a whole new level of immersion.

Star Wars: Galaxy’s Edge is slated to open first at the Disneyland Resort in Anaheim, California, with an opening at the Walt Disney World Resort in Orlando, Florida, following shortly after. Both attractions are scheduled to open sometime in 2018.