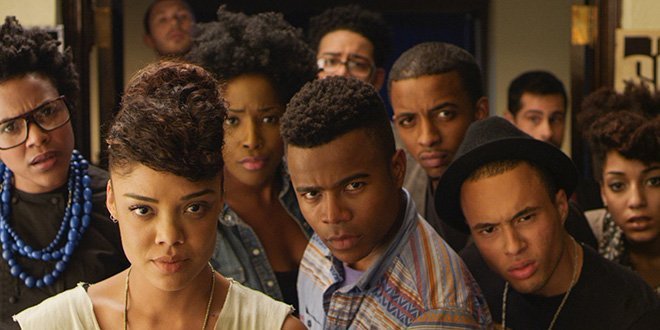 After a well-received debut at the Sundance Film Festival, Justin Simien’s sharp-witted satire Dear White People is opening in limited release this week. The film follows a group of black students at a fictional Ivy League school, where controversy breaks out when a group of white students host an “African-American themed” party, complete with wearing blackface and using watermelons as props for the event.

The film has been critically lauded for its focus on black identity and culture in today’s society, as well as for the performances by the ensemble cast. We recently had the chance to chat with star Marque Richardson (True Blood, Brooklyn Nine-Nine) about his role in Dear White People, the positive reception at Sundance, and working on a film with his roommate.

Based on the buzz coming out of the festival circuit, Dear White People seems to be drawing comparisons to Do the Right Thing.

Yeah, there are a lot of comparisons to that. And actually my character in this film is kind of like a mix between Buggin’ Out from Do the Right Thing, and Malcolm X, like a modern day Malcolm X. I’ve actually spoken to a couple of people who were involved in the production of that film, and they got a chance to see Dear White People, and they said it reminded them of their time producing Do the Right Thing – just the guerilla style of it, and the feeling that it’s more of a movement, as opposed to something that you’re just gonna watch and then go home and carry on with your life. It’s more of a conversation starter.

We’ve seen African-American-produced satire films before, most notably from the Wayans brothers, but this film seems like it has a much more intelligent approach to the satire, and that it’s actually trying to communicate something.

Yes, it is a satire, and yes, it’s very funny, but it’s also very smart. What I’ve seen, from the different screenings that I’ve attended, is that it has a mirror effect. It really makes you look at yourself. And it’s not just a film for blacks – all the audiences have been very diverse. We get tons of different groups that come up and say they relate to the story and they identify with this character or that one, so that’s been cool to see.

What was interesting for me was that I didn’t realize this movie was a comedy. When we were shooting it, nothing about it was funny to me. There were funny moments, but I was just in this zone of “fight the power” and listening to a lot of Malcolm X and Public Enemy, doing stuff like that for my character development. So nothing about that was funny to me, and then we go to the theater at Sundance and the crowd is laughing, and I’m like “what is everyone laughing about? What’s so funny?”

You also got to work alongside your roommate in this film.

Yeah, Brandon Bell, that’s my roommate. We actually went to college together, we went to USC and lived on an all-black floor, so we kind of lived this story. And for whatever reason, that didn’t hit me until Sundance when I was sitting next to Justin, the director, and we were about to do an interview for Democracy Now. I had an “a-ha!” moment and said “oh shit! We lived this!” I had no idea, but we had actually lived what Justin put onscreen.

So that’s cool, to be able to work with your friends and be proud of your work. And we’ve been friends for so long, he’s like my brother – there’s no beef, and we help each other with auditions and whatnot. Even if we’re going out for the same parts, we help each other. We understand that what’s for him is for him, and what’s for me is for me.

The film is coming out at an interesting time, because it feels like race relations have become a little more strained over the past few months, particularly with the incidents in Ferguson, Missouri. Are you worried about how the film might be received, being release in that climate?

You know, I’m not worried, because I’ve seen it so many times, and all people need to do it just go see it. It’s a conversation piece, that’s all it is. I’m not worried that any conflict or any heightened racial tensions will come from it, I’m more excited, in the sense that it’s a tool for conversation, for open dialogue. I’m excited about it.

You’ve dabbled in television quite a bit, but Dear White People is one of your first major film roles. Are you looking forward to doing more films, or would you rather keep working in television?

I absolutely love film, especially on the indie circuit, because it’s more freedom – at least in my mind. The hierarchy is sort of film, then the cable networks, and then regular TV, in terms of freedom and flexibility. So I love the freedom of film, and I love the money of TV. [laughs] I just wanna work. I just love to do good work, and stuff that I’m proud of. Fortunately, I’ve been able to do some really cool stuff. But I will say that Dear White People is one of the proudest things I’ve ever been able to be a part of.