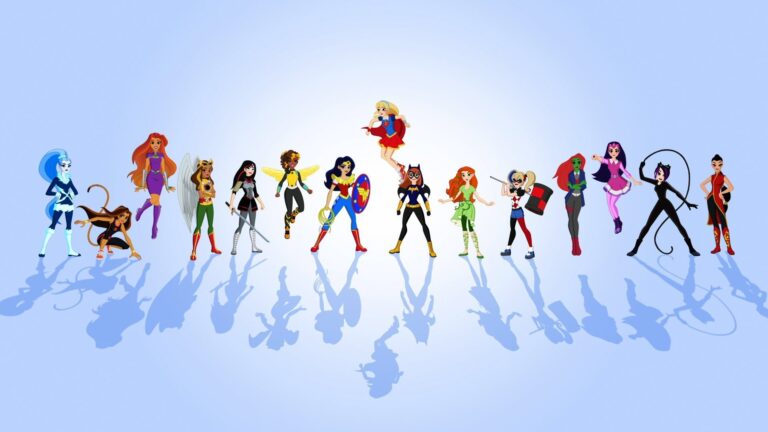 The story mostly focuses on the friendship between Wonder Woman (Grey Griffin), Supergirl (Anais Fairweather), Batgirl/Barbara Gordon (Mae Whitman) and Bumblebee (Teala Dunn) as they deal with the upcoming Hero of the Year announcement, which brings with it pressure and family expectations, all while trying to unravel the mystery of the shadowy threat facing the school.

The movie is targeted to young girls age 6-12, so the story is full of lessons about friendship, girl power and the occasionally silly joke – usually perpetrated by Harley Quinn (Tara Strong). Adults with a hardcore DC fan knowledge will probably get some enjoyment out of the deep DC catalog of characters used, such as Crazy Quilt (Tom Kenny), but this is not meant to be a story that connects to all ages.

But in case the DC Super Hero Girls aren’t your little one’s favorites, other DC favorites like The Flash and Green Lantern also attend the school and make appearances. Even the Teen Titans‘ Beast Boy (Greg Cipes), Cyborg (Khary Peyton) and Starfire (Hynden Walch) have significant enough roles and are voiced by their fan favorite original voice actors.

DC Super Hero Girls: Hero of the Year is the second film in the franchise, released along with the ongoing multiple webisodes available for free online through the DC Super Hero Girls YouTube page. Your little DC nerds don’t necessarily need to be familiar with the webisodes or the first film, DC Super Hero Girls: Super Hero High, but it does help establish all the characters. This film doesn’t spend any time re-introducing the teaching staff of the school or its students, and just jumps right into the world.

The DVD does feature a handful of the webisodes that give a bit broader view of the characters in this world, but not nearly enough to be able to know every character in the film – including choices like Professor Grodd at the school, who normally is a villain, but not here. Other than the handful of webisodes, DC Super Hero Girls: Hero of the Year sadly doesn’t have any other features to explore after viewing the movie.

DC Super Hero Girls: Hero of the Year has a very specific group of fans that it wants to reach, but it does a great job for that demographic providing bright, colorful, hero girl role models that can kick butt. The cute characters designs, catchy theme song and diverse cast should continue to plant the generation for the next, much larger, generation of DC Comics fans.

Wanna support The Nerd Repository? Click the linked image below and buy DC Super Hero Girls: Hero of the Year through our Amazon Store!

A cute movie for its target demographic of about 6-12 year old, that provides young girls solid role models and basic lessons of friendship, while providing a vast array of DC Comics Super Hero Girls to love and emulate - but will do little for most nerds outside that specific target age range.