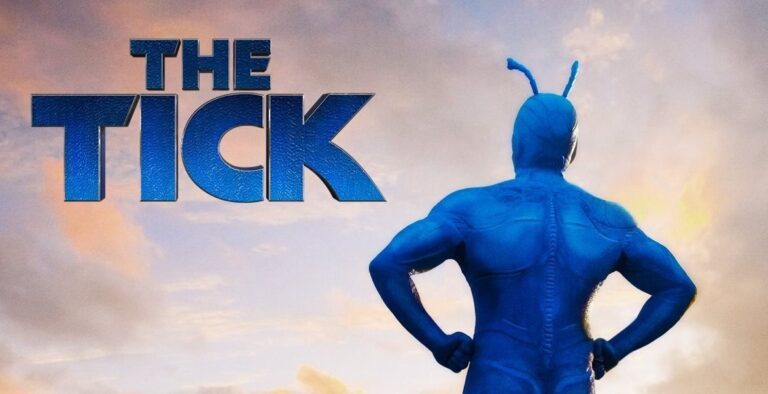 Get ready to become a fan of The Tick in a different kind of way with Amazon’s new pilot for the potential superhero series. The half-hour first episode is free to stream and up against two other shows battling to get Prime subscriber votes to get picked up for full series orders.

The Tick stars Peter Serafinowicz as the titular big blue, lovable, nigh invulnerable superhero, but this is a very different version of his story when compared to the 90s live-action series with Patrick Warburton, or even the cartoon series and graphic novels from creator Ben Edlund.

I know “dark” and “reboot” are sacrilegious words in the fanboy lexicon, but The Tick is one of those instances where it mostly works in favor of the property. This world has had superheroes since The Tunguska incident that brought Superian (Brendan Hines) to the world, but since has become populated with colorful heroes and villains inhabiting a very non-goofball comic book world – a world where people die and the villains are nasty, nasty people.

That comes into play heavily for the perfectly cast Griffin Newman (Vinyl) as the future flying sidekick of The Tick: Arthur. Newman’s Arthur keeps the spirit of the original character, but this version is a broken man searching for meaning after a childhood superhero-related trauma. I don’t want to spoil too much, but this re-imagining of Arthur has some really interesting potential twists to The Tick mythos that the episode teases to explore if the series does indeed get picked up.

Peter Serafinowicz (Guardians of the Galaxy) is also wonderful casting as The Tick himself. The British actor initially being an odd choice, nails the voice, mannerism and overall childlike awe of the character. Ben Edlund (Supernatural) wrote the episode and it shows most notably when The Tick speaks, because it feels like The Tick we all know and love. There’s even quite a few callbacks to conversations Arthur and The Tick had when they first met in the previous incarnations of the franchise.

If only The Tick’s suit didn’t look absolutely terrible. The textures and muscle lines on the blue suit along with the cheap looking material and odd bump on the top of his head (most likely for the robotics controlling the antennae) are just awful. If Serafinowicz wasn’t so good in the role, the character would be nearly unwatchable.

On the other side of things, Jackie Earle Haley (Preacher) makes the most of his one scene by doing some fantastic, villainous scenery-chewing and has a truly badass and scary design look as The Terror. The character’s presence is felt all throughout the pilot, so when you finally see him, you feel like you’re watching a truly evil, yet still comic book-y enough baddie.

The biggest thing the pilot struggles with is finding the right tone. The episode is directed by the cinematographer of The Dark Knight, Wally Pfister, and the world sometimes feels too real. This show shouldn’t be the 90s The Tick (which had a way better Tick suit), but it needs to pull back a tad at times on the realistic shots and tones of certain scenes – it shouldn’t be The Dark Knight either.

While I haven’t seen the other shows vying for a pickup from Amazon, I would gladly throw a vote in The Tick‘s direction. If fans don’t go in expecting a more faithful adaptation with zany comedy and eccentric characters, they should find themselves invested in this new version. The episode frustratingly ends on a cliffhanger, but the world the show has re-imagined has enormous potential and contains an extremely solid cast while most importantly leaving me wanting more.

The strange choice to bring The Tick into a darker more realistic world actually pays off with an interesting re-imagining of the big, blue supehero that is brought to life by a spot on performance by Peter Serafinowicz in the title role.