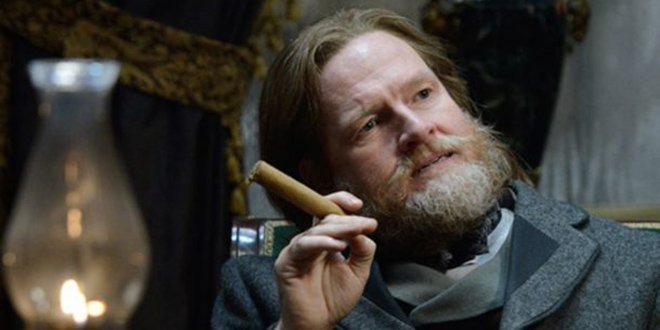 Last fall, we had the pleasure of chatting with television veteran Donal Logue about his guest role in Sons of Anarchy, where he played a devious former US marshal on a quest for revenge. While his time on the show may have been limited, the actor is keeping himself busy: he recently wrapped production on the second season of History’s Vikings, he’s currently shooting a role on Law and Order: SVU, and just last week he was cast as Detective Harvey Bullock in Gotham, Fox’s upcoming police drama set in the Batman universe.

Logue joins a cast that includes Southland star Ben McKenzie as a younger version of Jim Gordon, the Gotham City detective that would go on to form an alliance with the Dark Knight himself. Logue’s character is a seasoned veteran who becomes something of a mentor to the rookie cop, but whose methods may not sit well with his new protegé.

Despite a packed schedule, Logue graciously set aside a few minutes to catch up with the Nerd Rep staff. In the first part of our exclusive interview, he talks about the long road to joining the Gotham cast, and what viewers can look forward to when the show debuts later this year.

Brent: There was a rumor going around that you had been offered the role of Jim Gordon, but you quickly debunked that on Twitter. It seemed almost like the next day we started hearing that you may have been offered the role of Harvey Bullock, and Kyle and I both agreed on our podcast that we’d love to see that happen. Sure enough, we got the official confirmation, so we’re pretty excited to see what you can do with that role.

Donal Logue: I’m really happy. It’s great, and Ben McKenzie is fantastic. It’s funny because I don’t know how that went down. The truth is that I had met them a long time ago to talk to them about the project. All we had was a conversation, and it was funny when these rumors came out because they were unfounded in that Gordon was always supposed to younger and Bullock was older, so it was never a possibility for Gordon. Bullock was a possibility, but it was part of this vague conversation, and there never was an offer or something like that.

It also puts them in a tricky spot because on something this big, with Warner Bros. and DC and everything, there are a lot of different people that weigh in on who’s going to be in it. When I finally did get an offer, which was very recently, they were very apologetic because they felt in a weird way that it was dragging through a weird rumor mill that was slightly awkward, you know? I knew that they were interested, I just knew that there were other people in the mix too, and until certain things were taken care of they couldn’t make decisions.

So it was slightly humorous at the end when I got it and people were like “I told you so!” and it’s like “dude, you don’t even know how much of a possibility, how not a fait accompli this was.” I was one of a number of people, it very easily could have been someone else. It’s funny to be part of a project that is under such scrutiny because it appeals to a group of people who are very active and a fanbase that’s incredibly vocal, and really emotionally involved. It was kind of neat to go through it because I really hadn’t before.

Brent: The character of Harvey Bullock has gone through several iterations in the comics and the animated series. Can you tell us what we can expect from this version?

Donal Logue: It’s dangerous, because my kids watched the animated series and I remember listening to it over the speaker on road trips up to Oregon, I would hear it. It’s that tricky thing where I’m not that guy, I don’t look visually like the guy even in the cartoon. Then there’s that weird thing where I don’t want to take someone’s choice from the cartoon and match it. I want to create a character, no different from Lee Toric in Sons of Anarchy or King Horik [from History’s Vikings] or Hank Dolworth in Terriers. They’re all uniquely different scenarios and I don’t want to feel forced to do an impersonation of something else, which is a difficult thing to keep up over the course of a longer series. So we’ll have those talks.

What I do love about Gotham, that I can say so far, is that it creates this incredible world that, for me, you can step into things that almost feel like the roaring 20s, and then there’s this other really kind of heavy Blade Runner vibe floating around. It has this anachronistic element to it where it feels like it’s either New York in the 70s, or it kind of exists independently of time and space in a way, and you can dip into all of these different genres. So I’m excited by it.

There are elements of it that are completely contemporary and there are pieces of it that are very old-fashioned. I’m excited to see which way they go with the production design and wardrobe and all that kind of stuff. My main concern to start with, I was just going over this relationship between him and Gordon, just to find out how that dynamic plays out. Just to do my homework, basically.

It’s interesting that there’s something that exists that you can watch, but Ben obviously is not going to be tied to the cartoon and who Gordon is in that. I’m going to have to take a little bit of license and bring Bullock more towards me, and not me more towards the dude in the cartoon.

Kyle: So is the timeframe of Gotham ambiguous then? Gordon isn’t whipping out his cellphone and texting people and stuff like that?

Donal Logue: You know what, that’s hard for me to really get into, I don’t want to say. But there were a couple of examples of modern technology, but maybe an antiquated version of it, that gave me a little bit of sense that it’s certainly not the 50s and the 60s. No one’s making a joke about how “there’s no way you can press a telephone button and have a piece of paper show up in another machine.” There is an acceptance of a certain technological reality. But its not high tech and it’s not futuristic, by any means.

Brent: The official character description that was released describes Bullock as someone who plays a bit fast and loose with the rules. Do you foresee that creating some conflict with Gordon, who’s supposed to be the idealistic rookie?

Donal Logue: Not only do I foresee it, I guarantee that is the complete and utter core of the conflict. One guy’s been around Chinatown for a long time, and knows how it has to work. Someone who’s come in from a more idealistic world – not to say non-violent, he’s coming back from the war – steps into it, and absolutely there’s a huge moral quandary.

I had a friend who’s a combat vet of Iraq and Afghanistan, and he was telling me the other day about one of his partners who, after retiring from active military life became a police officer in New Orleans, and how much it threw him. And it’s not that violence throws the person, it’s just the nature of it and who’s doing it.

It’s a lot like Gotham, where there’s kind of an ambiguous line between good and bad. We have to let certain bad guys do certain things, in order for the greater good, for this machine to keep working. And then someone comes in who’s like “no, I have a much more black and white view, I’m not into this notion of moral relativism. There’s right and there’s wrong.”

And what is law? Is law this platonic form of truth that floats in space that is fixed, or is it something that’s this arbitrary thing where it’s like “the law is me and you, right now, in this car. Whatever we determine, that’s the law.” And that’s the kind of thing that will be a conflict in this show.

Kyle: Can we expect Bullock to be a recurring character, or are you just showing up at the beginning?

Donal Logue: Contractually, I’m obligated to be there. I’m gonna be around, for sure. But the story falls squarely on Jim Gordon’s shoulders, and this awesome world where we get to meet the super infamous villains of Gotham City for the first time, when they’re young. For me, that’s the really interesting part: “oh, so that’s where you come from, Riddler.”

Kyle: Is that the sort of thing we can look forward to in the pilot, just little sprinklings of the Gotham universe?

Donal Logue: Absolutely. I don’t know if I’m not supposed to say it, but yeah. I think it’ll be fun. There will definitely be Gotham villains that you’ve come to know and love being shown in a light that… maybe it’s the first time that light’s been shone on them.

Gotham begins shooting next month, and is expected to premiere sometime in the fall. Check back later this week for the second part of our interview with Donal Logue, where we delve deep into the second season of Vikings and what to expect from King Horik in the season premiere, and beyond.