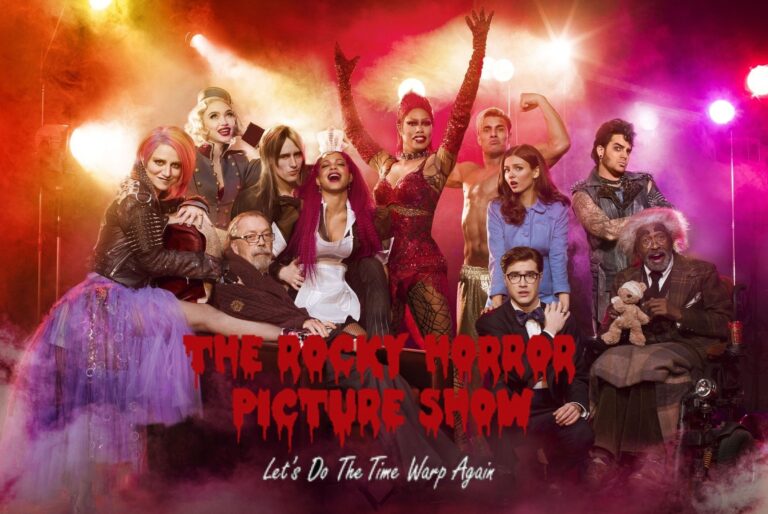 Where does one begin trying to talk about the original version of The Rocky Horror Picture Show? There’s really no easy way to describe the phenomenon to someone who hasn’t seen it. There’s really no middle ground – you either love it or you hate it – but there is one thing that stands true: seeing The Rocky Horror Picture Show during a midnight showing with the live cast and audience participation is an experience like none other.

The original Rocky Horror Picture Show is not the greatest musical by any means, but it gained its notoriety by watching cast members act out the scenes while the movie is being played, throwing popcorn when the actors in the movie do, and yelling back at the screen with hilarious quips and mostly perverted comments during certain points in the movie. That is what makes The Rocky Horror Picture Show so magical.

I remember watching it when I was a child and thinking to myself, “This movie is dumb.”  However, the first time I went with some friends to see it in the theaters, I fell in love. Every Saturday night for almost four years, I was in that theater, throwing toilet paper, and yelling at the movie screen. Anyone who has been to a live showing, will tell you this is the only way to truly enjoy The Rocky Horror Picture Show.

The Rocky Horror Picture Show: Let’s Do the Time Warp Again is an attempt to bring a new generation of fans into the twisted world of a sweet transvestite, from transsexual Transylvania. The remake has a decent amount of talent behind the project: Laverne Cox (Orange is the New Black) takes the lead role of Dr Frank-N-Furter, an iconic role originally portrayed by Tim Curry. Victoria Justice (Victorious), Ryan McCartan (Heathers: The Musical) and Adam Lambert all join Laverne in this almost scene-for-scene remake of the original.

The Rocky Horror Picture Show: Let’s Do the Time Warp Again has to be looked at from two different perspectives, one being what it is: a musical made for a new generation, with catchy songs, a paper-thin plot line and a cast of virtual nobodies. The other way is for everyone who grew up on the original.

I am one of those who grew up on the original and The Rocky Horror Picture Show: Let’s Do the Time Warp Again feels like nothing more than a cheap Dollar Store knock-off. From the slaps on the side of a machine, to the way the background dancers dodge Eddie on his motorcycle, but only with a less talented cast, and butchered versions of the songs we’ve all grown to love.

The most well-known song from the original is The Time Warp, and the remake version just didn’t seem to have as much energy and pizzazz as its predecessor. After listening to that version, I wish I could do the time warp again, and go back to when I started watching this travesty and stop myself by any means necessary.

The only redeeming qualities of this bargain-bin remake was that they set the movie up as if it was shown in a movie theater, and at times the camera would show the crowd interacting with the movie. Popcorn throwing, tossing rolls of toilet paper at the screen during Dr. Scott’s scenes, yelling back at the screen: essentially paying homage to what made the original film so popular, and seeing Tim Curry portray the narrator of the film was a wonderful touch. Outside of that, The Rocky Horror Picture Show: Let’s Do the Time Warp Again is an utter disaster.

This new production of the original 1975 cult classic falls short in every way possible. A production so bad, that it somehow makes the original look like a masterpiece, and that says a lot considering the original is the best of the worst when it comes to musicals.