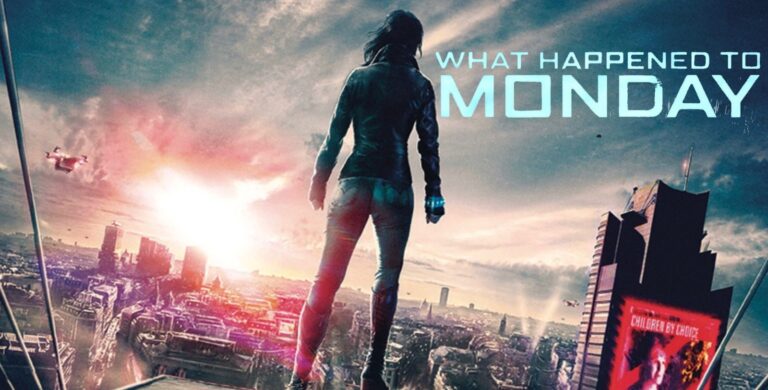 Wirkola carved out some time to talk to us about the challenges of directing acting scenes with seven characters and only one actress, the film’s unique release platform, and working with legends like Willem Dafoe and Glenn Close. You can check out the highlights below:

The action sequences in the film are very visceral and a definite highlight. What was it like plotting out those beats especially with Noomi [Rapace] playing multiple characters?

Tommy Wirkola: Thank you, that’s very nice to hear. We did have a lot of fun with those action beats. I always knew I wanted the violence when it happened to explode, to feel real, unforgiving, brutal and of course there’s a little bit of humor here and there – it’s in my DNA to put a little bit of that in there as well.

I just want it to feel surprisingly violent when it happened and of course the sisters, to finally see them in action, especially in that first fight, was a lot of fun to choreograph and to see each sister fights in different ways and how they look after each other and protect each other. We always talked about that, they should be fighting like a herd of cats. They’re not trained, not very sophisticated in their fighting and they go at it with their strengths. The fact that Noomi plays them all, was a challenge. But it was a fun challenge to come up with and make it seamless and all flow together.

The sequences with Noomi interacting with all the sisters look incredibly real and organic. Did you employ body doubles or split-screens? What techniques did you use?

Tommy Wirkola: Well actually, we used the techniques you mentioned and more. The goal was to try to combine all the techniques from way back and before to the most modern stuff today. We had doubles when we could, we had split-screen and mounted the cameras in several takes, we had motion control, face-replacements in some things and by the end we hoped by combining these things it would feel seamless.

We had a rule that we set ourselves before going in that we were never going to shine a light on the technique of it – the fact that Noomi is playing seven characters to show it off, that she’s doing all these characters. It was important to me that people forget about it as quickly as possible. The rule was to shoot every scene as you would shoot a normal scene, with seven actors doing the parts. I wanted it to be a fantasy where you didn’t have to imagine we used all the techniques in the book and tried to combine them all together.

This film is getting a rather unorthodox release in the US bypassing theaters and debuting on Netflix. What are your ideas on this type of release platform?

Tommy Wirkola: The film had an interesting way of how it was made, because we financed it through Europe and pre-sales in Europe and European territories and European distributors and investors. Shooting it we hadn’t sold it the US yet, or the UK. So we shot it, cut it and showed it in Toronto last year, and in Toronto Netflix saw it and loved it, and bought it for US, UK and Latin America. Which means in European and many countries in the world it gets a cinematic release and in the UK, Latin America and the US it’s Netflix.

I feel like I’m getting the best of both worlds. Of course, going into this I felt that it would be a movie for the cinemas first, but Netflix – when they saw it in Toronto – came in strong and they wanted it and believed in it. Netflix has an insane reach, and the amount of people who are going to see it is mind-blowing, of course for any director. That is the ultimate goal, as many people as possible will see the film, and through Netflix that will happen.

I just think they’re a very cool place to do business with, they believe in young filmmakers and different things, and so hopefully yeah, the fact that so many will see the film and Netflix is believing in it and pushing it as hard as they are – I am really happy about that. And I can always go to France to see it in a crowd if I want to.

The world in the film feels like a scarily believable future. Do you feel this film’s subject matter could become a reality in the near future and did that draw you to the project?

Tommy Wirkola: For sure. It was something in the script that existed before I came onboard and had gone through a few versions before me. That was one of the most appealing things when I read it, that these versions felt like soon, this could be soon. Especially just the world itself and where we’re at, with inflation and genetically modified food and poverty and wars. That feels like it’s happening now in many places.

It was important for us to portray that the feeling that this is very near future. We’re selling it all in those first five, six, seven minutes with the montage that we made that is bringing you into the world and using a lot of real footage from around the world. So like you said, it’s about making it feel real and if we don’t do anything, it might be where we end up.

What do you feel about coming back for a possible sequel? Are you interested in revisiting this world or are you happy with the mostly self-contained story presented in the film?

You have two of Hollywood’s best veteran actors currently working with Willem Dafoe and Glenn Close. Can you tell me what it was like working with these icons?

Tommy Wirkola: Like you what said, they are both legends, and when you meet them and you work with them you realize why they have been in the business for so long. They are extremely talented, but they’re super professional, they’re smart, they’re intelligent and they bring a lot to it.

Glenn was actually very knowledgeable about the subject and very into global warming and world population and she knows about all the things. She’s read tons and tons books about all this. So she came in and she already knew all about it and put a lot into her character.

Unfortunately in the end we shot a lot more scenes with Glenn and lot of them ended up on the cutting room floor. It was some of the hardest stuff I cut from any film, because it was so good, but it was cutting down and keeping the focus on Noomi. But she had so many ideas and knowledge she brought in because this something she burns for, truly. Personally I just had a blast working with her, in addition to all things I mentioned, she’s just really funny as well and I would love to work with her again.

Willem, I’ve been a huge fan of his since, I think Platoon was the first film I saw him in, but his work is so diverse and I still have Bobby Peru showing up in my dreams from time to time from Wild at Heart. He’s just one of those actors that has that something extra. Again, seeing him work and seeing how professional and how great he was with Clara, the little girl he shares the scenes with and he helps make the scenes so special. Those scenes are very important to anchor the film when it comes to the emotional connection to the characters. I can’t say anything else that won’t sound like a cliché, but I would love to work with both of them again.

You said this is the hardest film that you leave stuff behind on the cutting room floor. Would you let us know what some of those scenes were?

Tommy Wirkola: Yeah, there were two moments that were really tough for me to cut. One of those was a Glenn scene and Robert Wagner was in the film and he was only in this one scene. He plays a reporter that interviews Caylan (Glenn Close), like a 60 Minutes type of reporter and through that interview there’s this big scene where she talks about her childhood and talks a little bit about her motivations and where she came from. That was one of the last scenes that we cut and something I really loved and was a tough one.

The other one was with Willem where Noomi plays a teenager version of the sisters, and she’s being told by Willem – she had a teenage crush at that age and being told by Willem that you can’t have boyfriends in this life – it’s impossible. Love is impossible. I’d say those two scenes were the hardest and the last two taken out. Maybe one day we can release them online or somehow. I don’t know how you do that without Blu-ray and DVDs but for sure great scenes.

I’m sure Netflix will have a way to add special features very soon. Thanks for your time Tommy and good luck with the release!

What Happened to Monday? releases in the US on Friday, August 18, exclusively on Netflix.