Interview: Scott Z. Burns and Daniel J. Jones on whistle-blowing vs truth-telling in ‘The Report’ 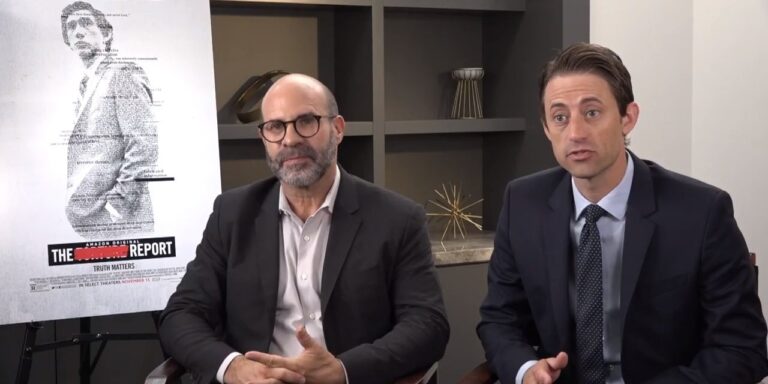 Scott Z. Burns is no stranger to crafting riveting, edge-of-your-seat cinematic fare — his writing credits include The Bourne Ultimatum, The Informant, Contagion and Side Effects — but The Report marks his feature-length debut, working from his own screenplay about the Senate’s investigation into “enhanced interrogation tactics” employed by the CIA in the wake of 9/11.

The plot centers on lead investigator Daniel J. Jones, portrayed by Adam Driver in the film, as he spends five years poring over documents to uncover a web of lies and deceit, only to find himself facing layer upon layer of bureaucratic red tape when he tries to take his findings public. The Report is a gripping drama and a devastating indictment of political maneuvering and closed-door dealmaking that far too often takes precedence over the truth.

Prior to the theatrical release of The Report, we sat down with Burns and Jones to discuss the events depicted in the film and the journey to bring those events to the big screen.

Scott, I want to start with you: a seven-year investigation and almost 7000 pages of material. How do you take that and condense it down to a two-hour film and decide what stays in and what falls by the wayside?

Scott Z. Burns: You write a lot of drafts, and you ask your friends to read them out loud. This was a movie that I always knew was going to involve a certain amount of people sitting in rooms and speaking to each other, but I needed it to function as a political thriller. So it was just listening to it, over and over again, and making sure that it made sense, but also keeping the momentum going so it works as a thriller.

Dan, how involved were you in the production process? Obviously, you’re sitting here, so I’m assuming the answer is “quite a bit,” but I’d love to get your perspective on how you worked with Scott to tell this story to a larger audience.

Daniel J. Jones: Sure. When the executive summary was released in December of 2014, my job was to talk to academics and talk to journalists, talk to people in the creative community about the declassified report. Scott was one of the people who called, and he kept calling and calling and asked really detailed questions. We established a friendship, and I knew he was doing a script on this, [so I] helped him on the factual basis of the actual details in the report as much as I could.

One thing I noticed in the film, that feels kind of prescient, is that the name “Edward Snowden” gets thrown around a lot. The film is coming out at a time when he’s just released a book and he’s doing all this press. I would love to get opinions on how you feel about Edward Snowden and the things he did.

Scott Z. Burns: I’ll take that first, seeing how I wrote those scenes, so I take responsibility for that. We have to sort of build a whole new taxonomy of what a whistleblower is and what a truth-teller is. The reason I put those scenes in there is [because] what Dan did is very different. Dan’s job was to go and find out the truth about this program, so he was not doing anything other than what the United States Senate asked him to do. So I wanted the audience to understand that there is system in place: it’s called oversight and accountability, and it’s what the United States Congress is supposed to do the Executive branch.

Daniel J. Jones: I would say whistleblowers are extremely important in our society, but there is a path you can follow — a legal path, which is what we’re seeing today in Congress. There were whistleblowers at the CIA that reported wrongdoing under this program, throughout its existence from 2001 to 2009, and we relied on those whistleblowers to create the report.

One of the other things I really appreciated was, I think it’s very easy — particularly looking at a film like Vice — it’s very easy to paint people in the Bush administration as villains, but this film doesn’t let anyone off the hook. There’s culpability on both sides of the aisle, and you can argue there’s even culpability among Senator Feinstein and her staff.

Scott Z. Burns: Yeah, look, to me this story isn’t about right and left — and Senator McCain said as much — it’s about right and wrong, and it’s not about the people who we tortured, it’s about what that program says about us. And I think that’s true to this whole movie. We’ve been given this amazing system, and yet it seems to be under siege right now. For me, what was so striking when I started writing this, was that someone like Dan did his job so rigorously, with such clarity of purpose, that I think it made — and the Senators I interviewed would say as much — it made them do their job. So we need to make sure that our system is peopled with folks that are going to do their job with integrity.

So with that in mind, and looking at the climate in which this film is coming out, where we’re seeing a very similar situation playing out in Congress right now — we have people refusing to comply with subpoenas and refusing to provide information — it’s almost like you couldn’t ask for a better time for this film to be released and remind people how this process is supposed to function.

Scott Z. Burns: Yeah, I mean, I care more about my country than I do my movie, so I’m not happy about what’s going on right now. But I do think that history isn’t a discrete set of events: it’s a series of events, and they influence each other, and I think if you look back at the story we’re telling you can see the seeds of the moment we’re living through right now.

For more on The Report, click here to read our review.