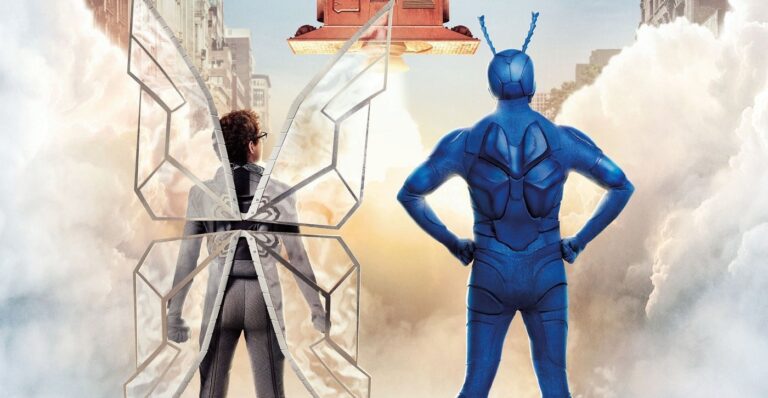 Destiny’s powerful hand is once again at the backs of The Tick and Arthur as Amazon’s Studios infectious reboot of the beloved characters returns this week for the final six episodes of The TIck‘s first season. The series is anchored by note-perfect portrayals of the lovable lead duo by Peter Serafinowicz and Griffin Newman as Tick and Arthur respectively and the talented actors took time to speak with us directly at The Nerd Repository to give our readers the scoop on the upcoming climax of the first season.

Tell us about what it felt like to portray the arc of Arthur from the damaged, constantly nervous individual he was to the more confident hero he becomes by the end of Season 1:

Griffin: It just sort of a natural evolution. I felt like over the course of this season it was stacking up the Jenga Tower to the point by the end of the first season Arthur is pretty fully-formed as the character we know from the past iterations. Over the course of the 12 episodes we had to incrementally build all of that up to being the hero who is confident enough to be a superhero while still being terrified enough to still be Arthur. It felt satisfying to finally get to play all the different shades of the character.

What part of filming the show was your favorite part of the day? The stunts? The comedic scenes?

Peter: I would say putting on the suit was the exciting part.

Griffin: Yeah I’d say taking off the suit was probably my favorite part of every day. No, but the fun stuff was that I was a big fan of the cartoon and the Patrick Warburton show – I have at least one or two moments a day where I can’t believe that I am actually in a scene with The Tick. I’m not delusional, I’m very aware that I am acting with Peter who is a human being, but there are those moments where we are so deep in it and sort of playing those characters full tilt, it feels like a very expensive grown-up version of a child reenacting fights with their favorite superheroes on the playground.

Peter: I just wanted to add to that, I just realized something which is that… this was a quite difficult shoot, the costume was extremely uncomfortable and not easy at all and the schedule was – a month gone a lot of the time, but my favorite bits were working with Griffin, when I had scenes with Griffin. I looked forward to those scenes, even though most of my scenes were with him. A bit like The Tick, I was a bit lost when I wasn’t in a scene with [Griffin]. I much prefer doing scenes with Griffin. It was great.

Griffin: Also it’s a very technically complicated show. The stunts, the effects, and all these different setups, when we can find a real moment of that honest comedic connection in a scene like that – to do that in a show with all these other pieces flying around it was always kind of exciting, it was a thrill when we could identify one of those moments.

The final six episodes of the season see more hints and misdirects when it comes to learning The Tick’s origin. Do you want Tick’s origin revealed and what’s it like playing a character that is essentially a blank slate?

Peter: I think in this first [season] The Tick proports to be interested in his origin, it kind of bothers him seemingly, but I don’t think it bothers him actually that much. It certainly doesn’t keep him awake at night. I think that I have come to the conclusion it’s far easier for me to play The Tick without knowing his origin. It’s part of his whole Tick-ness.

Griffin: He always has been, he always will be. He came into this world fully formed.

Griffin: He’s forgotten how he was begotten.

Peter: Yeah! If somebody did beget him, then he wouldn’t be begotten would he?

Griffin: But I also love in the moment The Tick first appears in the Pilot, it seems like this guy might have been around for centuries or for five seconds. It doesn’t make sense that he was created, because it doesn’t feel like there could have been a time where he wasn’t around. It’s a paradox.

Fans will also get some really great scenes with Midnight the talking dog in the last six episodes. Did you guys film with an actual dog on set?

Peter: They didn’t say that in front of the dogs because…

Griffin: They didn’t want to make the stunt dogs feel bad. But I asked the dog trainer, “What do you mean the dog is better at dialogue?” He said the dog was better at looking at people so we can dub in dialogue later. [laughs] But a dialogue scene with a dog means that when you’re off camera, when it’s on the dog there’s very often someone holding meat on a stick over your shoulder to get the dog to look in your direction. It’s strange but it helped me, felt like it unlocked a whole new corridor of my acting process.

Peter: Yes, they refer to it as payment. Griffin insisted on the same system for him.

Griffin: The other weird thing is that they don’t want you to make eye contact with the dog, because then the dog could get aggressive. So when it’s on you, you have to look as close to the dog as possible so that it lines up on camera, but you can’t actually lock eyes with the dog. It’s a complicated process, but I will say there was one day where the dog had six pages of dialogue straight and the dog got it in like three takes. Every time in the Q&A scene someone came up to ask a question he looked at the right person and looked like he was reading the book and looking up, looked at the crowd. It was pretty incredible.

Peter: He put me to shame.

Griffin: It was one of the better acting displays that I’ve witnessed.

Dangerboat and Arthur develop a surprisingly awkward “relationship” in these new episodes. How were those scenes filmed and did the voice of Dangerboat, Alan Tudyk, ever run lines on set with you?

Griffin: No, he wasn’t on set. We didn’t know he was going to do the voice until pretty late into the season. We had our beloved, one of our first ADs – his name was Alex Finch – in the second half of the season he ended up often having to play two or three characters on set because of how many could not be played by human beings on camera. Between Dr. Karamazov, Dangerboat, Midnight – we called him Daniel Day Finch because he would have to circulate between two or three different characters within a given scene sometimes.

Peter: He would often have to do with The Tick as well, voice over in the beginning or end of a scene.

Griffin: Right, the speakerphone, the monologues…when we were shooting the beginnings of an episode where The Tick is doing a narration where we were the people on camera he would play The Tick while Peter played The Tick.

Peter: He has a very distinctive, raspy voice that doesn’t have a lot of tonal range.

Griffin: And we didn’t know what Dangerboat was going to sound like, he just tried to make it sound a little more sensitive. Especially when the scenes got amorous in scenes where the character is flirting with me even though he was a gruff, raspy-voiced guy to begin with: [in raspy voice] “Oh Arthur. You’re looking good today!”

We demand a second season. If the good people at Amazon allow it, where would you like to see the character’s adventures take them?

Peter: I’d actually love to just see them hang around the neighborhood more.

Griffin: Peter had a radical pitch for Season 2. It would take place all in Peter Serafinowicz’s living room. [both laugh] Season 2 is a lot of us both sitting around Peter’s living room watching TV.

Peter: I would seriously like to see us just going around being local superheroes. That’s what I would like.

Griffin: Yeah, your friendly neighborhood Tick and Arthur and how these guys fit into an ecosystem now that they’re not in secret anymore…but I also like any time they send characters to space in anything. It almost feels like a desperate…maybe that’s a Season 6 thing. Like Moonraker, screw it they’re going to space.

Maybe a Chairface Chippendale story could lead them there?

Griffin: Yeah, we have to sweep the writing on the moon off!