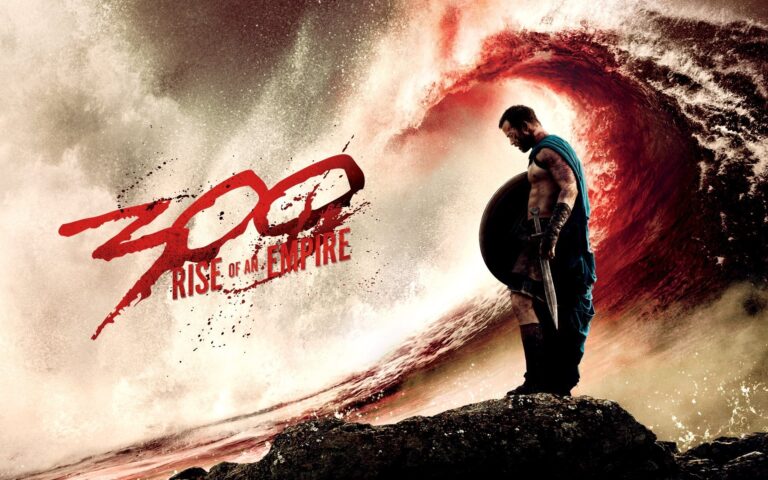 This. Is. NOT! Sparta. But 300: Rise of an Empire makes a valiant, albeit unnecessary, attempt to recapture the lightning in a bottle that was the original 300. Let’s be honest, nobody thought this film was going to be that great, or even hold a candle to the original – after all, this film is a prequel/sequel that sees only secondary characters returning to reprise their roles. It’s a setup that sounds akin to direct-to-video releases and at times this film drops down to those levels.

300: Rise of an Empire (based on Frank Miller’s graphic novel Xerxes) is an interesting storytelling vehicle because the script follows Themistokles the Athenian as he battles the Persians before, during, and after the events of the original 300. The overall framing of the film’s timeline is neat in theory, but in execution sloppily stumbles along the way to its resolution. It moves at lightning speed from action-piece to action-piece and clocks in at a mercifully slim 102 minutes – and it didn’t need to be a minute longer.

As Themistokles, Sullivan Stapleton is given the impossible chore of replacing Gerard Butler’s Leonidas and is tasked with trying to unite petty politicians squabbling in Greece against Xerxes and the Persian Army. 300: Rise of an Empire does a fairly nice job establishing that his soldiers are not the Spartans (most aren’t even warriors), adding a bit of extra uncertainty and tension when battle looms.

Themistokles is certainly an empathetic leader that audiences can root for and Stapleton has the right amount of likability in the role, but this film sorely needs a Leonidas. It also really showed how impressive the Spartans in 300 were when viewed from the outside by other areas of Greece, thereby actually pulling off something commendable with this effort by making characters in 300 better in hindsight.

But what audiences do get in replacement for a larger-than-life hero is an electric, irresistibly scenery-chewing villain with Eva Green’s delightfully insane Artemisia. Green drips with evil and sultry smoking hotness while metaphorically coiling around her prey like a snake, before she bites off their heads and enjoys every moment of it.

I’ve long enjoyed Green’s work since seeing her star-turning role in Casino Royale, but if 300: Rise of an Empire does nothing else, I hope it puts her into higher profile work, because she is a blast to watch.

The film lets Artemisia take center stage (which is a very good choice) but as a result pretty much ruins the enigmatic and flamboyant Xerxes (Rodrigo Santoro), whom audiences couldn’t take their eyes off in the original 300. Too much of his (silly) back story is given to the audience, destroying the mystery and making him just a loony pawn, and works to lessen the impact of the character’s confrontation with Leonidas in the original film.

But really, what the filmgoer is slapping their $10 down for is the elaborately bloody and highly stylized battle scenes, and 300: Rise of an Empire does deliver quite a bit of fun in that department. Rather than rehashing hacked limbs and neck wounds that spout like fire hoses while on solid land, much of the battles here take place with some fairly inventive naval warfare mixed with the expected sword-to-sword blood-spattered violence. It’s all laughably ridiculous, and director Noam Murro overuses a weak imitation of the slow-mo/speed-up shots and elaborate CG staging that became synonymous with Zack Snyder’s film (he produced, but did not direct this one).

300: Rise of an Empire is better than it should have been, but that doesn’t mean there was any reason for this film to have been made. Eva Green is the biggest selling point for the film, but everything else here feels just a bit less important or groundbreaking when compared to its predecessor. 300: Rise of an Empire delivers on the bloodlust, excess, and extravagant fight scenes, but can’t escape those moments that feel very cheap and slapped together strictly for 300 nostalgia.