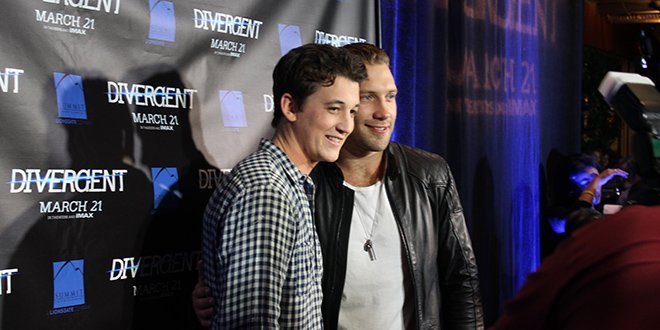 Divergent is set to explode onto movie screens later this month, and the cast of the film has embarked on a massive promotional tour, bringing red carpet events to major cities nationwide. We attended a screening of the film in Phoenix last night and chatted briefly with Miles Teller on the red carpet, and this morning we took part in a roundtable interview with Miles and co-star Jai Courtney. Here are some of the highlights, with video footage of the interview available at this link.

Your characters are kind of dicks, but you play them very well. Tell us what it was like being a villain.

Miles Teller: It was fun for me. I had just done That Awkward Moment, and before that Shailene and I had just finished The Spectacular Now… I wasn’t necessarily looking to play a villain, and I use that word lightly because I think Peter’s character kind of comes full circle. He’s pretty conflicted. But for me, it was just wanting to do something different, get off the light-hearted comedy stuff and beat somebody up.

Jai Courtney: It’s always fun to play a villain. I would’ve liked to have been even more villainous. Look, hero stuff is always great. I remember the first gig I got out of the states, I played a villain, and I remember being acutely aware at that point that I wanted to shake it up before a patent formed. But for this particular project, it was a good opportunity to go back and be a prick.

Between this and Jack Reacher, you’re a really scary guy.

Miles Teller: You could take him, man. It’s an illusion.

Tell me about the head space you get into for these really intimidating, aggressive roles.

Jai Courtney: It doesn’t require much of a transformation. You want to try and make your character as likeable as possible, even when you’re playing someone who’s not supposed to be. So that’s probably the challenge, remembering that you’re not supposed to be liked. I would try, just instinctively, to be a little more charming with the character, and [director Neil Burger] was always telling me to just make it dead, and flat.

But Eric’s interesting because his attitude might reflect the fact that he’s a dick, or whatever, but in the early part of the training, there’s a drive. He wants the initiates to be as fit and strong as they possibly can. He’s not there to be a dick, it’s just his way, his method, and I think that’s highlighted be the relationship with Four and their dynamic.

Miles, as you mentioned, you had worked with Shailene previously in The Spectacular Now. What was it like for you guys to reconnect and have a completely different dynamic this time around?

Miles Teller: It was pretty funny, when we first got up there we’d be doing this fight training, working on our fight stuff, and she’d be like “Aww, Sutter.” And it’s like “Stop. We’re not doing that shit now, I’m beating you up, little girl.” But yeah, it’s cool. I think anytime you’re more familiar with an actor, it allows you to just be more honest with them.

So Shailene and I would be doing a scene, and if a scene wasn’t working we could almost… not direct the other person, but it’s like we didn’t even need Neil so much to help us figure it out. We would just be like “alright, this isn’t really working.” Falling in love is hard, learning a fight scene is easy.

Jai Courtney: There was a fair amount, out and about. Obviously, everything within the compound of the Dauntless faction, that’s all in a studio. There’s wasn’t a lot of green screen.

Miles Teller: Yeah, I didn’t really act on a green screen. A lot of abandoned buildings.

Jai Courtney: They would kind of extend landscapes with a green screen, but the sets were pretty incredible.

Miles Teller: For a big budget movie, these were the shittiest sets I’ve ever been on. This is by far the biggest budget I’ve ever done, and I was expecting the red carpet, and it was pretty much all abandoned buildings in Chicago that would be leaking when it snowed. There would be rats around and Shailene would be like “I want an inspection.”

Jai Courtney: That’s true, actually. There were like, asbestos issues and all sorts of stuff.

Miles Teller: It is what you see, it’s pretty grimy. That warehouse was cool, though, the fight training and stuff. That was the first stuff we shot.

Did you actually go out onto the Navy Pier?

Miles Teller: Yeah, they shut the whole thing down. And then I climb [the ferris wheel] with Shae and I kiss her.

Jai Courtney: I love that moment.

The Spectacular Now was a very small budget, and then you came to this with a big budget. Can you talk about some of the differences between a small movie and a big movie, some things we might not know about?

Miles Teller: Acting-wise, obviously it’s the same thing. You don’t adjust your acting. But there’s a lot more angles – on Spectacular Now, you’re doing a lot of stuff in a one-shot, or a two-shot, and we get about three takes. On this, you’re really breaking it up – you’ll get like 20 takes at one line from six different angles.

So really, it’s the stop and start. You’re pacing it out. The trailer was better, a lot better. More time for my hair and makeup. And the scope of this was a lot bigger: at any given time, there’s like 10 of us in a scene, I don’t think I got any one-on-one scenes. There’s always people there, so I guess that was different for me. I’d be on set 12 hours to just wipe frame, or be in soft focus in the background fighting.

In some cases, a big budget film can kind of steamroll over actors. Do you feel like you were given [everything you needed]?

Miles Teller: I feel like my acting was taken advantage of. [laughs] Neil’s a good director, but one of the main draws of a movie like this, and the reason you put it on IMAX, is for the visual magnitude, the visual presentation of it. With that being said, yeah, maybe in a particular scene it’s more about the shot than it is what you’re doing, but Neil gave me everything I needed. If anything, you’ve just gotta have the stamina to do 20 takes, as opposed to an indie where you do like three or four.

Jai Courtney: We found that, too, there were so many adjustments for camera, rather than for performance, that you might find on a smaller film where the emphasis is the other way around.

If you’re both standing in front of the bowls [at the choosing ceremony], which bowl do you drop your blood in?

Miles Teller: I think I would be Divergent, because I think I’m special and different.

Miles Teller: Yeah, I guess I’d probably be the same.

Click here for Part Two of the interview with Miles Teller and Jai Courtney, where they talk about stunt training, fandom, and their upcoming roles in Fantastic Four and Terminator: Genesis.