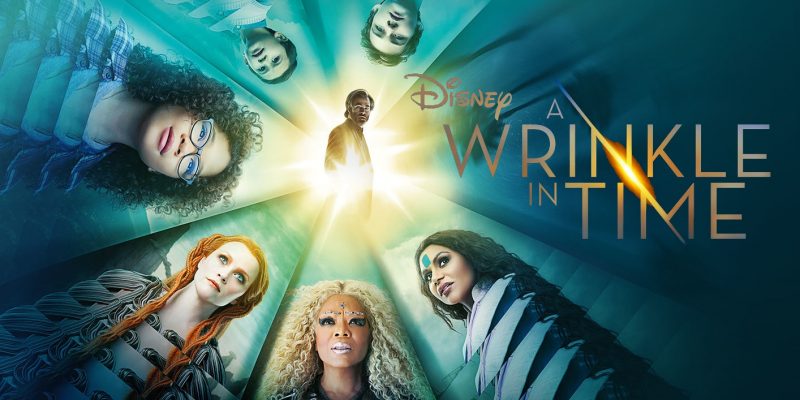 Keeping the magic of Disney’s live-action family adventure films has proved rather tricky to maintain for the Mouse House. For every Mary Poppins classic there’s a Race to Witch Mountain disappointment with the overall pedigree being nowhere near their animated or other departments. The latest attempt to capture the imagination of the pre-teen audience is the adaptation of classic novel A Wrinkle in Time, coming from Selma director Ava DuVernay.

The ambitious sci-fi epic tells the story of young Meg Murry (newcomer Storm Reid), still devastated by the disappearance of her astrophysicist father (Chris Pine) four years ago, as she embarks on an intergalactic journey to save her Dad with the help of her genius adopted brother Charles Wallace (Deric McCabe) and her new friend/crush Calvin (Levi Miller) thanks to the guidance of three mysterious astral beings.

This dazzlingly colorful film also boasts an extremely talented multi-ethnic cast in a script that wonderfully never addresses anyone’s race or ethnicity – they’re just kids, as it should be. The fact that I mention that this element is a refreshing one shows we still have far to go as a society, but A Wrinkle in Time is the kind of positive reinforcement that can ingratiate the ideals of blurred racial lines and equality to this still impressionable current younger generation.

But getting down to the actual nuts and bolts of the story and overall film, A Wrinkle in Time is a bold but messy mix of uneven storytelling and hit-and-miss visuals. Speaking of the visual element that most feel are one of the big selling points of the film, it’s clear DuVernay has growing talent in wrangling big budget special effects, but A Wrinkle in Time almost reads like two different films when it comes to successful execution of the ambitious visuals.

The first hour of the movie is brimming with bright colors and shaky effects including a giant Oprah Winfrey as astral being Mrs. Who in a blinged-out orange dress, and Reese Witherspoon’s Mrs. Whatsit turning into a giant, goofy looking lettuce wrap with wings. Then suddenly just when you’re about to overdose on the overly sugary sci-fi locations and creatures, the heroic young trio finds themselves in the heart of an expanding universal evil, sparking the most impressive designs and visual shots in the entire film.

It’s during this second half of the film where the story does a 180-flip into a dark fairy tale with gorgeously choreographed sequences and clever twists that elevate a movie that was starting to feel like a big budget version of a made-for-the-Disney-Channel flick. Not only do the visuals improve immensely, so do the stakes and the performances of the young cast. Young scene-stealer McCabe chews the scenery in the back half of the film with the poise and exuberance of someone three times his age, and Reid shows how this truly talented young actress was able to land such a big lead role in her first major outing with some emotional scenes.

As for the veteran adult actors in the cast, well… they don’t score marks quite as high. Pine phones in a good portion of his scenes, but to his credit is terrific in a select few others. Winfrey is disappointingly bland (despite her outfits), turning in a performance mostly lacking the charisma that has thus far made her who she is today. Mindy Kaling is awkward and uncomfortable almost every time her character Mrs. Who has to deliver dialogue, even though on paper she was is an inspired choice. Thankfully, Witherspoon at least seems to be having fun despite still looking awkwardly off in certain scenes much like her astral sister costars.

The story becomes so full of sci-fi gobbledygook with little logical explanation and supported by exposition that is clearly setting up loopholes in the narrative to finish the story, that it all becomes frustratingly hollow more often than not. Thankfully, the young cast mixed with the positive messages and some well-done family moments do provide some heart and substance just in time to avoid a Wrinkle disaster.