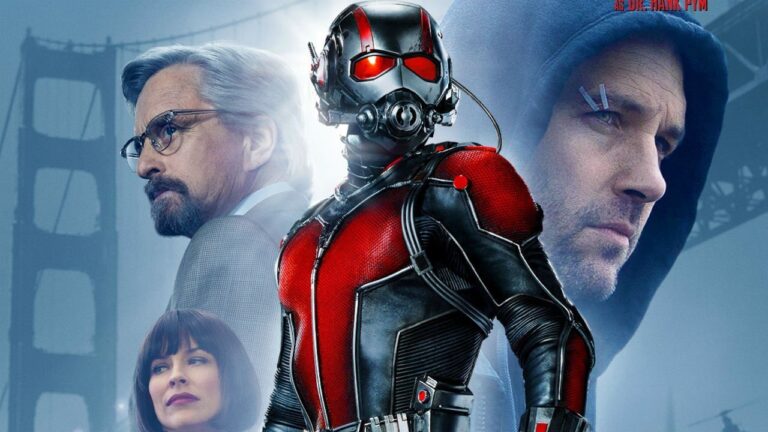 After a nearly decade-long development period, creative differences which saw original writer and director Edgar Wright depart just months before shooting was scheduled to begin, and last-minute script rewrites, Marvel’s Ant-Man has finally made it to the big screen. It’s easily been the studio’s most troubled production, and many expected the problems behind the scenes to have a negative impact on the finished film.

But fear not, true believers: eschewing the enormous scope of Marvel’s recent entries in favor of a more character-driven tale with a great mix of heart and humor, Ant-Man is one of the most enjoyable films the studio has produced yet. This one should easily carve itself a place somewhere between the fun and excitement of the original Iron Man, and the hilarious absurdity of Guardians of the Galaxy.

Recently released from prison after committing a Robin Hood-style crime against a security conglomerate, Scott Lang (Paul Rudd) is desperate to get his life back on track and begin spending time with his daughter. But a criminal record means limited job opportunities, and Lang reluctantly agrees to join his former cellmate (Michael Peña) on a burglary that finds him infiltrating a millionaire’s mansion and absconding with the contents of his safe.

Instead of money or jewels, the safe contains what Lang assumes is “an old motorcycle suit,” but which turns out to have an impressive set of properties – namely, the ability to shrink its wearer to the size of an insect while simultaneously giving him super-human strength. The suit was invented by Hank Pym (Michael Douglas), a brilliant scientist whose revolutionary discovery of the “Pym particle” was responsible for huge advances in technology – advances which also attracted the attention of shadowy government agencies with an eye toward militarization.

Pym chose to retire rather than disclose the secret of his formula, but his former business partner and protegé Darren Cross (Corey Stoll) is on the verge of replicating Pym’s success with the Yellowjacket, a weaponized version of Pym’s original design. Fearing the ramifications of his technology being unleashed and used for warfare, Pym enlists Lang to infiltrate Cross’ facility and steal the tech right out from under him.

If these sound like the ingredients for a heist film to you, then you’re not wrong – Ant-Man is absolutely a heist film, complete with a crew that includes the tech guy (David Dastmalchian), the driver (Tip “T.I.” Harris) and the inside man (Peña). It may not be as slick and stylish as Ocean’s Eleven or as white-knuckle intense as Reservoir Dogs, but the film still has plenty of personality, thanks to Paul Rudd’s affable every-man demeanor and a steady stream of humor.

Fans of the previous Marvel films will expect a healthy dose of action, and Ant-Man delivers on that front, as well. The third act in particular features some of the studio’s most wildly inventive sequences yet, with a few hilarious and unexpected surprises that should have audiences howling at the screen. There’s also an encounter between Lang and another recognizable Marvel character that is not only exciting, but lays some important groundwork for the future of the Marvel Cinematic Universe – stick around until the end credits have stopped rolling to see what I mean.

With so many last-minute changes on the production side, Ant-Man could easily have been a disaster, but director Peyton Reed (Bring it On, Yes Man) stepped up to the plate and met the challenge head-on. The result is a more light-hearted approach to the superhero genre, and one that serves as an excellent palate cleanser for the solemnity and bleakness of Avengers: Age of Ultron. It will be interesting to see how Lang fits into the big picture – especially with Captain America: Civil War destined to be another somber affair – but after this adventure, we’ll be ready to welcome Ant-Man back with open arms.

A character-driven superhero tale with a great mix of heart and humor, as well as some of Marvel's most wildly inventive action sequences yet - many of which are also laugh-out-loud hilarious. Highly recommended.