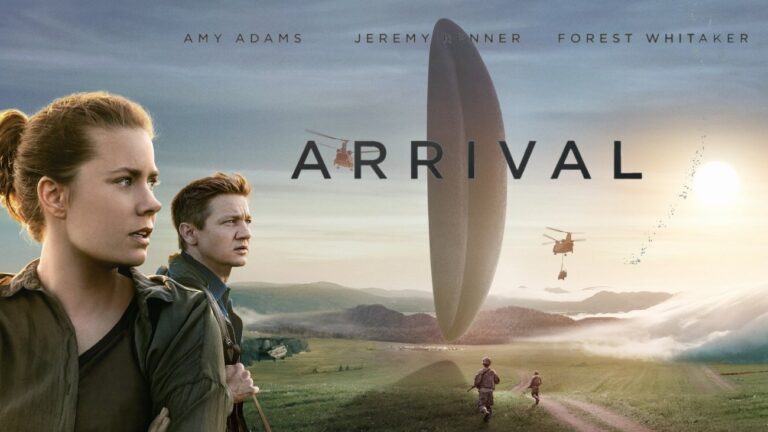 Arrival is the latest from Sicario director Denis Villeneuve and tackles the often visited sci-fi subject of “first contact,” but the film itself is anything but common and provides a breathtaking, tense and emotional journey that uses sci-fi in the perfect way to tell a personal human story.

I implore all of you reading this review to go out this weekend and see this film – namely because it is terrific, but also Arrival is best viewed when knowing very little going into the theater. Once spoilers and images from the film start to hit the internet and television commercials try to squeeze the last dollar from the film, some of the artistry will lose its impact and the tension building that is masterfully choreographed won’t be as powerful.

So with that in mind, I will avoid any direct spoilers while giving you my take on the film, but know that major parts of the film that make it great will not be discussed here. Arrival centers around linguist Dr. Louise Banks (Amy Adams) who is called upon, alongside mathematician Ian Donnelly (Jeremy Renner), by US Army Colonel Weber (Forest Whitaker) to help establish communication with extraterrestrials after their mysterious oval-shaped crafts begin appearing all over the globe.

The building tension leading up to the reveal of the life forms is excellently paced and absolutely gripping and made even more so by a frantic, haunting score from Jóhann Jóhannsson using vocals and experimental piano loops. Arrival is an intelligent, thought-provoking sci-fi scale with global scope – but don’t expect anything remotely like Independence Day-style invasion action, because this film is all about the journey of both Adams’ character and the entire human race.

While Adams’ Louise has an enormous arc in the film with a twist that will no doubt have many people talking while exiting the theater, it’s Renner’s Ian that provides the warm heart of the film and the actor wonderfully balances the steadfast, stoic Louise. Whitaker also brings his likable gravitas to the otherwise generic military role that is used to advance plot points.

One of the highlights of the film is the fascinating and intelligent ideas and philosophies that are presented within the story. Concepts like our place in the universe, our bonds with one another, and even time itself are all explored from wholly unique perspectives. Arrival will mess with your head in all the right ways and will leave you not quite viewing your life and the world in the same exact way, possibly ever again – I also mean this in all the right ways.

The film’s only obvious flaw is a running time of just under two hours that still feels too long. Arrival is based on the novella Story of Your Life by Ted Chiang and the film is clearly padding the source material out to reach a more standard run time for an Oscar film. If it had some more editing, the story would have had much better flow while keeping tension and emotions high.

But this film is still a fantastic achievement for director Denis Villeneuve, proving he is much more flexible of an artist than what was presented in violent films like Sicario. Arrival is a beautiful, moving piece of filmmaking that is a shining example of what science-fiction can be when approached with more intelligence and less lasers and explosions.

The film is brimming with fascinating concepts, thought provoking philosophies and emotional performances from its talented cast in one of the best sci-fi films in years and also one of the best pictures of 2016.