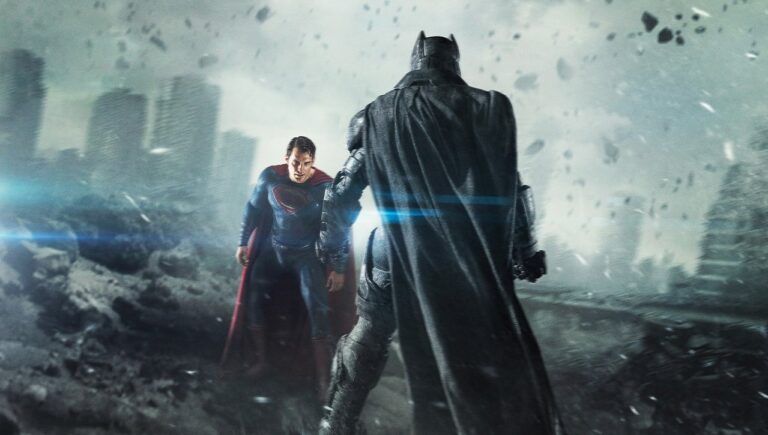 *We preserve the major secrets of the film, but beware some minor spoilers ahead*

Batman v Superman: Dawn of Justice is finally making its long journey to the big screen marking the start of what Warner Bros. hopes to be the launch of their full DC Comics cinematic universe. The film, directed by Zack Snyder (Man of Steel), showcases the epic confrontation of fanboy dreams between the two legendary icons, while introducing a slew of recognizable and new faces from the DC comics pages.

Full disclosure: you’re reading the review of life-long, hardcore DC Comics fan and while I normally can approach most film projects without bias, this one is just too ingrained in my DNA for it not have some effect, so take that for what you will.

Batman v Superman: Dawn of Justice finds Bruce Wayne (Ben Affleck) in the later years of his career as Batman – angry, disgruntled, and in mourning (over the apparent death of Robin). Years of protecting Gotham have gotten him nothing but loss and tragedy (in his opinion) without making a real difference.

After witnessing firsthand the destruction in Metropolis during Superman’s (Henry Cavill) battle with General Zod (Michael Shannon) and his forces in Man of Steel, Bruce is given an outlet to direct his anger when he considers the opportunity to make a difference on a global scale – a legacy more worthy than just plucking the criminal weeds of Gotham that just keep growing back – by stopping the threat to our entire planet from this Kryptonian god.

Fears that the story of Batman v Superman: Dawn of Justice would lose its focus from the two legendary heroes in favor of a revolving door of cameos were understandable – yet unnecessary. I was pleasantly surprised to find that the film is very much a well-crafted character study of the psyche of both Batman and Superman and rightfully puts them front and center – with the appropriate amount of punching and explosions, of course.

The script by Chris Terrio (Argo, Justice League: Part 1) and David S. Goyer (The Dark Knight trilogy) does a wonderful job of dissecting where these characters are emotionally, and what the ramifications are of the appearance of meta-humans in this cynical world. Yes, DC comics fans – they are called meta-humans in the film. Rejoice. But this is a very dense, mature film with some quite complex themes and an impending darkness in the visuals, as well as the final act.

After a phenomenal and emotional opening sequence featuring Bruce Wayne desperately trying to save people during the destruction of Metropolis, the empathy for Bruce and his rage is palpable for the audience and any human would understandably harbor his feelings of resentment and fear towards someone so potentially dangerous as Superman – only most don’t have the means or the guts to do anything about it.

I was a vocal detractor of the casting of Affleck as Batman from the start, but I’ll gladly eat crow by saying he turns in quite a superb performance as The Dark Knight in and out of the costume in Batman v Superman: Dawn of Justice. This is an angrier, more volatile Batman than we’ve seen before and Affleck always seems to be holding down an intense urge to Kylo Ren on everything around him.

On the other side, Cavill is pitch perfect as a tragically innocent Superman, in a role written with more layers than his previous outing. The weight of his abilities mixed with the global and cultural impact of his existence, including international legality issues, frustrates him at every corner no matter how much he tries. How does the world police someone who can literally go anywhere and do anything he wants, yet still has the human fragility of making mistakes that can have disastrous consequences, even with the best of intentions?

Context is indeed a big theme of Batman v Superman: Dawn of Justice and the filmmakers wisely masked certain lines of dialogue in the marketing that significantly change the audience’s understanding of the conflict. Things don’t play out quite like you think they will, resulting in interactions and confrontations carrying more weight in unexpected ways.

Context is also where Lex Luthor (Jesse Eisenberg) comes into play in a wickedly manipulative way. I suspect Eisenberg’s portrayal will be somewhat divisive, but fans worried about the goofy nature that he displays in trailers and marketing need not worry. While this is a new and modern Lex – a genius akin to Mark Zuckerberg with even more social awkwardness – he’s still quite dangerous and scary.

My biggest complaint with Eisenberg’s performance lies in a few sections where he goes too big or awkward with his portrayal of the jittery genius. But when his performance is focused and controlled, Eisenberg’s Lex is a formidable opponent that stretches his acting chops to places we haven’t seen him go yet, and the character is truly devious.

But who cares about a character study or inner conflict – this is superhero film, right? Zack Snyder’s eye for action has never been his weak spot and when things go sour for our heroes, the action is breathtaking. Batman moves and fights like he’s brought to life out of Frank Miller’s The Dark Knight Returns – he’s a nimble tank that hits hard and brutal. Superman also uses all of his powers in impressive fashion (at times frighteningly so) and when the two finally clash, it delivers on the promise of the film.

Batman v Superman: Dawn of Justice isn’t a perfect film though. It’s a long movie at two and a half hours, and the pacing sometimes lingers too long on certain scenes and moves along way too fast in others. Additionally, between the numerous Batman films and TV’s Gotham, we’ve seen the murder of the Waynes so many times that its grown tiresome, but the film not only goes back to this moment – it goes back multiple times for unsuccessful impact.

Lois Lane (Amy Adams) also might break the record for the amount of times the character has had to be saved by Superman in one outing. Her relationship with Clark is very sweet and provides a few nice quiet moments, but overall the character leaves the audience slapping their foreheads, because she continually disrupts our heroes by constantly needing help from the Big Blue Boy Scout.

There’s also a lot of DC Comics fan service gobbledygook (that sadly I won’t discuss here to preserve the movie’s secrets) in an attempt to establish the upcoming franchises (including a Wonder Woman solo film and Justice League) that will most likely leave most common moviegoers confused and scratching their heads, while looking for the closest DC nerd to explain it. For people like myself, I raised a fist at most of these moments with excitement, but even I took issue with certain parts of them, and I’m sure the fans will have plenty of time for furious debate leading up to the release of Justice League: Part 1.

But one DC Comics element they most definitely did not get wrong – Gal Gadot as Wonder Woman. She shows up periodically throughout the film and doesn’t have a significant amount of dialogue, but any concerns of Wonder Woman‘s future as a solo franchise should be put to rest now. Gadot is mysterious, sexy and formidable as the Amazonian warrior, and the script does a great job of setting up intrigue around her character and making us want more. Wonder Woman also really enjoys a battle, in refreshingly stark contrast to Bruce and Clark moping around.

Lastly there’s Doomsday, the behemoth monster and arch-enemy of Superman, whom is indeed (aside from Lex) the Big Bad of the film. He’s much more vicious and frightening than the footage we’ve seen so far, but still at times looks like a naked cave troll from Lord of the Rings. He’s much bigger than the original comic counterpart and every bit as fearsome, but the design and special effects leave something to be desired, making for a pretty one-dimensional video game boss fight character.

DC Comics fans can now breathe a sigh of relief though, because they have a working and crafted-with-love cinematic universe, one distinctly different than that other comic book company. It may not be everyone’s cup of Granny’s Peach Tea and it may be darker than some may want, but Batman v Superman: Dawn of Justice is a solid start that represents all of its beloved characters very well and should have fans excited for what’s to come in the DC film franchises.

Explosively delivers on its title promise, while successfully launching the shared DC Comics cinematic universe with a flawed - yet still very enjoyable - superhero battle royale that entertains with big action scenes, and does justice to the legacies of the DC Trinity of Batman, Superman and Wonder Woman.