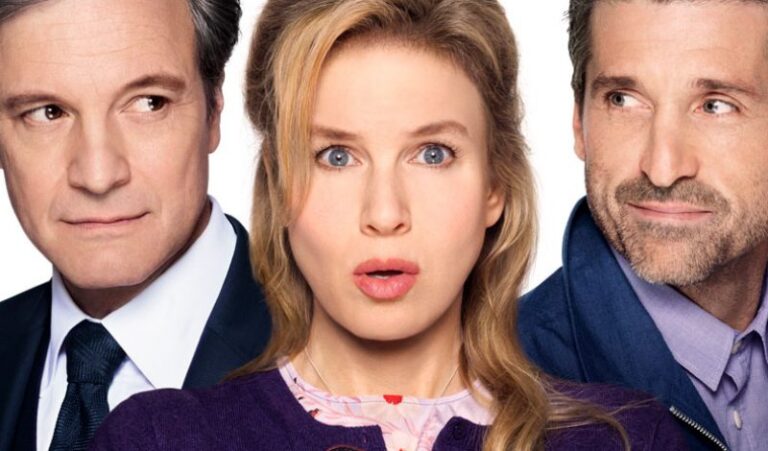 Every now and then us male nerd need to get in touch with our feminine sides, hence why you’re reading my review of Bridget Jones’s Baby. Lucky for me, Renée Zellweger’s long-awaited return to her beloved role packs enough R-rated comedic laughs to satisfy adult audiences of all tastes.

The third film in the franchise sees Bridget in her early forties and single, having broken up with Mark Darcy (Colin Firth). After getting rather irresponsibly bad advice to sleep around by her good friend and co-worker, the adventurous Miranda (Sarah Solemani), Bridget finds herself on a bit of a personal renaissance.

But she soon finds herself in the wake of a one night stand with charismatic American Jack (Patrick Dempsey) and then roughly a week later, another fling with Mark Darcy. Her new outlook on life is put into complete disarray when she finds out she’s pregnant and both men could possibly be the father.

While this may sound like some silly rom-com trope, Bridget Jones’s Baby approaches things with a more witty and mature eye. Zellweger’s career has been off the grid for a while, but she’s still got that awkward bubbly charm that made the character so lovable, and this film portrays Bridget mostly as a very competent, relatable woman with that great dry British humor.

The tone of the film is established early, opening with a sappy romantic song and a sad-faced Bridget looking lonely on her birthday. It’s the stereotype of what every heterosexual male fears from a potential “chick flick,” but director Sharon Maguire plays that setup for a very amusing tonal shift right away that shows the audience this isn’t one of those stories, and Bridget isn’t one of those types of characters to sit around pining and mopey – at least not all the time.

While this film loses one Hugh Grant from the cast (the character’s whereabouts are hilariously addressed in the film), it gains one Patrick Dempsey. Dempsey plays a mogul who invented a “love algorithm” that he’s turned into a successful book series and website. He doesn’t fit as perfectly as Grant in the cast, but he’s quite capable in the role and provides his share of laughs, and has great comedic chemistry with Colin Firth.

Speaking of Firth, his character is given a rather silly B-plot defending a Pussy Riot-like girl band called “Punani” who are being persecuted for women’s free speech in London. But Firth nails every comedic scene and while he’s the long-term love of Bridget, he is legitimately in danger of losing Bridget to her extremely likable Jack – and audience members might find themselves also torn between Jack and Darcy too, since neither character is subjected to the usual love-triangle-breaking-scumbag twist that is the genre norm.

Emma Thompson also joins the cast in the supporting role of Bridget’s doctor, and Thompson’s deadpan treatment of Bridget and her absurd situations is wonderfully dry British comedic goodness. The character is used very sparingly throughout the film, but every scene with Thompson is a home run.

The film is a bit long, clocking in at 123 minutes, and definitely could have benefited from a leaner edit to provide less time between the funnier set pieces. Dempsey also gets borderline campy in his portrayal and dives a little unbelievably deep into wanting to be a father and husband to Bridget, while knowing absolutely nothing about her. Also, I appreciate this story doing its best to avoid “chick flick” cliches, but the film can’t help itself from still trying to give those groan-inducing moments that the genre fans swoon over.

Thankfully, Bridget Jones’s Baby still comes to a satisfying conclusion that feels like a good place for the franchise to end – not that it is meant as a finale – while possibly going out on a high note. The film is good fun and has enough raunchy laughs and heart to be an entertaining movie experience for most adults audiences.

Zellweger still has that adorably awkward charm in the satisfying third film in the popular franchise that comes equipped with quite a few big laughs (some R-Rated) that help relieve the film from hitting too many of the usual rom-com cliches.