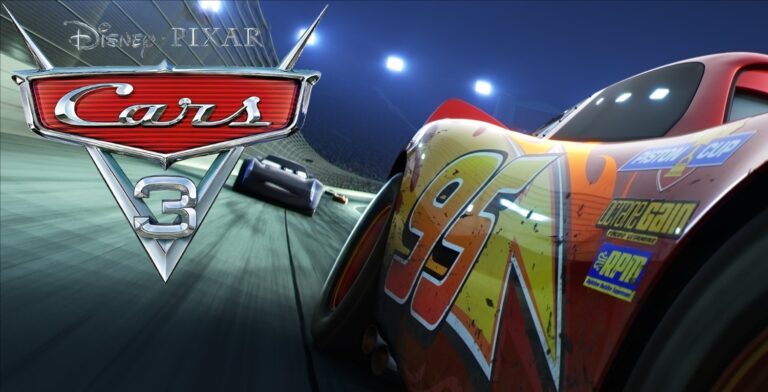 Disney and Pixar’s Cars films have made the studio absurd amounts of money and have delighted kids and their predisposed car obsessions since the release of the original film. Critics on the other hand have been less than enthusiastic about Pixars’s least well-received brand, especially after the disastrous sequel Cars 2. Never one to shy away from a challenge, Pixar went back to the drawing board for Cars 3 and surprisingly delivered not only the most entertaining film in the franchise, but a movie worthy of at least being mentioned in the upper echelon of the Pixar library.

Full disclosure, I’m one of the vocal few that have championed the first Cars film as the underappreciated gem of the early days of Pixar. Sure, it has its pandering to kids and other issues, but it’s also a wonderfully subtle Frank Capra-esque small town story that spends a lot of the film with quiet character moments. Cars 3 takes almost all of the good elements of Cars that are full nostalgia and heart and injects those with just the right amount of gorgeous action and humor that hits more than misses for both adults and kids.

Cars 3‘s story isn’t revolutionary, as it wades through plot lines that are not so subtle homages to other sports genre films (most notably Rocky III & IV), but the film handles the characters with such care that what’s old is new again. When a new crop of high-tech racers led by Jackson Storm (Armie Hammer) begin to phase out superstar Lighting McQueen’s (Owen Wilson) era of racers, he begins to have a mid-life identity crisis. During a race where Storm pushes Lightning too far, McQueen overextends his abilities causing him to have a brutal, near career-finishing crash.

As Lightning begins to pull himself back together for one more racing season to prove his worth, he embarks on a journey that leads him to a new sponsor with an eye for merchandising named Sterling (Nathan Fillion), a new trainer with endless energy named Cruz Ramirez (Cristela Alonzo), along with some ghosts of his deceased mentor Doc Hudson’s (Paul Newman) past.

The voice cast alone is superb, and thankfully Pixar resists the urge to over populate the film with too many main characters. Old favorites like Sally (Bonnie Hunt) and Mater (Larry the Cable Guy) have reduced, but still poignant roles while making room for Fillion and Alonzo’s new characters. Hammer’s role as Storm is far smaller than I expected, but the actor definitely has a talent for playing a smarmy condescending jerk.

Cars 3‘s biggest linchpin for success lied with Alonzo’s Cruz Ramirez, who essentially becomes Lightning’s trainee/partner. The character is written with a lot of emotion and Alonzo is extremely endearing in the role. Her developing relationship with the aging Lightning coupled with her own desire to race is a core element that makes the film so touching, along with the late Paul Newman’s archived audio of unused lines for Doc Hudson’s character, repurposed for this film.

But it’s not all warm fuzzies and emotions, as Cars 3 packs in some dazzling animation into some really exciting action sequences including a hilarious and at times quite tense demolition derby that Lightning and Cruz inadvertently find themselves in as participants. Even little things like the ocean waves while the duo trains on the beach or the mists of the old mountain forest town that Doc came from are just gorgeous.

Besides diminishing Jackson Storm to a completely one-dimensional villain that looks cool and doesn’t do much more than trash talk to be considered the bad guy and an extremely predictable (but still enjoyable) story progression, it’s hard to fault much else with the film. Cars 3‘s story is well paced, the animation is beautiful, and there’s plenty of likable new faces and beloved old favorites helping to buck the trend of franchise third film let-downs.

Pixar kicks it into high gear, redeeming the family favorite franchise with unexpected heart, laughs, and a story that while predictable, treats the characters with the utmost respect in this touching tale of redemption and new beginnings.