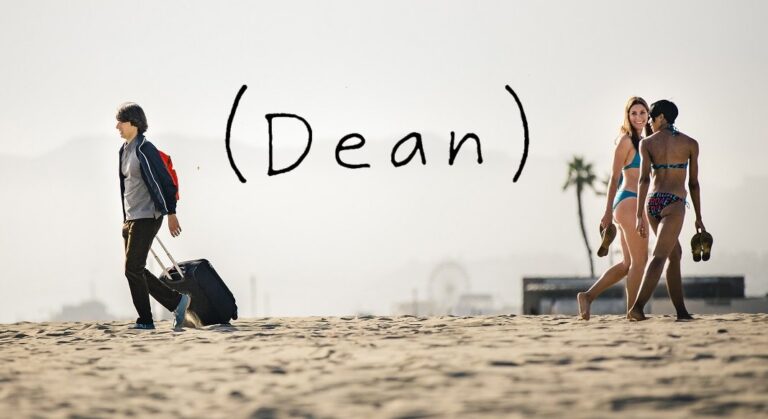 Demetri Martin is best known for his hilarious and thoughtful stand-up and his well received Comedy Central show Important Things with Demetri Martin. After writing several screenplays that never got produced, Martin decided to write a smaller, more personal story which resulted in his first feature film Dean – a somewhat autobiographical story of a father and son struggling to move on after tragic loss.

Martin plays illustrator Dean who draws in felt pen with a minimalistic style and is currently dealing with a type of writer’s block on his new book. Dean is still struggling with the loss of his mother a few years before and following a folly of errors including an embarrassing scene at his best friend’s wedding, Dean decides to take a trip to L.A. in pursuit of some leads on new illustrating jobs.

As much as this film is about Dean’s journey, it is also a parallel one for his father Robert (Kevin Kline) who is trying to sell Dean’s childhood home and move on with his own life – but Dean is both literally and figuratively running away from his problems. Unexpectedly both men meet women that help put them on paths to move on and at the same time come back together as a family.

As a first time writer, director, and producer, Dean is a solid first outing for Martin. The story is obviously a very personal one for him and he handles the grieving of Dean and Robert in very sincere, realistic fashion. It doesn’t hurt that Kline puts in a terrifically subtle performance as Dean’s broken, but still pushing forward father.

The ladies that come into the duo’s lives, played respectively by Community‘s Gillian Jacobs and the always lovely Mary Steenburgen, take their own relationships in different and somewhat unexpected directions. Both actresses are beyond endearing in their roles and strangely seem to be the only other competent people in the entire film.

Which brings me to one of the problems with the film and it’s portrayal of everyone around Dean. It’s unclear if the film is trying to present a hyperbole of common society, but every character other than the main four is represented as stereotype-filled caricatures of jocks, business men or party girls with Dean being the punching bag for all of them. This type of behavior also occasionally gives the film a preachy, judgemental vibe, but thankfully that never sticks around for very long.

Dean also has a healthy dose of Martin’s comedic personality using his drawings for both laughs and an internal reflection of the character’s thoughts on death and loneliness. The images are poignant and clever, delivering as many laughs as gut-punchingly sad reactions to tough moments. It all adds nice unique touches over the wonderful soundtrack choices to give Dean it’s more distinct feel compared to other films of this ilk.

But to be fair, Dean also suffers a bit from the indie dramedy formula that seems to checking all the boxes that an infinite number of other similar films have done before. The moments where Dean really shines are in the smaller details that Martin really nails down of a family’s long-term efforts to establish a new normal after tragedy.

Overall, while Dean may be rough around the edges at times and an indie film on autopilot in others, the underlying level of genuine sincerity displayed from Martin’s personal experience and his unique comedic style shine through more often than not and all four principle actors really elevate the material in a promising first effort for the talented comedian.

For more on Dean, check out our interview with Demetri Martin himself right here.

While the film at times is a bit of an indie film on autopilot, the rest benefits from solid performances from the cast and Martin's personal connection to the material and his unique sense of humor in a solid first effort for the comedian.