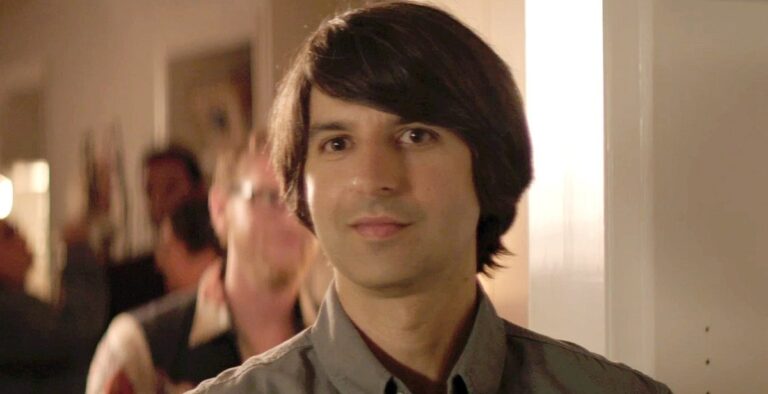 Comedian Demetri Martin is doing quadruple duty as writer/director/star/producer in his debut film Dean. The film is a not-quite-autobiographical, but still very personal story about a troubled illustrator dealing with life after tragic loss told through Martin’s unique comedic eye.

Dean saw its Arizona premiere at The Phoenix Film Festival and I was able to sit down with Martin to discuss the labor of love that is this film to him. Audiences nationwide will get to see Dean tomorrow, June 2, so we wanted to share this insightful, refreshingly personal conversation with the talented star…

Can you walk me through the path of concept to screen for the film?

Demetri Martin: Sure! I mostly did stand-up, but this was probably 5 or 6 years ago I wanted to make a movie, and learn how to make movies to translate what I have been doing on stage into another format. So I did books years ago with comedy essay and stuff. But was like man, I’d love to make movies someday. I like the idea of directing because you are in control of telling your story. So then I thought, what can I do? I sold a couple of pitches for scripts, and then got paid to write some screenplays which still have not been made, and that was like 2005.

So then I finally was like, alright, I have to do this myself. Let me write a smaller movie, rather than some big concept. Something I might be able to get money for, and direct that would be inexpensive. The winner was this idea. Its autobiographical, but its fiction. I lost my Dad in real life who’s name was Dean, so that why I named the movie Dean and that was over 20 years ago. I was 20 years old, my Dad was 46 when he died. As you can imagine that experience stayed with me. I have not talked about that on stage, one man shows, stand-up. It was just somewhere I don’t go to. I like jokes usually.

And I thought to make a movie, it would be great to do something that has a little more emotional heft to it. So I tried to figure out a story based on those experiences, those feelings, and not the facts. I invented this little world here, which is just the real world, just not my total experience. So I wrote the script and found producers. It’s all independent. It’s a true indie. Really low-budget. We shot for 20 days and I got to shoot a few days months later for pick ups, and to fix a couple of things, but it’s like as many pages we could shoot a day.

It was really tough. I was totally thrilled when Tribeca took it, and when it got a prize; I was genuinely surprised. And to get distribution, I keep telling myself, Hey, it’s already a win. If people don’t like it or it doesn’t make money, you made it to the theater, you did it, Just take a deep breath and be happy for once. So I’m just like cool. That’s my wife too, she’s just like, “Enjoy it,” And she’s right. I’m just worried… what if? And she just keeps saying, “C’mon.” I’m trying to write the next script, and be like,  I wanted to make a movie. It’s my first movie, it’s not perfect, but I made it and it’s out there.

You had to juggle a lot of things for your first movie: writer, director, star. What aspect was the most surprisingly difficult for you?

Demetri Martin: Producer. It was the worst. I hate it. I want the credit because I want to be involved in decisions, but I knew directing would be challenging, and it was, but I wasn’t lost. I wasn’t like, “I don’t know what to do or what lens do we use?” I quickly learned, and got it. If I want this type of intimacy in this thing or this will be funnier if I can see the guys whole body… something just tells me I want that. Or, yeah I want to see a two-shot, and see them together on-screen. I don’t want them to be isolated… so things like that, you know.

I think a lot of us are pretty savvy. We’ve seen a lot of movies. If you had to you would kinda know how you want to tell your story.  Now how much time you have is a different deal because it forces it to happen faster. But the producing part of it was just; that’s what kept me up at night. It’s like, “We don’t have a location for tomorrow, it fell through. My god I have to shoot tomorrow. I’m not going to get my movie!” Things like that. “We don’t have a place to have lunch. This parking lot fell through.” Things like that. Producer is not for me. I’ll write, I’ll direct, do my best at acting, but that was stressful.

Kevin Kline’s terrific in the film.

Demetri Martin: Isn’t he? I love him in it! He’s so good.

He’s so understated, but just perfect.  I actually lost my mother and a lot of his scenes in this film are a perfect echo of things families go through during that time.

Demetri Martin: I’m so sorry to hear that. How long has it been for you?

Demetri Martin: I’m really sorry. Eight years isn’t easy. None of it’s easy. I mean I get choked up when I think about it because, it’s been 24 years and my Mom is really sick right now. She has Alzheimer’s. She got sick 9 years ago. So she’s been declining the past 4 years or so, so the film is also about that.

I don’t know about you, but for me, the original title was The First Thing You Never Get Over. Now that might not be your first thing, but for me it was because I was 20. For me there was life before that, and life after that. Now, my life, I’m happy often. Life goes on obviously, but you’re catapulted into this parallel reality that feels like fiction. Especially now with both of my parents gone. I don’t know, it’s like make-believe. I have kids, I made a movie. They will never know about it.  My wedding? All these things. Oh my god it’s like Make-believe Land.

But I was so grateful to get Kevin, because to me he is one of the few actors that can do comedy the way he does and real dramatic acting. Now this movie didn’t require real heavy dramatic acting, but I want there to be a reality and vulnerability to the performance. And it was a pleasure to be on-screen with a guy like that. And then you get to the edit, and to see those performances. I got to know him a bit, but I don’t know what losses he’s endured, but it felt like he certainly knew what loss was by the performance he gave in the movie.

Definitely. And everything felt very sincere. The performance and interactions all translated very well. I really love how the drawings were used in the film. And not just the pictures, you cleverly put them in there with text messages and stuff. During the process did you already have those in the script or did you draw them as you were filming and add them in after post?

Demetri Martin: I had about half in the script, 50%, because some of them existed before the movie. It turns out that as I was going and doing drawings for fun, a lot of them developed on the airplane or before going to bed at night I will doodle. It’s low stakes, doesn’t matter. Sometimes I’ll come up with one that I like, and I’ll circle it or something and be like, “Yeah”.

So I had enough about the grief and loneliness, it turns out drawing is therapeutic for me. So that’s why I made the character an illustrator. I thought, okay I’ll be a comedian at some point in the future. But let me use drawing as a way into his emotional journey. And then when it came to the edit I had to come up with more drawings, so I was always drawing and adapting through the process.

My favorite drawing I think was, “Please use this in the end credits”

Demetri Martin: Ha, that one came up late in the process. I thought,”Hey! Maybe we can have a slide show. It could be nice to show some extra drawings in case the crowd responds to them.”

I laughed out loud at that moment! It was very funny! The music choices were also a nice aspect of the film.

With the drawings, everything going on how did you choose what music to put in the film?

Demetri Martin: Pete Dello. I had this CD for years, Pete Dellos and Friends. I don’t know where I got it, but I always loved it. When I was editing the movie I was looking through my little library of music, and was like, let me try this song and it worked so nicely, giving it a feeling and a place.

And as we went on, I tried more and more of his songs. Foolishly, because I had no guarantee I could get that music, because this is a low-budget movie, but I emailed him. I found his address. The album is from 1970, he’s still alive and lives in England. He’s English and I found an email address for him. I wrote him, he wrote me back and was very generous. I was lucky I got the music, because I think it’s a really important part of the movie. I love his voice and the production value is really good. It doesn’t sound like nostalgic or lodge rock. It works!

I looked it up after the film and had no idea it was from the 1970’s, it sounded very modern and so great. Thanks so much for the interview!