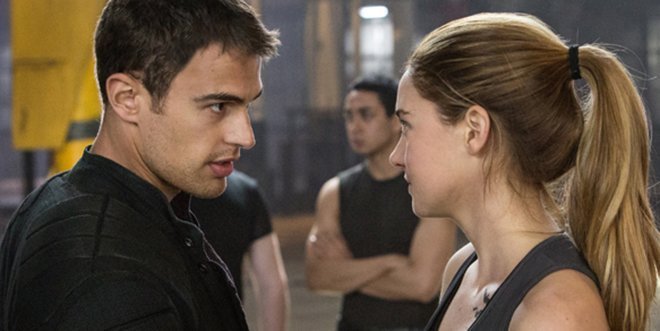 Big budget adaptations of popular young adult novels have become the latest trend in Hollywood, with each major studio hoping to create the next Twilight or Hunger Games phenomenon. While many of these quick cash-in attempts have resulted in embarrassingly low box office returns, Summit Entertainment’s Divergent, based on the bestselling novel by Veronica Roth, could very well be the proverbial “next big thing.”

In the future, society has been divided into five factions, each with a defining personality trait and a specific social role to fulfill. At the age of sixteen, each member submits to an aptitude test designed to guide them into choosing a permanent faction, but Tris (Shailene Woodley) is shocked to learn that she is “divergent,” showing equal aptitude for more than one faction. Not only is Divergence rare, but many consider it to be a dangerous condition that could threaten the delicate societal balance, and Divergents are routinely met with “accidents” that leave them in a body bag.

In order to distance herself from her family members and keep them from discovering her secret, Tris elects to join the Dauntless faction, an elite group of warriors tasked with defending the city. But Dauntless training is more than she bargained for, with a hostile fellow recruit (Miles Teller) garnering an obscene amount of pleasure from pummeling her in the combat ring while faction leader Eric (Jai Courtney) nods his approval. She finds comfort and solace in Four (Theo James), who seems to understand much more about her than she chooses to reveal, and who might be her only hope for salvation.

Divergent spends a hefty amount of time building its world and establishing its characters, and despite stilted dialogue that finds itself in dire need of a punch-up, the relationships still feel genuine and relatable. Woodley and James have palpable chemistry, while Teller and Courtney play their villainous roles with gleeful abandon. Kate Winslet also has an enjoyable turn as a sinister government official whose interactions with Woodley are chill-inducing – expect her to play a major role in the eventual sequel.

Divergent is at its best when the action finally gets rolling, which admittedly takes awhile due to the colossal amount of exposition required. Woodley never quite looks comfortable throwing punches and wielding weaponry, but her talent and charisma do a nice job of balancing the scales, and she carries the film admirably. By the time the credits roll, audiences should be entranced by Tris and eager to follow her along to the next step of her adventure.