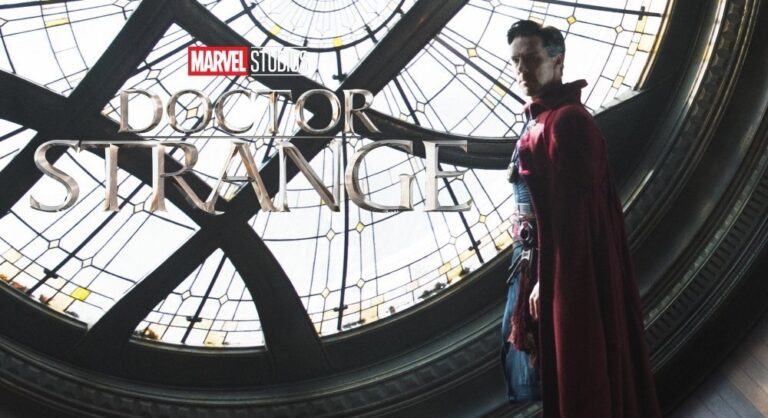 The Marvel Cinematic Universe is opening the mystical door to “magic” with the release of the Sorcerer Supreme’s debut film: Doctor Strange. While not quite A-list, Doctor Stephen Strange is definitely one of the more iconic heroes in the Marvel comics universe and his introduction is a wild, trippy ride that continues the MCU’s mark of excellence.

Fan favorite Benedict Cumberbatch (Sherlock) stars as the titular doctor, introduced as a neurosurgeon at the top of his game. Strange is a lot like Tony Stark – a rock star in his field of expertise with confidence to the point of arrogance – but Strange lacks the good-natured charisma of Stark and comes across rather brash and unapproachable.

But when a brutal car accident leaves Strange’s hands shattered and incapable of the precision for his chosen medical field, he begins to spiral out of control, becoming desperate to recover his abilities and purpose. His quest exhausts the capabilities of the medical world and leads him on a last-ditch effort to find a rumored “spiritual” fix for his nerve-damaged hands. But what he finds in his journey is bigger and more life-changing than he could ever have imagined as the world of magic and sorcery is unveiled before his eyes.

Doctor Strange is in no way a perfect film, and suffers from many of the shortcomings of Marvel origin movies, having more in common with Marvel’s other previously lesser-known hero franchises like Guardians of the Galaxy or Ant-Man. But Doctor Strange makes up for these stumbles in other ways, namely by presenting some of the most incredible and inventive action sequences put to film since The Matrix.

There’s no doubt you’ve seen the very Inception-like footage used in the marketing for this film, but director Scott Derrickson and his visual effects team bring an even more impressive display of them within the film. Battles run up and down skyscrapers with reality bending in all directions and portals swallowing combatants with crazy physics, making everything feel even more fantastic. I will even go against my normal position and highly recommend you see this film in 3D – Doctor Strange is one of the best 3D experiences I’ve ever had in a theater.

But Doctor Strange does struggle, and it’s in one the most surprising areas – with Stephen Strange himself. Cumberbatch is phenomenal casting and he’ll be great in the role for years to come, but the character is written very inconsistently, especially earlier in the film when he is insufferable, making it quite hard to get a read on the character. The film takes a while to get Strange to an endearing point, while also not doing a great job of selling his journey from a magical noob to an advanced sorcerer.

The rest of the cast fares much better and includes Mads Mikkelsen (Hannibal) starring as the surprisingly empathetic villain Kaecilius. Mikkelsen really sells some bad expositional dialogue with a gleam in his eyes, elevating a mediocre-on-paper villain. Mikkelsen not only can pull off the intelligence aspect of the Kaecilius, but he can hold his own in the physical realm of the fight sequences.

Rachel McAdams essentially reprises the role of Rosario Dawson’s Claire Temple from Marvel’s Netflix shows with her character Christine Palmer, a mild love interest for Strange that is treated horribly by him in early in the film and is then used as a “medical crutch” later on when heroes get injured. Christine could have been another forgettable Marvel female supporting role like Natalie Portman’s Thor character Jane Foster, but McAdams is so darn likable that she can hold the screen with just her charm alone.

Much was made about the casting of actress Tilda Swinton as The Ancient One, due to her being both Caucasian and female, but Swinton is tremendous in the film and a clear highlight. The Ancient One is essentially Morpheus to Strange’s Neo, but Swinton imbues the role with a wonderful playfulness, and the character itself is complex and layered.

Last but certainly not least, parallel to Strange’s ascension to Sorcerer Supreme, the film also serves as an origin story for a villain: Doctor Strange comic nemesis Baron Mordo, played by the great Chiwetel Ejiofor (Twelve Years a Slave, Serenity) Mordo is instantly more likable than Strange and remains so throughout the film with his staunch morals and dry humor, thanks to both the writing and Ejiofor himself. His eventual fall/descent is one of the better-handled arcs in the film, making him very relatable to the audience.

Needless to say, due to the terrific chemistry and charisma of the cast and the absolutely astounding action sequences that occur fast and furious throughout Doctor Strange, Marvel Studios has another winner on their hands. It may follow some predictable origin arcs and clumsily handles a few plot lines and character moments, but the film introduces and explores a new corner of the MCU with explosively entertaining results.

Astounding and incredibly inventive action sequences are highlighted by an extremely charismatic cast, combining to mostly overshadow a sometimes clumsy origin story. A rare "must-see in 3D" film that pops with color and trippy reality-bending special effects that explore a new and interesting corner of the MCU.