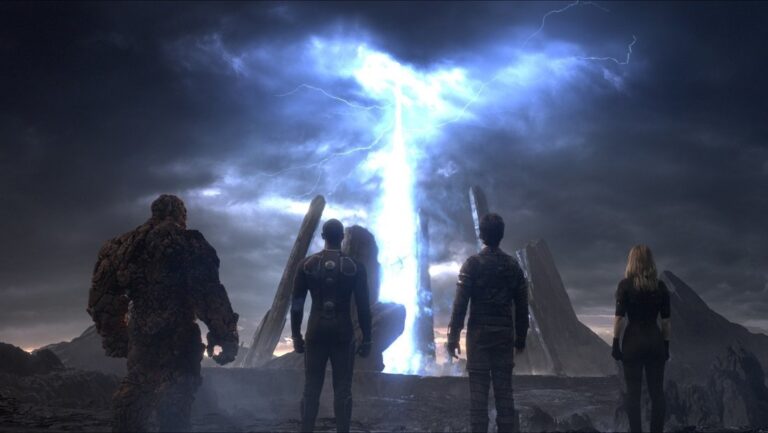 The first family of the Marvel Universe is taking another crack at big screen stardom with the new Fantastic Four reboot, from the visionary director of Chronicle, Josh Trank. After the critical and fandom mutual dislike of 2005’s Fantastic Four and 2007’s Fantastic Four: Rise of the Silver Surfer, the director decided to do what every other franchise reboot does: go gritty.

Reed Richards (Miles Teller) is a boy genius growing up in a lower middle class neighborhood in New York, tinkering with spare parts to one day achieve his dream of being the first man to use technology to teleport. He’s generally laughed at by teachers and somewhat feared by his aloof parents. The only person who believes in him is his new friend Ben Grimm (Jamie Bell), and the two grow up together working on their teleportation device.

As you might have guessed, a trip to the other dimension (or Planet Zero) goes awry, imbuing all five kids with dangerous and fantastic powers.

The problem with Fantastic Four is that it’s so scared of repeating the blunders of the previous film attempts, that it doesn’t stop to have any fun. The film very much takes the same approach that Marc Webb used with The Amazing Spider-Man, by grounding the film in a real, non-cartoon-ish New York, and doing everything they could do story-wise to take the subject matter seriously. But this is a much greater fault in this Fantastic Four film, than the aforementioned web-slinger franchise.

Also, much like The Amazing Spider-Man, the new cast is actually very good in their roles, but find themselves trapped in a film that uses them poorly. Teller brings the right intelligence and awkwardness to a modern-day version of Reed Richards and Michael B. Jordan has all the charisma Johnny Storm exudes. Jamie Bell brings a lot of soul to a welcome CGI upgraded Ben Grimm/The Thing and Kate Mara’s portrayal of Sue Storm at least seems intelligent enough to hang with the boys, and has a few moments to shine where her character isn’t too uptight. She’s the weaker link, but still better than the creepy-fake blonde, demon blue-eyed version that Jessica Alba brought to the role in the previous films.

Unfortunately, these characters never become the characters we want them to be, until really the final shot of the film. After the transformation, The Thing is mopey and depressed most of the time, Johnny isn’t all that much fun anymore, and Reed and Sue barely seem to like each other afterwards.

I can forgive script problems and poor story editing for the core team, since I still enjoyed the actors in the roles. But once again, swing and a miss with Dr. Doom – they tried again and failed. Toby Kebbel portrays pre-transformation Doom as a hipster, hacker douchebag with a “here, then gone” Latverian (?) accent. When he finally turns into Dr. Doom it makes no sense – he looks like a glowing, green, castrated action figure with powers that are never defined/explained and seem to do whatever they need to do in the current scene.

The last nail in the Fantastic Four coffin is how long the film takes in getting through the pre-accident origin. I might be the only person on the planet that still enjoys origins and reboots, but even I got bored waiting for the quartet to finally learn to kick some ass. But what happens the minute they get their powers? Time jump to one year later. They skip the potential fun stuff in favor of a montage and then put the film on fast forward towards the finale.

There are some neat ideas in the film, like The Thing working Black Ops missions for the military during the time jump year, and the obvious Ultimate Fantastic Four-influenced dimension discovery plot point to drive the origin, but they’re just small glimpses of cool in an overall messy, disjointed film.

Fantastic Four is a disappointing attempt by Josh Trank to revitalize the franchise, after his stunning debut with Chronicle. The film intelligently chooses to clock in at just over 90 minutes, but you’ll feel every minute of that running time.The four lead actors are quite good and I’d be open to the team/cast showing up in another film or franchise (perhaps the X-Men films as rumored?), but the creative forces behind another Fantastic Four appearance need to have a much better vision for these iconic characters.

A rudderless, disappointing attempt to revitalize the franchise, wasting some truly great casting of the iconic quartet in a film that takes itself too seriously. The short running time helps, but obvious reshoots and rewrites instead deliver what feels like an extended prologue to a Fantastic Four movie.