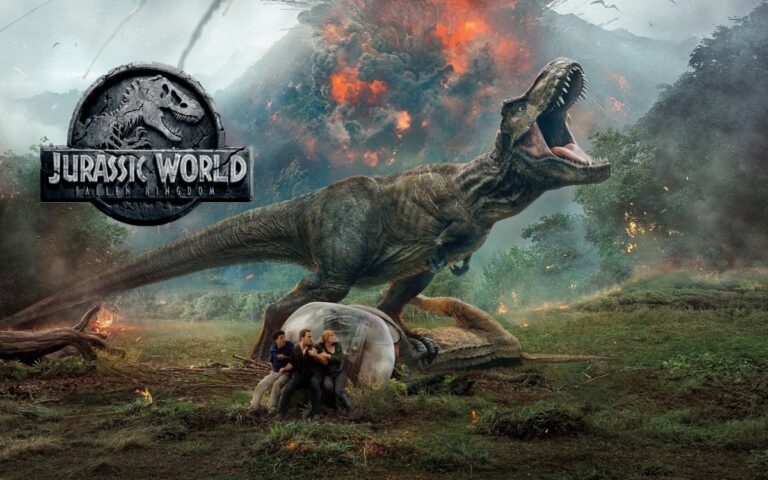 Jurassic World succeeded in resurrecting the dormant Jurassic Park franchise while also solidifying Chris Pratt as a blockbuster leading man. The film preyed on our current wave of nostalgia while attempting to recapture the original film’s vibe of an amusement park gone wrong with mostly commendable success, if not feeling a bit like a carbon copy.

The sequel Jurassic World: Fallen Kingdom, this time directed by J.A. Bayona from a script once again by Colin Trevorrow and Derek Connolly, sees the dinos living in the decimated park on Isla Nublar and in danger of going extinct once again when the local volcano goes active. The government ultimately decides to let nature take its course, but that won’t stop Eli Mills (Rafe Spall), the ambitious and corny right hand man of Benjamin Lockwood (James Cromwell) – John Hammond’s former partner in the invention of the dinosaur-cloning technology.

Due to their previous work at Jurassic World, Mills enlists the help of Owen Grady (Chris Pratt) and Claire Dearing (Bryce Dallas Howard) along with some unsavory mercenaries and spunky sidekicks to head back to the island and rescue a few specific species of dinosaur for “science,” and definitely not financial or military gains. *eye roll* Things obviously go badly from there, Jeff Goldlbum does a voice-over, dinosaurs run amok and only the truly bad people get eaten. Welcome… to Jurassic Bleh!

Where Jurassic World in its best moments recaptured the magic of the original, Fallen Kingdom fails in almost the same ways Jurassic Park: The Lost World failed: a strong opening followed by a horrendous second half. Much like Lost World, this film peaks very early with the far-too-short volcano explosion that should have been expanded into multiple fun and innovative escape sequences, but instead is rushed so the story can return to the mainland.

Pratt and Howard are not to blame for this messy, overly ambitious sequel. Both bring their usual charm – Pratt with his dashing, sarcastic rogue personality and Howard with her plucky heart of gold that made them likable new leads for the franchise in the previous film. No, the issue here lies in the apparently irresistible need for escalation with this types of scare-centric franchises.

The entire second part of the movie is all about topping the previous down to yet another genetically engineered dinosaur à la the Indominus Rex in Jurassic World. Aren’t dinosaurs cool and scary enough?! Is a genetically enhanced super-dino necessary? Twice?? There’s an infinite amount of exciting things that haven’t been done in these films with real, scientifically certified dinos that actually roamed the Earth.

Fallen Kingdom not only uselessly tries to reinvent the dinosaur, but it also sloppily tries to reshape the entire franchise after the briefly entertaining adventure on the island. There’s a quite silly plot twist that I won’t reveal here that attempts to up the moral quandary of the films a peg or two. Alongside that forced “surprise,” the film spends the final act with a ham-fisted attempt to set up a new direction for the next sequel. It left me wondering why they didn’t just explore that setup here in this film, instead of wasting our time with a weak, cliché-ridden final act.

While I found major problems with the many lame homages to Jurassic Park (don’t expect much Jeff Goldblum) in this film, the visuals are definitely worth praising and are some of the most consistent in the franchise. The mix of practical and CG effects on the dinos are stellar, with fewer moments of obvious CG than in the previous film, and Bayona made solid choices on when to use one method or use the other.

The big blockbuster spectacle of the film’s set pieces and its enormous, scaly stars do add some enjoyment, if you lower your expectations. Lovers of these wildly popular thunder lizard films could find a cheap, jump scare joy ride to escape the summer heat. Unfortunately these movies work best when they get back to their basics: dinosaurs escaping a park and hunting the visitors that are trapped inside. Fallen Kingdom attempts to break that formula to the detriment of the film and the Jurassic future that may or may not now be on the horizon.

The likable cast and early dinosaur volcanic action are the only reason to consider buying a ticket to this empty calorie summer blockbuster. The solid opening act is stomped flat by weak homages, bad story choices and cornball dialogue.