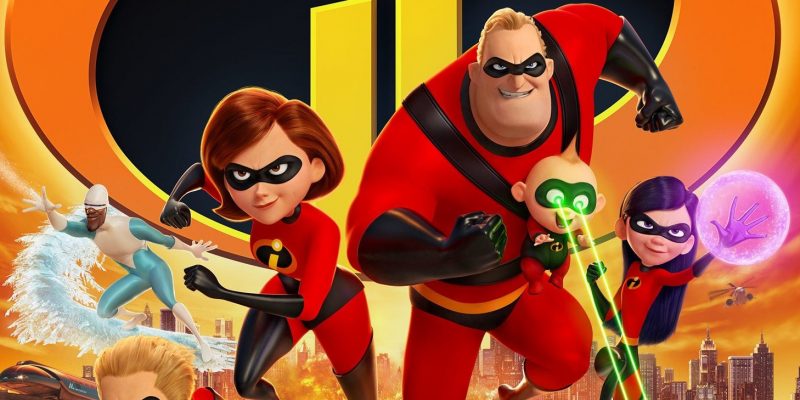 Fourteen years have passed since Pixar graced movie screens with their first and only venture into superheroes, The Incredibles. The flights and tights genre hasn’t gotten any less popular since then, and after all this time director/writer Brad Bird has finally found the right story to bring the beloved superhero family back for another big screen adventure in Incredibles 2.

Picking up right from the battle with The Underminer (John Ratzenberger) that ended the first film, the sequel sees the Incredi-Family and their super-brethren still forced to hide underground even after publicly defeating Syndrome and now The Underminer. Entrepreneur Winston Deavor (Bob Odenkirk) witnessed The Underminer heroics and saw an opportunity to bring the supers out of hiding by legalizing them again with the right face in front of the movement: ElastiGirl (Holly Hunter).

Unfortunately for Mr. Incredible (Craig T. Nelson) that means he has to assume the role of stay-at-home parent for Violet (Sarah Vowell), Dash (Huck Milner), and baby Jack-Jack while his wife gets the spotlight. But when a new supervillain called Screenslaver sets sights on Elastigirl while Mr. Incredible realizes raising kids is his most difficult task yet, the family must unite for the good of supers and non-supers alike.

Incredibles 2 is every bit as good a sequel as Pixar has whipped up to date, and while it isn’t quite as good as the original film, some aspects do manage to surpass its predecessor, with the most prominent element being the tremendous visuals and choreography in the non-stop super action sequences. The first half of the film focuses on Elastigirl’s solo missions to stop Screenslaver and the creativity and ingenuity in how she uses her powers in tandem with her motorcycle are as good as – if not better – than anything Marvel or DC have ever done on film.

Once the story shifts to feature more of the family and the other super characters like Frozone (Samuel L. Jackson), the creativity continues with interesting power dynamics between the adult heroes, the children and the rookie supers. The film is dazzling to watch as powers clash and each character ups their game to complete their task or defeat their villain.

But what good is an Incredibles movie if it doesn’t nail the heart and family dynamic that made the original an instant classic? Brad Bird knows this and the sequel is full of great, quiet character moments alongside hilarious and also heartwarming family interactions. Bird also reprises his fan-favorite role as Edna Mode in a perfect utilization of the character that never overstays her fabulous welcome and leaves you wanting more.

The biggest fault I can find with the movie is in the character of Bob Parr, aka Mr. Incredible, and his inherent selfishness. The first film had many scenes where he seemed more concerned with his mid-life crisis than his family, but he would always come to realize it and make up for it. This film takes him further down that corridor with the first act of the film featuring a Mr. Incredible that thinks his wife is inferior to him as a hero and constantly makes decisions based on what is best for him. But the big difference here is as Bob learns his lessons this time out he never apologizes or acknowledges his boorish behavior to those around him. He may have evolved, but his family didn’t deserve that treatment before his epiphany and his lack of honesty frustratingly gets him in consistent trouble in these films

The gorgeous retro-future design style of the first film is also back, although nothing gets as eye-popping as Syndrome’s Volcano Lair from The Incredibles. The overall story also has some legitimate twists and the new characters bring some really fun moments of action and intrigue, with twinges of more adult story undertones and moral questions, much again like the first film.

Everything that made the original Incredibles film so beloved for fans (and my favorite Pixar film) is back around for this second outing, and audiences of all ages will fall in love again with the world Brad Bird has created. The film may not accomplish the near impossible task of topping the first one, but Incredibles 2 is still a great film and as good a sequel as fans could have reasonably hoped.