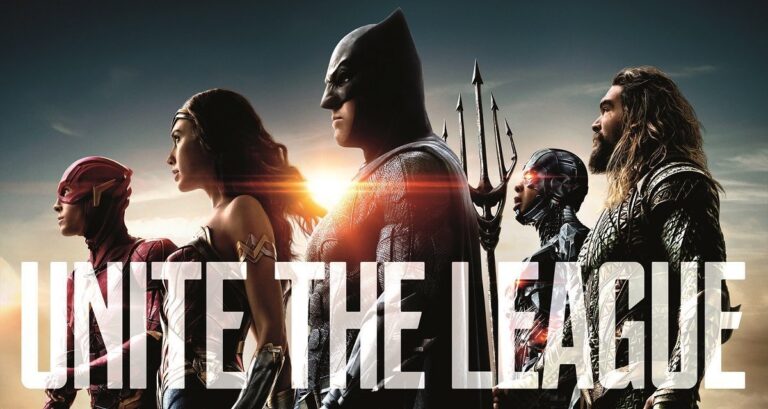 Warner Bros. has doubled down financially to protect their DC Extended Universe after their flagship superhero team-up Justice League suffered massive behind the scenes turmoil. Millions of dollars and weeks of reshoots later, the legendary Justice League finally debuts on the big screen and somehow manages to come together in an extremely fun, but still messy film despite the odds against it.

Following the death of Superman (Henry Cavill) in Batman v Superman: Dawn of Justice, the world is plunged into depression and fear as the looming threat that Batman (Ben Affleck) first suspected finally starts to rear its parademon head. The Dark Knight knows he needs help this time and sets out to reunite with Wonder Woman (Gal Gadot) and recruit the handful of other metahumans the duo have discovered to help face the massive threat that has already begun its attack on Earth.

While I will remind you dear readers of my unapologetic DC fandom that surely to some degree sways my enjoyment of the film, Justice League is undeniably the most light-hearted, colorful and ambitious outing attempted thus far in the DCEU. Wonder Woman is still the benchmark of high quality for these modern DC films, but there’s a frenetic giddiness to this film once it gets going that truly feels like a Justice League story (especially the early 2000’s animated series) brought to life in live-action.

There’s a wonderful sense of hope and optimism, from the very first scene involving a flashback with Superman filmed on cell phone that marks a distinct line in the sand announcing the tonal change of this shared cinematic universe. Every character, including (and especially) Batman has multiple legitimately hilarious lines – most stemming from the undeniable chemistry of the entire team onscreen together.

Newcomers Ray Fisher as Cyborg, Ezra Miller as The Flash and Jason Momoa as Aquaman fill much of the early film with the introduction to their characters. Miller’s exuberance and comedic timing ends up stealing almost every scene and Momoa fares WAY better than the goofy trailers for the film suggest. The Game of Thrones actor has more personality than usual as Aquaman and the underwater scenes with Mera (Amber Heard) in Atlantis are a preview of how potentially cool and original his solo film from James Wan could turn out. Miller immediately deserves a spin-off, and his scenes visiting his father (Billy Crudup) in prison are the most heartfelt of the film, but Cyborg draws the short stick with the worst visual design and least amount of gravitas in the League.

The WB marketing team deserves thanks for leaving out all of the Superman scenes in the trailers and TV spots, because his arrival really provides a treat with that elusively rare element of modern moviegoing: the surprise! Supes’ resurrection marks a turning point in the story as well as the film’s pacing and Cavill is tremendous, and aside from some atrocious CG (both on his Super-stache removal and in the final fight), this version of the character has never felt more true to the Big Blue Boy Scout.

Affleck’s Batman and Gadot’s Wonder Woman get the heavy lifting as the pseudo-Mom and Dad of the team and their dynamic is quite wonderful. Gadot is still radiant and warm and the perfect figure of hope to lead the League until Supes’ inevitable return, but still manages to have some incredibly badass fight sequences including her first appearance during an attack on a museum. Affleck even has one or two laugh out loud hilarious one-liners that are dripping with Whedon-esque dialogue that almost certainly were written as part of Joss Whedon’s reshoots,  taking over following director Zack Snyder’s departure due to family tragedy.

Justice League really shines within the team interactions and development as a group, but unfortunately the rest of the film is where things start to show the cracks of numerous re-writes, reshoots, and cancelling of the original plan for a two film approach. D-List villain Steppenwolf (Ciarán Hinds voicing the CG behemoth) is nothing more than a video game boss villain that seems the biggest victim of the film’s dropped Part 1 & 2 approach. There’s really nothing unique or groundbreaking about anything in the overall story and it really just survives on the sheer charisma of the team and the embracing of the bright comic roots of the characters.

Many predicted Justice League would be a huge disaster and the final nail in the DCEU, but miraculously it feels like the first step in a new chapter after following the fantastically successful lead of Wonder Woman. From Danny Elfman’s reprisal of his legendary Batman theme while also resurrecting John William’s Superman theme, to the surprise DC cameos and tremendously entertaining pair of post-credit scenes, this is easily the most audience-friendly and popcorn fun-style entertainment film in Warner’s modern DC film catalog. Hopefully this flawed but successful first few steps into a new approach will mark the birth of the DCEU fans have patiently waited for.