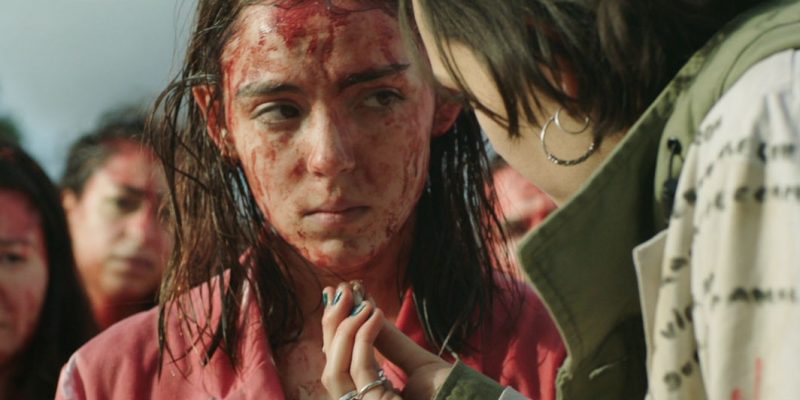 Julia Ducournau’s debut feature Raw, about a young vegetarian who develops an insatiable craving for flesh, arrives on a wave of festival buzz – not to mention anecdotal reports of viewers passing out during screenings, or fleeing the theater in search of a place to deposit the contents of their stomach. While the grisly subject matter didn’t affect me in quite the same way, there’s no denying the grotesquery on display here, as shy, introverted student Justine (Garance Marillier) finds herself losing control of her ever-growing appetite.

It’s the first week of veterinary school, and the freshman “rookies” are in the midst of hazing rituals that include being showered with blood and forced out of their rooms in the middle of the night, sans clothing, to drink and dance until dawn. As part of this rite of passage, Justine is coerced by older sister and fellow student Alex (Ella Rumpf) into consuming a rabbit kidney – not an easy task for a lifelong vegetarian. She manages to choke it down, only to awaken the next morning with her arms, legs and stomach covered with a severe rash, which the school nurse chalks up to food poisoning.

The voracious hunger with which Justine is subsequently consumed is a somewhat heavy-handed metaphor for sexual awakening – indeed, Justine’s experimentation in this department is intrinsically linked to her newfound desire, as evidenced during a late-night hookup in her dorm room that climaxes (literally) when she finally manages to get a taste of blood. But Ducournau has a few more tricks up her sleeve, including an exploration of male sexuality as Justine’s gay roommate (Rabah Nait Oufella) struggles with his identity, and a shocking plot development in the second act that contextualizes Justine’s sudden change in appetite.

Drawing clear inspiration from horror greats like Dario Argento and David Cronenberg, and anchored by a fearlessly vulnerable performance by Marillier, Raw is an unflinchingly audacious debut from Ducournau. Its subject matter will likely prove too lurid for most audiences, but genre fans will eat it up – no pun intended.