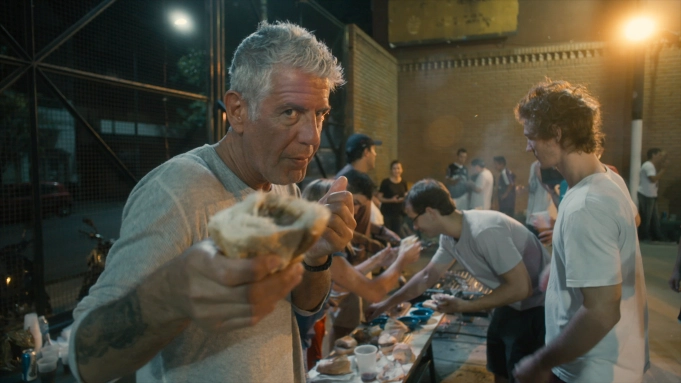 Roadrunner: A Film About Anthony Bourdain starts by addressing death, specifically that of its subject. But in this case, it’s not the award-winning chef and television personality’s actual death being discussed, but rather his theoretical death, a subject on which Bourdain feels it’s therapeutic to ruminate regularly. “What happens to my physical remains is of zero interest to me,” he says, before adding a caveat: if, after he’s gone, his body might be used to provide some sort of perverse entertainment, such as being fed into a woodchipper and sprayed all over a posh department store, that would be just fine. “I wouldn’t mind being remembered that way.”

Somber musings such as this are sprinkled throughout Morgan Neville’s engrossing documentary, which follows Bourdain from his overnight success as the bestselling author of Kitchen Confidential to global stardom as the host of No Reservations and later Parts Unknown. So much of Bourdain’s life occurred in front of the camera that Neville has mountains of footage from which to draw, and Bourdain’s tendency to write (and often rewrite) his own voiceover material for the series allows him to practically narrate the doc himself. The charisma and sincerity that made him such a magnetic figure is on full display here, but Roadrunner also gives insight into the ever-present darkness that Bourdain seemed desperate to escape.

Bourdain may have led what many would consider to be a perfect life, but Roadrunner isn’t afraid to show us the other side of the coin, revealing that he never quite grew comfortable with the level of fame he achieved. Initially bemused at the notion of being recognized on the street, Bourdain became increasingly discontent as the years passed, at times not even wanting to leave the privacy of his hotel room. Smothered by the constant presence of a film crew, he wondered aloud if he would ever be happy. “It would be nice to buy something that would fill some hollow part of my soul,” he says at one point, and although comments such as these are emblematic of his television persona, it doesn’t exactly ring false.

Close friends and professional colleagues, many of whom worked alongside Bourdain for decades, all have similar recollections of the celebrity chef’s addictive personality; he managed to kick a heroin and cocaine habit in the 1980s, but this only gave rise to his legendary drinking prowess; his second wife, mixed martial artist Ottavia Busia, notes that his interest in Brazilian jiu-jitsu quickly grew into an obsession; and his fixation on traveling to new locales and indulging in new experiences kept him on the road more than 250 days per year, ultimately leading to the dissolution of two marriages and a growing chasm between himself and his daughter.

The final stretch of Neville’s film is apt to be its most controversial, as it charts Bourdain’s whirlwind romance with Italian actress Asia Argento. A prominent figure in the #MeToo movement — who was subsequently accused of sexual assault herself, something the film omits — Argento became yet another addiction for Bourdain. The various talking heads that populate the film, from longtime producing partners to close personal friends, are almost universally negative in their assessment of Argento’s influence, and although the film stops short of blaming her for Bourdain’s downward spiral — he hung himself just days after the publication of tabloid photos showing Argento with another man — Roadrunner makes little attempt to absolve her of any guilt, save for a single comment from one of Bourdain’s pals: “Tony killed himself.”

At the end, Roadrunner is a messy and complicated film, which might be the ideal vehicle for examining the life of a man with those same qualities. It celebrates Bourdain’s passion for food and travel, which he tried to use as a means to become a better version of himself, but doesn’t shy away from confronting some of the more unpleasant truths about the pain and destruction left in his wake. We’re simultaneously left with a better understanding of Anthony Bourdain, the human being behind the onscreen persona (although admittedly, there’s little difference between the two), and yet no closer to making sense of his tragic death.