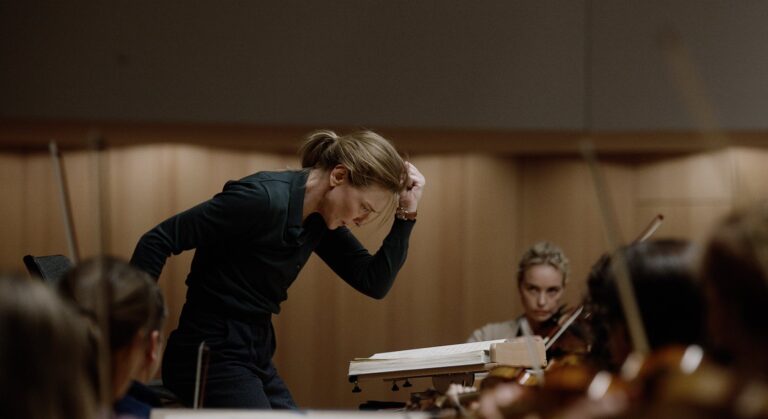 If one should find themselves seeking irrefutable proof that Cate Blanchett is one of the greatest actors alive today, they need look no further than TÁR; not only is it a strong contender for the best work Blanchett has ever done, it’s also one of the most captivating performances I’ve seen in my lifetime. Teaming with writer and director Todd Field (in his first effort since 2006’s Little Children), Blanchett introduces us to Lydia Tár, a world-renown conductor of classical music who currently heads up the Berlin Philharmonic, where she’s rehearsing for a recording of Mahler’s Fifth Symphony, prepping for the release of her eagerly anticipated memoir, and desperately trying to keep various skeletons confined to her closet, lest they burst forth and ruin everything she’s struggled so hard to build.

Field wastes no time immersing the audience into the world of classical music, opening the film with a lengthy sitdown interview between Lydia and The New Yorker‘s Adam Gopnik (playing himself) that establishes her meteoric rise to stardom. It’s also our first opportunity to glimpse the magnitude of Lydia’s intellect, her creativity, and most importantly, her ego; she may feign the slightest bit of humility for the benefit of her public persona, but the truth of the matter is that Lydia is so blinded by her own perceived greatness that she’s become convinced of her invincibility. Flanked by her long-suffering assistant (Portrait of a Lady on Fire‘s Noémie Merlant, superbly understated) and a wife (Nina Hoss) blessed with a saintlike level of patience, Lydia plows through life with little regard for the devastation left in her wake, regardless of who she victimizes; in the first act’s most riveting sequence, she castigate and humiliates a BIPOC student taking her seminar at Juilliard over his disdain for Bach, smirking proudly as he flees the lecture hall.

Is Lydia Tár a monster? There’s certainly a strong argument to be made, but Field writes her (and Blanchett portrays her) as much more complex than this simplistic definition might allow. Her monstrous qualities are on full display, but there’s another side of Lydia — loving, affectionate, tender — that manifests in fits and starts, particularly in scenes featuring her adopted daughter; as her wife observes, it’s the only relationship in Lydia’s life that has never felt transactional. That particular definition feels especially damning in the light of persistent rumors about Lydia’s alleged impropriety with her younger female pupils, and accusations that she exploited her power and status to torpedo the personal and professional life of a promising young violinist.

There’s almost nothing sympathetic or likable about Lydia Tár, and yet we can’t help but feel drawn to her, can’t help investing in her fate even against our better judgment, and this is a credit to Blanchett’s prowess as a performer. To say that she’s at the absolute peak of her powers here feels like an understatement; that she can be at once so charismatic and so detestable is no small feat. Much like Lydia herself, Blanchett is operating at a level of achievement bewildering in its enormity, and so magnificent that words hardly seem to suffice. That sentiment also extends to the film: it’s bold, audacious, provocative, and Field’s best work by a significant margin. Hopefully we won’t be forced to wait another 16 years to see what he does next.