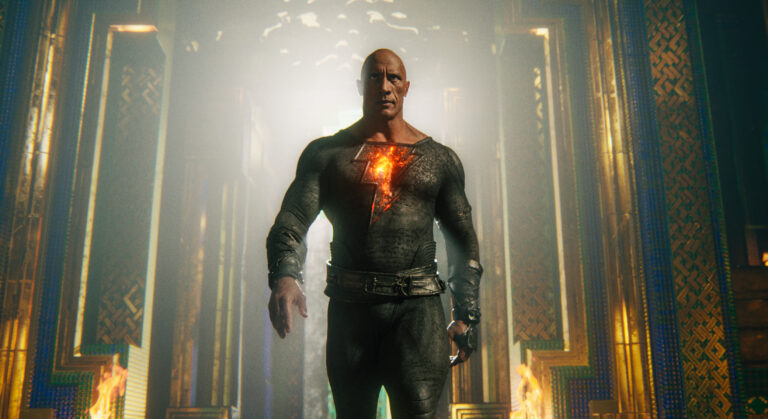 After over a decade of promises, hype and false starts, Dwayne “The Rock” Johnson finally gets to star as the titular character in his DC Comics passion project, Black Adam. One of the most powerful characters in DC Universe and the antihero archenemy of Shazam, the violent character’s solo origin film has been promised to usher in a new era for the DC Extended Universe or DCEU.

Whether that new era is something for audiences to be excited about will be up for a good helping of debate after viewing the film. Black Adam is heavy on action and light on establishing characters and its place in the DCEU. Director Jaume Collet-Serra (Jungle Cruise) unapologetically starts the film with an awkward 300-style knock-off intro and never takes his foot off the gas from there, although you have to respect that this film never tries to be anything but a silly, popcorn blockbuster ride.

From there, the minimal plot that drives the film sees young slave Teth-Adam of Khandaq imbued with the powers from the famed Council of Wizards, long before Billy Batson in Zachary Levi’s Shazam. When he re-emerges in modern times, the Justice Society of America (the pre-cursor to the Justice League) comes out of retirement to capture and imprison Black Adam before his off-the-scales power levels can once again threaten humanity.

The Justice Society is both the best thing about Black Adam and the most disappointing. To Black Adam‘s credit, over half of the film is the advertised throw down between the JSA and Black Adam. This small, but wonderful version of the super team of both young and new members is thrust into the film with zero setup or backstory. How do they fit into this timeline? Does the world even know who they are? There are tons of implied history between lead members Hawkman (Aldis Hodge) and Dr. Fate (Pierce Brosnan) and yet their existence doesn’t seem to have impacted this world’s pop culture or even a general public awareness; alternatively, the Justice League are referenced in numerous conversations and plastered on posters and comic books all throughout the film.

Once you can move past the head-shaking introduction, the characters shine through with terrific cast performances and quite a few amusing interactions. Pierce Brosnan is a delight as Kent Nelson aka Dr. Fate, a near god-like otherworldly magical entity inside a golden helmet that possesses anyone who dons it. His friendship and respect with Hodge’s Carter Hall aka the super-suited Hawkman does wonders with the paper-thin script for the characters. If Warner Bros. doesn’t lock down Brosnan for a Samuel L. Jackson/Nick Fury style role in the DCEU, it would be a huge wasted opportunity.

Hodge would also be a superb choice in that type of role since he’s also the de facto leader of the Justice Society. His amusing, frustrated mentor role with the bubbly rookie Atom Smasher, played with shades of Tom Holland likability by Noah Centineo, brings some unexpectedly big laughs throughout. Quintessa Swindell is also adorable, with a little girl’s rainbow dream look for the fellow rookie superhero Cyclone. Smasher and Cyclone have an under-developed but endearing friendship, thanks to the actors’ chemistry, that grows during their trial by fire.

As for Johnson himself, his patience to play Black Adam pays off in what should be a springboard role to bigger things in the DCEU. The more-muscled-than-ever actor gets to truly do some massive level destruction and pulls no punches with his accurately vicious take on the comic book antihero. Black Adam kills, and kills everything — human, demon, or whatever — and Dwayne Johnson is loving every minute. He also develops a relationship with the young Amon (Bodhi Sabongui) that clearly took inspiration from the Terminator and John Connor in T2. The boy teaches Black Adam about modern times and superhero culture, resulting in another collection of surprisingly huge laugh out loud moments that are slyly setup.

As with many superhero startup films, the third act suffers from a lack of creativity. The hidden true villain of the film is a bore and starts a collection of cinematic cut scenes seemingly lifted from a video game. The DCEU is also doing a fair amount of setup and world building by the last act with an unexpected cameo or two that adds little to the story outside of referencing other DC properties. Although, despite sadly being spoiled publicly, the mid-credits cameo got a huge reaction from my screening crowd.

One area of Black Adam that definitely deserves a shout and heavy praise is the costume design. Black Adam himself sports multiple, subtle variations of his costume throughout and they all look spectacular. Not only that, but the Justice Society, as a whole, look stunning: the colors, the unique styles and comic book accurate final product pop in all the right ways. Again, more Justice Society please, because this is a better, more entertaining film because of their inclusion.

Black Adam has big issues and all the shortcomings of a superhero origin, but survives on nonstop action and colorful, endearing cast performances. Johnson should feel secure that his brutal antihero will be a thorn in the side of the growing roster of DCEU heroes for the foreseeable future.